When you become her 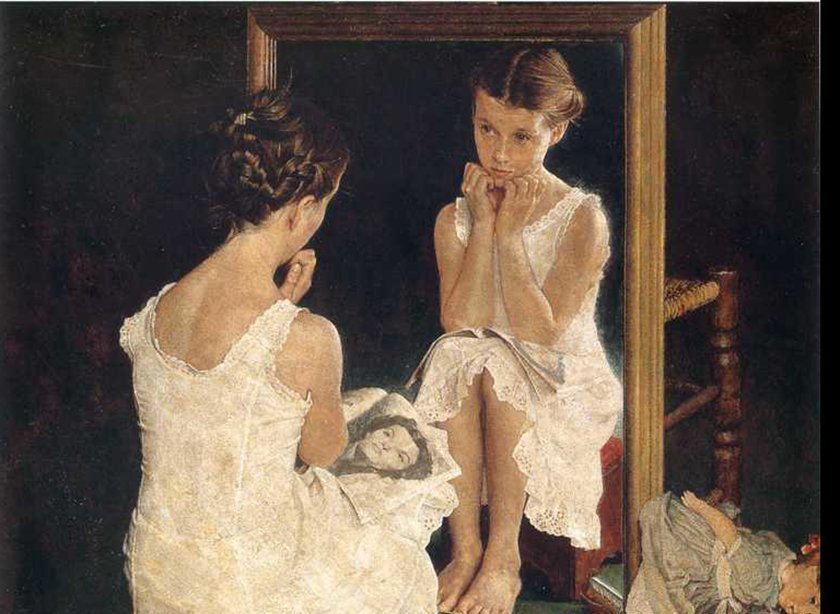 At all ages, at all times, mirrors play tricks...
I

usually avoid mirrors. But one caught me unawares the other day. To my surprise, the person in I saw in it was not me but my mother. Who else’s knees sag that way or has hands spotted just so?

After a lifetime of rolling my eyes and swearing not to be like my mother, it came to this. Mom had sneaked up on me in my own mirror and had a good last laugh.

After my encounter with mirror Mom, I noticed and reflected on other ways in which Mom was enjoying her prank.

Some of them were genetic, such as that sagging and spotted skin. Apparently I sound just like her too, or so say Mom’s few surviving friends who get a shock hearing me on the phone. My voice isn’t the only reminder of her. Too often, when my tongue grows sharp, my children say “That was the kind of snappy comment Grandmother might make.” Or they laugh at my mother’s 1940s slang, still alive in me when I use “swell” as an ironic putdown, or say someone has been “buffaloed,” or use “nuts” as an expletive.

Yet some of the resemblances are irresistible, so kneejerk — not even my best intentions can contain them — that they might as well be genetic. If I were an adolescent, I’d roll my eyes at myself. My own collection of carefully washed and re-used plastic bags is almost as fine as my mother’s. The piles of paper on the desk I inherited from her are depressingly like hers. I now know her claims that they were organized were really true.

Some manifestations of my mother in me have more to do with being my mother’s age than with her per se. I see my younger self mirrored in my dog’s desperation when I’m slow getting out the door for a walk. What took Mom — and now me — so long? Why did she always have to run back for a last dollop of hand cream or lipstick or a handkerchief? I now know it was for age-dried skin and a nose that drips more than it once did.

Some of the resemblances are so kneejerk that they might as well be genetic.

Some things I do like my mother now make sense. Like the drawer full of fancy lingerie I no longer wear and recently gave away. As I cleared it out, I remembered as an adolescent telling Mom she should wear the embroidered silk lingerie in the back of her dresser drawer instead of the more sensible cotton stuff she usually wore.

Sometimes, I actually try to be more like my mother.

I used to wish she was more “diplomatic”. I’d cringe whenever she ambushed one of my father’s patronizing colleagues, who never dreamed the little lady had an almost photographic recall of the “Wall Street Journal ” (before Rupert Murdoch dumbed it down). Mom was a tireless warrior against then-un-named “mansplaining”. Too refined to use its acronym, Mom called it bullshit when she saw it. I wish I were so fearless.

As a child, I hated the yard work my mother made us do. She was good at it and loved it. She pruned and planted with enthusiasm and positively relished shoveling snow and chipping away at sidewalk ice. Since moving from an urban apartment to a rural setting, my own yard, garden and snow bring constant work, which I’m beginning to like.

As I go about it, I see my mother almost daily. I grip an ice chopper just the way she did. My gardening pants, as faded as hers, hang on my aging body just like hers. These frequent sightings of my mother in me bring me into more frequent — and intimate — contact than we probably ever were. She is closer yet farther, a paradox that defies physical laws.

Alas, as age takes my friends’ parents and as unnecessary deaths rise week by week, the paradox of being far but near is all too frequent. Thank goodness it’s also a consolation.