When weakness was not an option 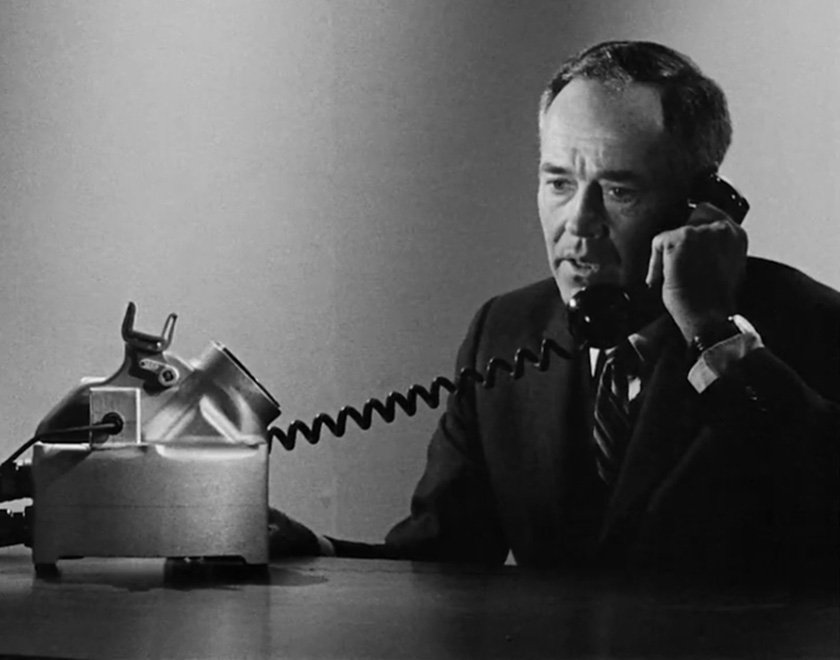 Henry Fonda as the U.S. president in the harrowing "Fail-Safe."
I

The American president pleads with the pilots to return, but they have passed the so-called fail-safe point and ignore his entreaties as a possible enemy ruse.

All but one of the planes in the American group are shot down, thanks to information reluctantly provided to the Russians by the U.S. Air Force, but that one B-52 makes it through and completes its mission. The Russian capital is erased.

The American president, played by rueful Henry Fonda, is faced with two choices. On the hotline with his Soviet counterpart, he must either enter into a world-obliterating war or make an inconceivable choice: detonate  bombs of similar magnitude on unsuspecting New York City, this to prove his planes were in fact misdirected and level the playing field. The immediate death toll is estimated at three million, with more to follow.

He chooses to destroy New York. The alternative, all-out nuclear war, would come at too high a price.

So convincing was this scenario that the military insisted the filmmakers include a disclaimer that appeared at the start of the movie. What viewers were about to see was the fruit of implausible fiction that could not happen.

I reluctantly use this forgotten bit of the past to enter into a debate that concerns the present, the spread of a global virus and what to do about it.

Though Cold War days are long gone, let me advance a set of circumstances that may explain why skeptics are wary of the world’s stop-everything response to the virus, sensing the “cure” might be worse than the disease itself. My own view also comes with a disclaimer. It is hypothetical.

He chooses to destroy New York rather than destroy the planet.

With these ground rules established, let us suppose for a moment that in that “Fail-Safe” year, 1964, a virus brought back from Vietnam by American troops began to contaminate the United States and then spread to some of the countries of Western Europe.

But not to Eastern Europe or Soviet Russia.

Let us further suppose that this sickness was killing hundreds of thousands, and that medical facilities had no means of coping with the volume of patients.

Could the United States, then the full-scale protector of Western Europe, have decided to lock down its industry, send people home, and advise its European allies to do the same?

The answer is no, it could not.

In its delicate and razor-sharp stare-down with communism, it could not and would not have dismantled both its social pretext (democracy and its communal freedoms) or undermined that pretext’s key functions, business, industry, and its underlying ideology, capitalism. Nor could it have asked still-fragile Europe, only in the first phases of its road to recovery, to risk a relapse into ruin that would result from freezing its suddenly tangible industrial output.

Such a slowdown or freeze would suggest that the American way of life was too soft, and too fragile, to deal with any sort of severe test. Any kind of lockdown response would have emboldened the Soviets in an unacceptable way, or so the going logic would have suggested.

At the time, posing was everything, and exalting the American way of life a cultural and political linchpin in the propaganda battle for control of the future.

In this, my fictional circumstances, the U.S. and Europe would have been compelled to take whatever human losses necessary to avoid the “greater” loss, and to safeguard what they perceived as the common good, seen ideologically and not medically.

Had the Soviets offered medical advice, it very likely would have been refused. The same holds true for advice from any country under communism’s sway.

A few million dead can be part of the price of keeping democratic institutions intact.

Since Eastern Europe, Russia, and China were in their own way already locked down, the likelihood of this western virus spreading to “enemy” soil would not have been high. Few flew to Moscow, let alone what was then called Peking, the capital of a Mao-run China that was even more sternly repressive and doctrinaire.

In fact, the U.S. military, in this fictional time of plague, would have been placed on high alert, with key personnel in quarantine, so as to respond effectively if the Soviets chose this vulnerable time to attack.

The moral of this speculation is simple: apply both context and perspective before making value judgments. To the extent that it is possible, set aside sentimentality and keep hyperbole in check. Look well beyond the moment and consider the socio-political consequence of actions, drastic ones especially. The final exchange between the president and his translator does not concern the grotesqueness of what has just transpired, but what the weather outside might be like.

In certain times it is impossible to show, let alone emphasize, aspects of real distress, whether medical, cultural, or military. You must put a brave face on the awful, reckoning that a few million dead from a virus is, or can be, part of the price of keeping democratic institutions intact.

Moreover, the Soviets, who lost some 20 million soldiers and civilians in World War II (slaughtering many of their own), would have found little that was tragic about a few million casualties from an uncontrollable illness (just as Vladimir Putin now says as little as possible about Russia’s internal viral situation).

Again, the critical word is context.

Today’s response in today’s world makes sense, or some sense, though it chooses to bypass “way of life” issues, considering them antiquated. Human life and health are the only priorities.

In 1964, they would have been the most central of priorities, and the sight of a forcibly depopulated and commercially dead New York City an anathema to the vision of the world America wished to transmit as the preferable norm for decades ahead.

Had my fictional 1964 virus come to pass, it would be known in those days as the “Great Virus of 1964,” one the West was forced to endure at great cost to make way for its Cold War triumph and the expansion of democratic prosperity, preferably unhindered by publicly ugly reversals.