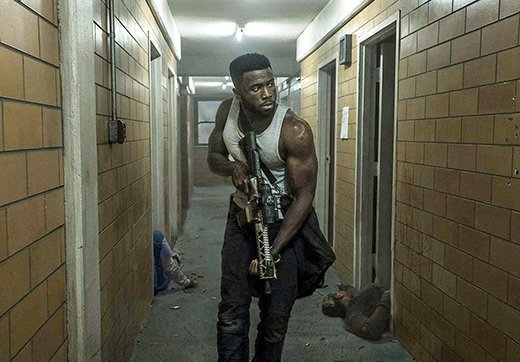 irector Gerard McMurray’s “The First Purge” is a prequel in a franchise constructed on a rather silly social science premise that the United States needs a night of sanctioned violence to vent frustrations and make the country less violent and crime-ridden. No crimes committed during The Purge’s 12 hours will be prosecuted. People are paid to stay in The Purge zone (in the film, Staten Island, standing in for the black ghetto — but filmed in Buffalo, New York) and paid more if they commit violent acts.

This, the fourth in the series for the low-budget horror production company, Blumhouse (“Get Out!”), is overtly political. The opening scene features a television advertisement for a third party, New Founding Fathers of America (NFFA), endorsed by the National Rifle Association, that has recently won the Presidency. The ad appeals to the need to curb violence, opioid abuse, and unemployment. “You’ve lost the American dream,” the NFFA politicians intone. Perhaps because of its political message, this latest ed≠≠≠ition has been less appreciated at the box office in its first weekend than the others, which used the night of authorized mayhem to tell horror stories.≠≠≠≠≠

Almost all the named characters, and most of the secondary ones, are black and poor, people who would need the money from participating in The Purge. Being black and poor in a country rife with racial and class divisions inevitably involves strategic assessments, decisions about how to act and what to do about one’s “situation.” In periods of social and political complexity and conflict, the strategic options are unusually diverse. In the 1960s, blacks could opt for Martin Luther King Jr.’s integration, for Stokely Carmichael’s black power, or for the armed confrontation of Oakland’s Black Panthers. In today’s climate of division and extremism, the options include believing that all white people are to be feared and distrusted (as in the film “Get Out!”) and idyllic Afrocentrism coupled with social reformism (“Black Panther”).

“The First Purge” is less thoughtful and important than either of those films, and the violence that dominates its second half can make it seem as if the film has no message at all, that it lacks the concern with different positions and approaches that characterize the best black-focused films. In fact, this prequel offers a variety of strategies, though perhaps too many, and none fully developed.

The strategies are represented by a pacifist, Nya (Lex Scott Davis), who chants “Don’t Purge…Don’t Participate” to black and poor people lined up to get their $5,000 for just staying in The Purge area for the full 12 hours of the experiment. By teenager Isaiah (Joivan Wade), who timidly tries to enter the drug world. By praying church-goers. And by the business-like drug king, Dmitri (Y’lan Noel), who is making millions exploiting the community. Like “Get Out!”, The First Purge offers a strong dose of “white people in power are evil.”

There’s a second stage of The Purge, and to avoid a spoiler, not all details of the experiment are revealed here. Suffice it to say the black church sanctuary is violated by guys in white sheets and pointy-headed white hats. The social scientist, also known as “The Architect” (Marisa Tomei), is the only thoughtful white person, and she’s proven a naïve tool. Characters undergo conversions. The pacifist takes up arms. The drug dealer sheds his suit, strips to an armless t-shirt and slings a cartridge belt across his chest. Think “Rambo” meets “Die-Hard” as he single-handedly—almost—frees the tower from the bad guys.

“The First Purge” is an intriguing film that fails to live up to its potential. Its premise is too flimsy, its politics too unsophisticated, its characters too one-dimensional (or too simplistically two-dimensional), its message too messy, its lapse into violence too easy and predictable. For some of the same reasons—the politics of being poor and black in today’s America, the unusual premise, the difficulties of finding a strategy to challenge government-endorsed violence —it’s also worth watching.