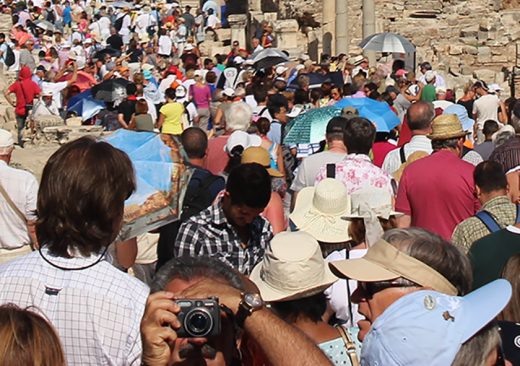 The ancient Greek masterpiece that is Ephesus (in Turkey) as seen in 2015. Crowd density is such that it can take two hours to walk a single mile. Author photos.
I

t does not matter how slowly you go as long as you do not stop. • Confucius

Last year, Conde Nast publications published a list of fifteen “beloved places struggling with over tourism,” an awkward way of saying too many people were coming to town. The list included Angkor Wat, Machu Picchu, Iceland, and the Greek island of Santorini. In highlighting the problem, Conde Nast ironically contributed to it by detailing the joys of these destinations.

In a 15-minute Internet search, I came upon more than a dozen travel sites decrying tourist abuse. Reading all this made me lament the loss of pristine yesteryears in places like Barcelona, Mallorca, and even Wyoming’s Yellowstone National Park. Just last June, the “Atlantic” magazine ran a story on Yellowstone with this panic-button opening: “Massive crowds are causing environmental degradation, dangerous conditions, and the immiseration and pricing-out of locals.” 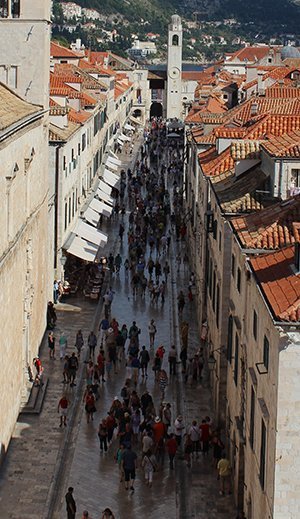 Tourists seen filtering into Dubrovnik’s Old Town in 2016. The city now restricts Old Town tourist numbers to 8,000 at any given time.

Setting aside that the author of the “Atlantic” report violated Mark Twain’s helpful advice to writers — “Don’t use a five-dollar word when a fifty-cent word will do,”— the blame for these woes was pinned on the wrong people.

Tourists, a trickle or an avalanche, are not the problem. The locals are.

I know, “them’s fighting words,” so let me explain.

First, there’s no doubt tourists can be, as we say in my home state of Hawaii, a pain in the okole. Living off the famed “Road to Hana,” a scenic coastal stretch of local highway, I can’t tell you the number of times tourists have appeared at my cabin door to photograph the waterfalls in my backyard. This was no mean feat by visitors, as there is neither a driveway nor a road leading to my house. Believe me when I say I have sympathy for locals who complain about tourists.

What is ruining the places I’ve mentioned, and many others like them (if they’re in fact being ruined), are state or national policies that allow an unlimited number of tourists to visit. The reason for this unfortunate approach can be boiled down into one word: greed. More tourists bring more revenue, as in cold hard cash. It’s a mathematical equation. Tourists equal money. Money is good. Therefore, tourists are good.

Tourists, a trickle or an avalanche, are not the problem. The locals are.

Today, many global destinations are concluding that this equation is false, or, if not false, potentially harmful. Sadly, Maui is not one of them. I moved to Maui in 1996. Today, the island has a population of about 150,000 people — and nearly three million annual visitors. We are overrun by strangers. Our once clean air and lazy roads are choked with rental cars and exhaust fumes (neither of which make Hawaii’s PR ads, of course). Our rents are celestial (a one-car garage, converted for habitation in a small backyard, can fetch $3,000 a month).

But none of this is the tourists’ fault. It’s the fault of corporate businesses that build hotel megaliths on the shores, and the Maui Visitors’ Bureau, which would love to see six million people drop in annually.

Thankfully, many of those in charge of tourist hotspots in other places around the world have begun to realize they have only themselves to blame for their mess, and are beginning to do something about it. Their thinking is evolving from “let’s make money!” to “let’s be good stewards of our home.” It is a great and badly needed change in approach and perspective.

Last August, Italy’s Transport and Infrastructure Minister Danilo Toninelli announced that the city of Venice would divert one-third of its cruise line visits elsewhere – too many tourists were killing the World Heritage City. The Peruvian government has limited the number of visitors to Machu Picchu to 2,500 per day, and the famed Inca Trail lets in no more than 500 per day. I was there last April. The park was anything but crowded.

Dubrovnik is using cameras in the Old Town to limit the number of people there at any one time. If tourist numbers approach 8,000, authorities intervene to deny town access.

Locals are not the only ones that need to change their attitude. Tourists must grow more aware of their presence and impact. They must shake off the sense of entitlement so many bring with them on their travels. When I registered (and paid) to go to Machu Picchu, I could not go on the days I wanted. They had been sold out. I could change my plans or decide not to go. Being forced to choose represents constructive change that tourists must be forced to face, and accept. Just because you want to see a place doesn’t mean it’s your birthright. Seeing the world at a slower pace is not a bad thing. Go next year. Visit someplace else.

Time will tell whether these restrictions work, and spread to other sites choked with visitors. After the recent catastrophic flooding in Venice, several locals were quoted in the media as saying Venice still needed tourism. But the flooding damage has severely reduced the tourist count, which will pressure authorities to relax new restrictions. Will they?

I have my own solution to the tourist glut: defenestration. How’s that for a five-dollar word?