The I in me 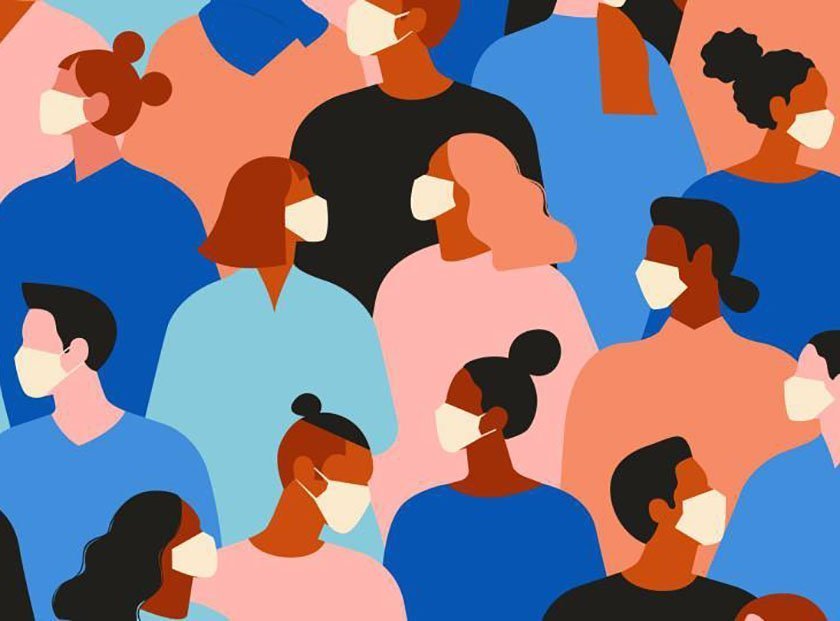 Safety, if transformed into a relentless form of alarm, can soon turn sinister.
N

ear-blindness makes the masked people look like mutants. The store innards seem to me like a place occupied by a race of aliens, either newly arrived or imagined. But they cannot be imagined since they make the same sounds they always have, only muffled and sometimes garbled, as if a known language was being filtered through the slowing lacquer of water.

In fact, the whole of this period is like being inside a pool, stuck beneath the surface, watching a great slowness evolve into movement.

That slowness of course is life in the midst of an infection that has left some people bored and vaguely agitated, others half-crazy with anxiety, even terror.

I am alone. I do not have parents or grandparents, children or their offspring. I cannot tell the tales many tell me of visiting some very aged parent, worrying all the while about microbes or imagining scenes they’ve seen time and again on television of packed hospitals. Much like post-9/11, they are traumatized not only by what’s happening but what they’re told to fear, which can acquire an insidiously larger dimension if repeated sufficiently. And it is.

This, said my mother, was the trick of the popes, not to make grand pronouncements but to repeat the same bits of scripture time and again until memory and memorization became one, and faith inextricable from what you to hear, at least if a God figured in your life.

God still figures in Italian life, wholly or marginally or scoffed at, but he exists, and this swirling around of faith makes guilt swirl also, and any virus sane of mind can’t but help like the combination. Fretting and cheer merge into a quiet sense all is not right in the world and perhaps some higher power had something to do with it.

Those in my dream will shout aloud, demanding to live their lives for as long as their lives might last, infected, uninfected, no matter.

My oldest Rome friend says she can tell more about human nature in dealing with the masked than before in dealing with often fake smiles. Now, she says, all is hidden and therefore known. You can tell in the timbre of voices or how people react, or simply how interested they any longer are in your life, which before they appeared to be, or so she tells me.

I come from another time of history, so I wonder, stirred by my dislike of authority, how it is a society, not one but many, can accept the orders of those who say distance is a must, as are masks, and groups cannot gather, all of this for the public good. To which once I would have rebutted that the public good cannot exist without the very things being quashed, even in the name of medicine and health. But I am a rebel, a blind relic of a time that grew nervous around too much central authority and too many experts sure of their political or social diagnoses.

In my mind’s eye dreams I imagine revolts by those who shake a fist at being threatened by the dead and the dying, threatened in effect by statistics. They will shout aloud, demanding to live their lives for as long as their lives might last, infected, uninfected, no matter. I remember the small anti-Vietnam button I once wore that read “500 more today,” in reference to the dead. For a while it seemed like marketing fatalism, but over time the resentment grew and something changed, complacency exhausted.

But fear is inexhaustible and this virus has the upper hand, at least for now, revered as a deity of sorts, a golden calf, since very little can bring the whole of many societies to attention.

If only those same societies could acquire stoicism, regaining a stiff upper lip that has sagged, thinking of the future and not the now, which requires living life with the virus, not in its life-upending thrall.

I am of course outnumbered by medical rationalists who want only to be told what to do, since science is their anti-God and commands undivided respect, as do their grandparents.

I stay moot, go out little, speak rarely to the aliens I no longer recognize but occasionally call me by name, as if they knew me once on another planet.

And perhaps they did, because this planet and the one I could still see in bear little resemblance one to the other. I have been outrun by two sicknesses, and perhaps by the love of crisis, of public drama, without which this warless planet can no longer live.

When the virus recedes, climate anxiety will return to preeminence, and with it consternation that another malady might be lurking, to which media, institutional and social, will dedicate thousands of worried hours.

By then my eyes will draw a blank, thankfully perhaps, and the masked will be no different from the mask-less, the I in me become alien.