When the U.S. played God 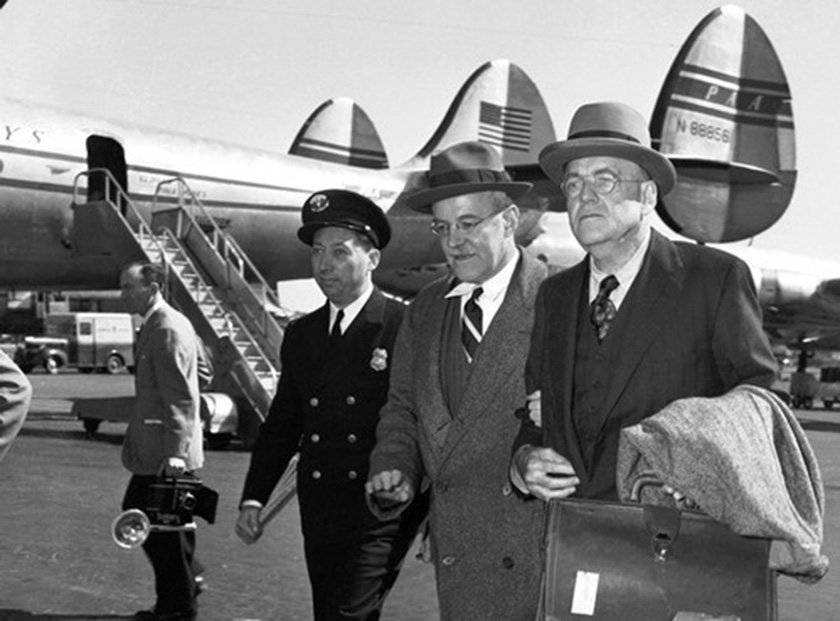 John Foster Dulles and Allen Dulles, two brothers who changed the world — but not in a pretty way.
B

eware the old days. Old they are – always. But good is another story. Take the year of my birth, 1953. I was then just a tiny made-in-Paris American.

At the time, my noble nation was just getting a feel for political internationalism, and the newfangled CIA was its favorite toy. John Foster Dulles was Secretary of State, and Allen Dulles, his brother, was the Director of the CIA. John was steeped in righteousness, and Allen was an ardent pragmatist obsessed with getting at the communist empire from the inside by eliminating all those marginally relevant foreign leaders who were looking to Moscow—which, in the minds of elite Washingtonians, meant not pledging allegiance to America and its war hero president, Dwight Eisenhower.

The period was rich with covert operations rarely shared with the press and never at all with the public.

When the Iranian Prime Minister nationalized the Anglo-Persian Oil Company, raising Churchillian ire, the CIA went diligently to work to depose him. The operation was almost entirely funded by Washington and soon he was replaced by the Shah, a dubiously royal luxury-loving figure who immediately pledged allegiance to the West. The Dulles men were thrilled, as was Churchill. Their good deed lasted three decades before creating a tsunami-like reaction that made even the original meddlers take pause.

The CIA saw red and soon the progressive government was replaced by more reasonable people, namely those more friendly to American interests.

Then there was Guatemala, dirt poor and the colonial fiefdom of the United Fruit Company, an American multinational that traded in all kinds of Central American fruit—mostly bananas. When the Guatemalan government began nationalizing lands the multinational considered its own, and even worse, when it hiked basic wages, the CIA saw red and soon the progressive government was replaced by more reasonable people, namely those more friendly to American interests. Again, hardly anyone outside Guatemala knew what had happened. Most American newspapers tucked these sorts of actions into the anti-communist fold.

The French knew better, largely because the United States had directly funded its final and ill-dyed efforts in French Indochina, soon to be divided between North Vietnam, a nationalist state, and South Vietnam, a lackey anti-communist nation all but invented by Washington to keep the northern union at bay.

Yet another bit of good time thinking arrived in the form of a change in American defense policy. The U.S. wished to spend less on ground troops and arms, and since the CIA was showing much promise with its handiwork, the U.S. concocted the policy of massive deterrence. Any attack on American interests would be met with an immediate nuclear response. This satisfied three tireless scientists who had just perfected the hydrogen bomb. Washington actually thought to use the bombs to assist the beleaguered French in Indochina but backed off when someone with a modicum of wisdom and clout pointed out that dropping such a bomb would annihilate both the bad guys and the good, leaving the vaporized terrain free of communists and French warriors. Happy days indeed.

This of course did not deter either America or Russia from testing such bombs in the open air(the French also joined in) until the Nuclear Test Ban Treaty of 1962.

On the positive side, at least in America, the Supreme Court ruled unanimously to end separate but equal segregation, a blight on the country for decades. This did not, however, put on end to the lynching of black people, nor to racial violence. Blacks headed north, hoping for a safe haven in northern cities—but of course the reality was that the north was not always so much safer than the south. This led to considerable Soviet propaganda about American inequities, and many decades later led songwriter Randy Newman to pen “Rednecks,” a brutally sarcastic song about northern racial openness—and it contains a verse that would likely not pass muster in this age of repressive righteousness.

“We are keeping the n*****s down.” (Google, among others, cannot allow itself the honesty of writing out the offending word “nigger,” as if by not doing so it was never in fact spoken.)

No nation on the planet is pure in motive. Some are crueler than others, but all have a morality based on expediency.

So the good old days of my infancy were not necessarily so good, despite sleek cars and affordable housing. I was of course, at that time, a mere slab of flesh. Later, I would come to understand that no nation on the planet is pure in motive. Some are crueler than others, but all have a morality based on expediency. This includes Putin’s Russia, whose pilloried invasion of Ukraine was at least in part triggered by Ukraine’s desire to join NATO, yet another creation of the postwar period — and of the Dulles brothers. Had Greece or Italy gone communist in the year of my birth there is little doubt America would have intervened decisively. Certainly in the late 1940s, America did always intervene.

The good old days, now and always, will depend on your perspective, and whether that backwards look is at a first kiss or the times as they really were — not so good then, just as they are not so good now.

—This piece was dictated because the author has glaucoma.