When the paranoid are right 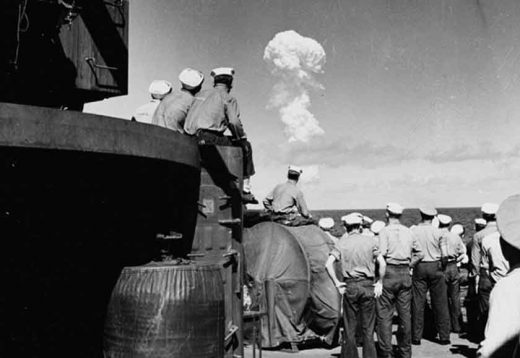 In the 1950s, U.S. sailors tountinely watched Pacific nuclear tests. Later, many would pay a price.
&

Growing up in Boston of the 1950s, I remember my father often coming home with unusual foods. He got a kick out of trying rattlesnake, turtle soup, and stinky cheeses. He also liked unusual beers, which he’d pick out at Wursthaus, a beerhouse on Harvard Square (its walls were lined with bottles from all over the world). Though they mostly smelled of skunk, we at home assumed that was normal. They were foreign after all.

Obviously, the sellers paid no attention to expiration dates, if they even existed then.

It was the height of nuclear fear, and the word “paranoia” came up often. If you didn’t trust what most people accepted as normal, you were often labeled as paranoid.

For example, we had a family friend who refused to sit in front of a window if the curtain wasn’t drawn — he could be shot at. He was also suspicious of everyone. While he liked beer of all kinds, he refused to touch the Japanese brand my father had brought home — he worried Japanese crops had been contaminated by radiation from the Atomic Bombs dropped on Hiroshima and Nagasaki at the end of World War II.

Everyone nodded but cast “he’s paranoid” glances behind his back.

When I was a kid, I loved going to buy shoes. Since I had flat feet, I was told to wear Stride Rites: they had what my mother called “steel shanks.” The stores all had a small wooden stand with a step under which you’d stick your feet. On top was a green screen where you’d see your feet under X-ray light. Yes, an X-ray machine with nothing but a wood casing in a shoe store. Kids, and mothers— pregnant and not—hung around unprotected. I loved seeing my toe bones wiggling. It was also a great way to see if kids’ shoes fit properly. But one mother trusted no one and wanted no part of the contraptions that emitted strange rays. Other parents mocked her as paranoid behind her back.

Had anyone taken my grandfather, who lived with us, to a psychiatrist, I’m sure he would have been considered severely paranoid.

It was the height of nuclear fear, and the word “paranoia” came up often. If you didn’t trust what most people accepted as normal, you were often labeled as paranoid.

He had his own set of dishes, silverware, glasses, and cups. He ate only his own food and wouldn’t consume anything that had to be touched by hand. He feared germs and contamination so much that he had to have his own bathroom.

When I was five, he was found to have tuberculosis. Because our family lived in the same house, doctors were certain my brother and I would come up positive on TB tests. We were immediately X-rayed, but the doctors were wrong. There was nothing.

Our nonno’s paranoia served us well in that instance. But his deep sense of suspicion was a constant source of torment for my mother.

There is little doubt the people I’ve mentioned here were burdened with severe and unrealistic fears of persecution. But that by itself doesn’t make them wrong about nuclear fallout and radiation in a time when people were still taking out their lawn chairs to watch mushroom clouds rise from the Nevada desert. They worried about the sinister impact of X-rays long before medical authorities curbed their use, particularly on pregnant women.

Many people with similar concerns were perfectly sane. Not because their fears turned out to be true. Who would be the arbiter of “truth” anyway?

In my own experience, I’ve observed a workplace in which several people suffered breakdowns and left. Interestingly, in each of these cases the breakdowns were paranoid in nature. The workers accused the employer of planting microphones in their offices and common spaces, of recording their movements with hidden cameras, and of being somehow singled out and made to look foolish by everyone, even by their friends and true allies.

It’s strange that all of them would have specifically paranoid breakdowns, which makes me wonder if maybe — based on the stories I remember — there wasn’t some truth to their fears.

In a sense, all paranoia has a basis of truth to it—like growing up in extremely hostile families in which violence and harsh criticism were a constant. This can convince some people that even those closest to them are actually out to get them.

Still, just because a person is paranoid doesn’t mean they can’t also be right about their worries. And certain kinds of even mildly hostile environments can push potentially paranoid people over the edge.

Likewise, just because a person is more afraid of something than most, doesn’t make them paranoid. The danger of pesticides, global warming and many perils once seen by some as paranoid conspiracy theories have turned out to be anything but.

It’s easy to pathologize what we don’t understand, and to dismiss that which we can connect to an individual’s perceived “craziness.”

Except that in many cases, over time, what we fear in a seemingly irrational way turns out to be justified.