When the Gestapo starts streaming 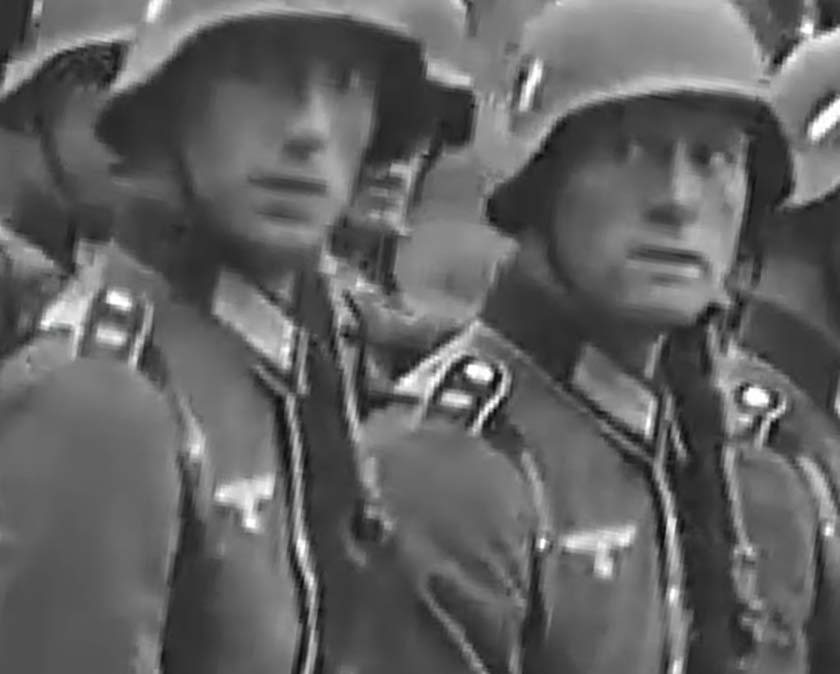 The unsettling sounds of the past.
I

­have a friend who can watch any movie, no matter how suspenseful or violent, with complete detachment. She scoffs when I have to cover my eyes in the cinema when tension or fear become unbearable, which is often for me. She marvels that I can’t see past the artifice and remain unmoved. “But it’s just a film! Can’t you see that?”

No, I can’t, no matter how often I remind myself it’s just fiction.

At some point, I discovered the “trick” — at home at least — of turning off the sound in the scary parts of movies and TV shows. Take away a thudding beat or floorboards creaking under footsteps and Voilà! I become just like my friend, able to watch anything.

The other day I discovered just the opposite.

Searching for music and sound effects for a podcast I’m working on, I ended up on Kontent Core, a music sales and licensing site.

I began clicking timidly through the 2,000,000 tracks, which can be searched by mood, genre, historic period, instrument and other technical things that meant nothing to me, such as beats per minute.

Clicking through the tracks’ “play” buttons took me on a wild and thrilling journey. And I didn’t even leave my desk chair, pay a streaming service or keep my PBS subscription up to date. In milliseconds, I was seated in a stuffy train compartment on my way to a British country house sometime between 1850 and 1914. Before I could even wonder why, I was panting as I tried to get the Gestapo off my trail in Berlin. One click later and it was a warm day in Sicily, and over a heavy Sunday lunch I probed faces for clues about a potential Mafia feud.

Take away a thudding beat or floorboards creaking under footsteps and Voilà! I become able to watch anything.

Sometimes I watched TV without watching TV. A few drum beats could prime me for a news report on a tough and complex social issue. A clarinet immediately said “World War II documentary with a Holocaust theme”.

Here was the flip side of my discovery about removing sound from movies. The music alone is all you need to create drama.

The tight connection between sound tracks and film genre were an almost depressing indication of how few cinematic tropes we have. Spy movies, war movies, and rom-coms each have their distinctive type of sound. And it doesn’t matter whether they are low-budget cheese or art house fare. The tropes often have recognizable origins. All espionage music, for example, relies on the driving beat and twangy electric guitar John Barry used for the first James Bond film “Dr. No” in 1962.

As I scrolled through Kontent Core, the titles and descriptions of the tracks made me wonder about the creative processes behind them. Did someone think “Gee, today I feel like writing something a little ‘Serious intellectual nu metal, nose ring optional’?” Or did they review their creation and say, “Gee, ‘This piece is perfect for some friendly competition or for the frustration of breaking a stubborn horse… happy and playful with a slightly more dissonant and suspenseful ending.’ I think I’ll call it ‘The Pugilist’.”

Kontent Core also gave me an idea. James Thurber’s character Walter Mitty used his daydreams as an escape from daily tedium. Why not make daydreams productive and use soundtracks to inspire greater efficiency or better work?

The tight connection between sound tracks and film genre were a depressing indication of how few cinematic tropes we have.

A soundtrack can spice up any banal activity. Who needs the car radio when you have “Picasso Takes Train” to accompany you on errands (“All Aboard the Action Train! Orchestra, Hits, Electronica Speeds Distortedly Along”). Reimagine the frozen food aisle as the exciting “Battlefield Bazaar” (“Quirky effects lead against drums, mallets and tuned bells. Surrounded soldiers hold down a tentative position in the bazaar”).

Movie music daydreaming is potent and may require a safety warning. So if you ever see me reaching into my combat boot to pull out a hidden knife and yelling that I’ve got a grenade and I’m going to use it, don’t worry, I’m probably just lost in the battlefield bazaar.