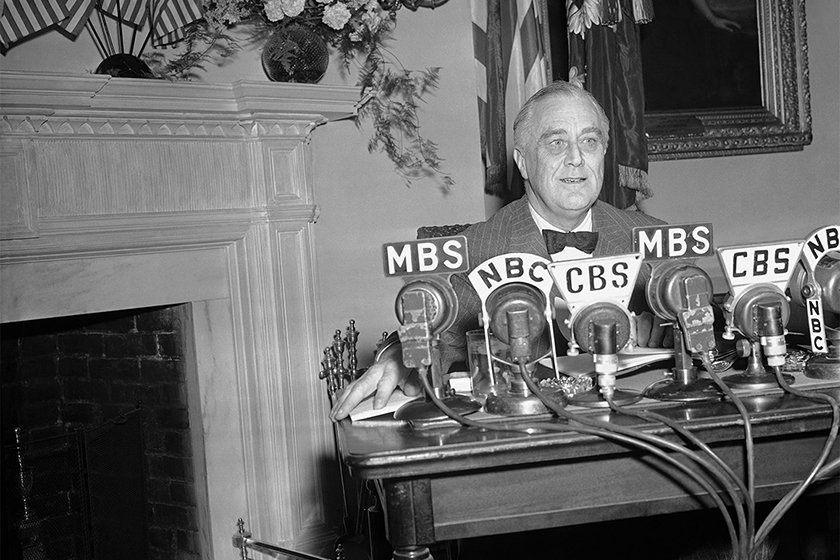 ne good thing should be said about President Donald J. Trump, and this comes from someone not remotely close to a fan.

In talking virus, the only language spoken these days, Trump, bless his barely coherent soul, continues harping on the idea of reopening and from time to time tapping out the capitalized words “good news” in his otherwise cranky carnival of messages to his sickness-ensnared kinfolk.

He’s even snapped at his top expert, Anthony Fauci, a very sensible and skilled doctor, for failing to distinguish between those dying in hospitals of the disease and those “dying” at home as they watch the life they knew collapse around them, their hard-won bits of commerce with it. It’s an unlikeable but necessary perspective for anyone willing to understand that enormous personal and workplace reversals can be morally likened to death.

Label me mad. With Trump, however, it’s love or hate, with noting at all in between.

For me, the in-between comes when someone bothers, sincerely or otherwise, to try to pump up morale.

Let the haters spit in my face; a free country also allows for spitting. After they’re through they’ll tell me reopening is an awful word, the worst idea ever, and that it flies in the face of medical science, like Nero fiddling while Rome burns.

They’ll insist capitalizing “good news” is a fraud, there’s no good news when 100,000 Americans will soon be dead, in part because of Trump’s malfeasance.

Americans need not only more testing, but a bucketful of hope.

They’ll (understandably) revert to the hackneyed default: the man is a born liar.

But here’s a situation when what’s important isn’t necessarily absolute truthfulness or statistical realities. Not when both crush the confused even further.

No, this instead is that rare instance when too much reality stands to break down what’s left of mental and moral reserves, as important as the economic ones. Americans need not only more testing, but a bucketful of hope – no matter what happens. However meager its tangible returns, hope is oxygen (which not only the sick need). Regrouping is not done through the very democratic process of emphasizing all that’s gone wrong and assigning scapegoats. Right now, most at home can do little to repair those wrongs. But they are, at the same time, desperately in need of even the slightest bit of soothing, no matter who provides it, white lies included (what’s a fairy tale but a pretty white lie to distract you from the night)? To feed the populace grim tidings on an out-of-control carousel, even if the data is correct, represents an abject mishandling of the needs of the collective psyche, at the moment frail and fearful. Truth does not always set people free, not when they’re knee-deep in paranoia and already saddled with neuroses and phobias.

In war you do not (or did not) announce massive death tolls and battles lost. “Heavy losses” was as graphic as it got in both world wars, at least in the U.S. press. Psychological warfare (later intelligence services) was created with that in mind, to scare or soothe.

The coastal hatred of Trump (which he reciprocates) has only added to the virus’s disruptions. If he says “good news” his enemies say the opposite and mock him. By now this back-and-forth is tantamount to illness of its own. True, Trump has little interest in hope aside from his own re-election and reviving the economy. He is neither deeply compassionate nor deeply… anything.

In this atrocity of a situation what matters is that leaders create a gospel of reassurance, if necessary making it up as they go and doling it out by the teaspoon.

There’s no Franklin D. Roosevelt for lucid fireside chats, so teaspoons and little gestures are about all that’s left. FDR cured nothing with those radio broadcasts. The recession held strong. He did speak clearly about complex problems – please listen to this March 1933 chat on the Depression banking crisis – transmitting a sense he had the situation in hand, comforting in its own right. He did not condescend. He did not shout.

And it will go away, all the more reason to say so aloud. Few others are.

European leaders have also failed terribly in this regard, locking people up and hoping for the best. Few have addressed the shape of the future or even attempted, without promising miracles, to put those on edge a bit more at ease. They lack both the depth and the courage, and admittedly face a more skeptical public. France and Germany, the European Unions keynote speakers, took vastly different virus approaches – France’s patriotically tough, Germany’s more adjustable – dashing any hope of an EU consensus.

But that’s no excuse.

Did Churchill, after the Battle of Britain was won, need to say, “Never have so few done so much for so many”? No. But it was a welcome tonic.

That it is Trump who broadcasts hope while intelligent people talk only statistics is painful to watch.

I have lived through many crises of many kinds. This is perhaps the most sinister because it disrupts from within, eliciting helplessness even among the healthy and the motivated.

The virus is giving them ample time to ponder the future and wonder if anything will be as it was. Right now it’s easy to say “no” because no one bothers saying otherwise, let alone emphasizing resilience.

That is an incomprehensible burden to bear for a developed world that so far has known no such challenges.

That it takes a vindictive man like Trump to clumsily broadcast hope and little white lies, and that intelligent men and women speak only through statistics and infection rates, lacking the foresight and emotional intelligence to realize they’re making the dark even darker, is painful to watch. I can only suppose they prefer to err on the side of darkness to avoid falling on the wrong side of casualty totals. It may be truthful, but it’s socially unsound. The opposite can be said about hope and reassurance: they make no sense to science, nor can they be quantified, but life can’t work without them.

So it is, lo and behold, that this Trump guy busies himself hawking patent medicine to people who want to think it works. And he does a lot of them a favor.