When soap was soup 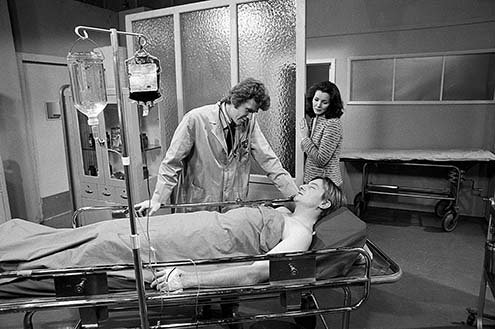 first heard about soup operas just before Christmas 1960. Our neighbor Mrs. Whitlock had come by to drop off presents but burst into tears while standing under our wreathed door. My mother consoled her and the women chatted and whispered but I couldn’t hear a thing. I urged the elephants and giraffes on my pajamas to turn on their hearing powers but they ignored me, preferring to play dumb. Pajama animals can be stubborn.

When Mrs. Whitlock finally left I asked my mother what was wrong. I knew in part. My father has spoken of their arguments, cryptically adding that both drank too much, “too many Martinis,” he said, though I wasn’t at all sure what that meant. The Martinis actually lived two blocks away and couldn’t possibly cause problems form that distance. I did worry that excessive quantities of orange or apple juice (I drank inordinate quantities of both) might also cause me to occasionally burst into tears.

This is when my mother told me in her heavily accented English that Mrs. Whitlock watched too many soup operas. I pondered this explanation. I even asked the elephants and giraffes for assistance yet again. Mum was their goofy word.

What was a soup opera? I asked my mother.

She replied with a single word, soap.

Confused, I went over to the gifts assembled underneath our giant tree, as if they might choose to unwrap themselves while unraveling this word-related adult mystery. They didn’t.

I imagined Mrs. Whitlock, being overcome by the way the distant Martinis made soup. Maybe too much soup watching led to an opera, and tears. Or maybe soup opera was kind of argument about broth that produced contagious hysterics.

But my mother had used the word “watch.” How could you watch soup, unless — and the concept interested me — it possessed it own alphabet that boiling made audible? Was opera a metaphor, a favorite nonsense word of my father’s? Had Mrs. Whitlock cooked too many soups at once and lost control of her kitchen? Had the overflow produced an opera? Were the Martinis vexed?

No reply from the gifts, or from the pajamas.

By then my mother had retreated to her dressing room, off limits to my pajama animals and me. I’d often squash my ear against her door to listen to her brush her hair as if it possessed a language I’d one day understand and master.

Maybe she’d really meant “soap” operas. But that hardly helped. Soap got me no further than soup, except perhaps something along the lines of singing in the shower. But how could you watch cleanness happen? Did soap come with lyrics I didn’t know? Did sadness make for cleaner opera? Why cry about opera at anyone’s front door, especially in the presence of a boy dressed in a canvas of giraffes and elephants?

I spent much of that holiday mulling over soup and soap, sipping some of one and being scrubbed by the other (albeit reluctantly). After New year’s, I put the question to my friend Byrne, asking him just what bothered Mrs. Whitlock and why, soup or soap.

Martinis, he replied, wise beyond his years, and left it at that.

In February I asked the Martinis about their strange effect on others. But they sent me packing (“You little rascal!”) Mrs. Martini said she and Mr. Martini didn’t drink.

But what about soup operas? I insisted.

Which seemed to confirm the existence of a plot hatched by adults to keep giraffe-and-elephant bearers in the dark, a dark that in my case lasted several holiday seasons, until one day by chance someone turned on the Motorola TV in the afternoon, and soup turned to soap forever.