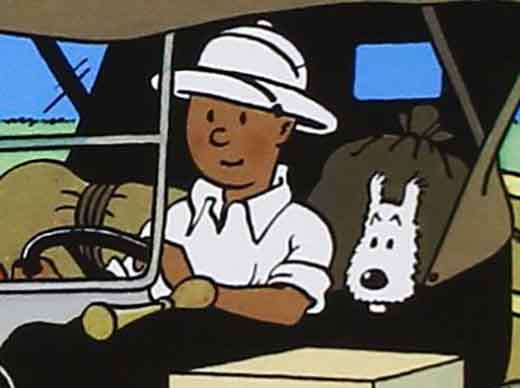 Somehow, 1930s Franco-Belgian cartoon character Tintin drove every kind of car in all circumstances and all went well.
F

or a while now, I’ve been telling people that if I couldn’t afford to live in France, then at least I could die there. Have my ashes scattered from atop the Eiffel Tower.

Be careful what you wish for —because on my last visit to France, I nearly died in a car accident.

The rental agency had given me a tiny Toyota, a beer keg on wheels. Two steps down from the class of car I’d actually reserved, the car had little legroom or headroom. It was nimble enough for city driving, and small enough to park anywhere. But not exactly the car you wanted for long stretches of highway.

Nonetheless, I took it, not wanting to waste time haggling. But I still had it in for the little car. After driving it to Amsterdam and back and touring through Normandy and Brittany, I had made an uneasy peace with this rolling death trap. I was driving along the Route A83 outside of Nantes on a fine late April afternoon, cursing the lack of legroom, eating a pizza and drinking a beer I’d picked up along the way. I stopped at a rest area and threw out the beer and pizza box and kept traveling.

About half an hour later, I noticed my little black moleskine notebook was missing. It was my lifeline full of contact numbers, flight information, and my notes on all my trips for the previous two years. I had to drive another 10 minutes south to the nearest exit before I could turn around and go back to the rest stop where I’d left it behind. This cost me an hour and twenty minutes of precious daylight driving time, so I had to recalculate where I would spend the night. Driving with one hand, consulting destinations on my phone’s GPS with the other, I was not paying attention.

Suddenly, WHAM! My brain and body jolted to reality as the car slammed against a concrete barrier. The steering wheel lurched out of my hands and I blanked out. In that nanosecond, the car swerved all the way into the left lane. I wrestled the car back across two lanes of traffic and onto the shoulder before coming to a screeching halt.

“Fuck,” I said, slamming the wheel. Stupid stupid stupid. At least the airbags hadn’t deployed and the car was still upside up. But the left side of my head had a bump from where it hit the driver’s window, and my shoulder was sore from being jacked against the seatbelt.

Suddenly, WHAM! My brain and body jolted to reality as the car slammed against a concrete barrier. The steering wheel lurched out of my hands and I blanked out.

A big semi swooshed by, blasting its horn. The driver gave me a big grin and thumbs up — whether as a gesture of good luck and brotherhood, or “way to go asshole,” I couldn’t tell.

Shaken, but grateful to be alive, I got out and checked the damage. The front end looked okay. No hood damage. But when I got to the passenger side, my heart sank. The entire side looked like something huge and metallic had side-swiped it, or like a monster had picked it up and slammed against the ground, then scraped it along the pavement for several miles. The doors were compressed, crinkled and knocked off their frames, the paint scraped off. The side mirror was knocked off its pedestal and hanging loosely against the mangled door. The tires were beyond flat, blown out and shredded.

Several cows in a pasture stared at me, solemnly chewing their evening meal of clover and grass. I screamed at the top of my lungs as cars whizzed by. They blinked in bovine indifference.

I got back behind the wheel and turned the key. To my amazement, the engine started. I put the car in gear and limped along the shoulder for several hundred yards until I came upon an orange pole with a blue light. An emergency road service phone! I had no idea such things existed in France.

I picked up the phone, deciphered the instructions and got hold of someone who, alas, spoke no English. In broken French, I gave a broad brush stroke account: Ma voiture! Un accidente! Non, moi seulement. I put the phone back and waited about an hour – long enough to watch the last bits of light leak out of the sky as the sun turned from haystack yellow to blood orange.

As twilight descended, a rugged, tall, broad-shouldered guy with a day’s growth of salt-and-pepper beard showed up in a big Roadside assistance panel van. He was the quintessential, rugged Gallic countryman in reflective coveralls and dark work boots. Between his rudimentary English and my high school French, we managed to communicate and he made a call on his cell phone.

The last whiskers of daylight strayed through the sky by the time the police arrived. Stars were out. Two policemen got out of an SUV, young, dark-haired and ridiculously handsome. They mistook me for German. They asked me if I’d had a beer with lunch, perhaps and got a little tired. I shrugged and said perhaps when I saw they pulled out a mechanism with a tube for me to breathe into. They filled out an accident form and chatted amongst themselves, asked the roadside assistance guy something and then looked at me with big French smiles.

All the while I was thinking that I was about to be hauled off to jail for the night for having that one stupid beer.

But then they gave me a receipt, shook my hand and bid me adieu.

Shortly after they left, a man in a jumpsuit pulled up with a flatbed wrecker and put my car up. Now what? I asked. The driver told me to get in. I gathered all my belongings out of the Toyota and climbed into the wrecker. After a mile or two he pulled off the highway, unlocked a gate and drove through as if entering some magical dimension, some part of the French countryside normally off-limits to American tourists.

We got to his shop in Les Essarts, a Renault dealership called the Garage des Liles. He called the rental car agency, explaining everything to them. Then he handed me the phone. “They want to talk to you,” he said in broken English.

When I put the phone to my ear, a pleasant female voice said the agency would take over from here and I had nothing to worry about. A taxi would come to get me and take me to a nearby hotel, and in the morning, the agency would deliver a new car for me.

This all seemed too simple, and I started fantasizing that I had died out there on the national highway, slipped through some portal and was now accompanied into the afterlife by my guardian angels. Maybe I had actually died in France! It was all so dreamlike, but not without its complications, just as dreams can have their confusing moments, reversals of fortune and thwarted intentions. I came crashing back to reality a month later when I received a $1,600 bill for their services.

The tow-truck driver had to lock up the garage, so I waited out by my wrecked rental car in the gloaming. It was pitch black except for the stars and the glow of the parking lot security lights. I was alone with a bottle of water and my backpack. A dog barked. A car stopped. Someone got out and flashed a light and asked what I was doing. I said I was waiting for a lift.

The author’s little Aygo, in happier times, along the northern coast of Brittany.

Another hour passed before my car arrived. I opened the back door to get in but the driver gestured for me to sit up front with him. Merci, I said. He immediately asked if I was English. American, I replied. Once again, I passed the time in conversation with a man who barely spoke English but somehow we managed and chatted about nothing I can remember as he drove along the dark roads.

The lumpen countryside turned into marshland and shadowy dunes, and although I couldn’t see it, I could smell the ocean. Finally, we arrived at a modern concrete and glass structure called The Admiral’s Hotel in what appeared to be an industrial part of town.

The next morning, I ached in parts of my body that I didn’t know existed. My head hurt. I needed coffee. I called the car agency at 9 a.m. for a status report. They told me a new car would be available by noon, and that a driver would pick me up and take me to it.

Noon passed, and I hadn’t heard from the agency. I called back, and found out a bureaucratic hiccup had delayed things. In limbo, I wandered around the seaside village and took loads of photos of waves breaking against the lighthouse breakwater. I wondered if there was a reason for this this detour from my tour, or if was all part of the unpredictable random chaos that had been my life for so long.

Either way, fate had brought me to a beautiful village by the sea.

By mid-afternoon a young man showed up and drove me all the way back to Nantes to get my car, the car I should have had in the first place – a sturdy, four-door Ford Focus with all the trimmings. I was on my way again, happy to be alive.