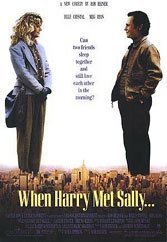 Harry Albright (Billy Crystal) has known Sally Burns (Meg Ryan) for a 20th century forever, which is to say since they went to college together in the Midwest. They’re what the French call copains, buddies. When they see each other, they argue, laugh and swap relationship stories. But with Nora Ephron writing and Rob Reiner directing, it’s evident where it’s all leading. Harry and Sally are people who like spark but say they don’t want fire (Harry: “What I’m saying is — and this is not a come-on in any way, shape or form — is that men and women can’t be friends because the sex part always gets in the way.”)

Well of course it’s a come-on, but the New York storyline (breakups and breakdowns) and two immensely enjoyable actors makes the contrivance a pleasure to watch. Ryan’s Katz Delicatessen orgasm scene is memorable, as much for Crystal’s dead-pan and the look of fellow diners (Reiner’s mother Estelle delivered the clincher: “I’ll have what she’s having…”) Meanwhile, the Gershwin soundtrack (edging into Woody Allen land) gives the heart a good deal of throb.

Sure, Cary Grant’s joyous fronting for Rosalind Russell and Katie Hepburn remains the gold standard for romantic comedy, but that’s no reason not to give Reiner a hug. This a sweet, decent and hopeful film populated by people who speak in full sentences and seem capable of putting neurosis where it belongs, in the back seat.