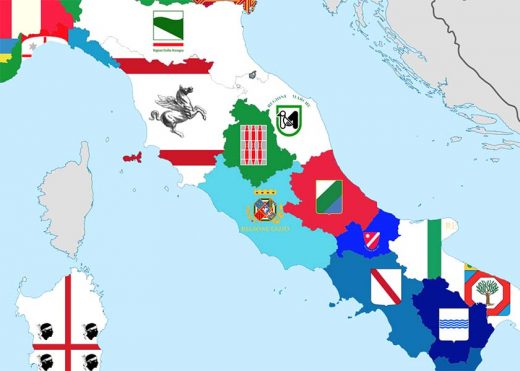 In Italy, regional identity represents citizenship in its own right.
W

hat often struck me when I lived in Italy was the way people identified themselves as from Tuscany, the Veneto or Sicily even though they had never lived there. For the descendants of people who had left those regions for better lives in Milan or Rome, the regional origins of their parents and grandparents remained important to their identities.

Like my Italian friends, most Americans descend from people who sought better lives far from our ancestors’ homes. Yet we Americans usually excise the regional from our identities. Only Californians, New Yorkers and Texans view their regional roots as windows into their personalities in the way Italians do.

Although I lived in Milan for almost 30 years, few of my friends were native Milanese. Most, like me, had come from somewhere else. Call us “upper middle class” or “alta borghesia”, we shared roots in families of professionals, diplomats or academics who prized education, culture and travel. All my friends had studied or worked in cities or countries other than their native ones and their children were doing the same. We shared a belief in certain goods that transcend region and nationality: education, free expression and free enterprise.

Italians use regional origins to explain personal characteristics the way astrology or Freudian psychology devotees do.

In a 2017 essay published in the “Financial Times,” David Goodhart wrote that people like my friends and me, who shed regional identities for borderless ones, belong to one of “two big value clusters.” He calls us the “anywheres.” Anywheres are “educated, mobile people who see the world from “Anywhere” and who value autonomy and fluidity.” Our opposites are the “somewheres,” “generally less well-educated people who see the world from “Somewhere” and prioritize group attachments and security.”

For Goodhart, contrasts between the anywheres and the somehwheres explain everything, from Donald Trump and Brexit to nationalistic Italian politician Matteo Salvini.

I disagree with Goodhart, and not only when he blames anywheres. How does he explain the number of Confederate flags in the Yankee state of New Hampshire where I live? Italian somewheres who hate immigrants follow Salvini and tout a national identity that they would normally reject. Paradoxically, Salvini’s Lega party has a stronghold in southern Italy. Never mind that the Lega was originally a northern separatist party, Lega Nord, built on hatred of southern Italy.

I feel these questions of regional identity strongly at the moment.

I write from Iowa, from a cottage that my great-grandmother built on a bluff overlooking the Mississippi River. My mother said nothing had changed here since she was a little girl. And nothing has changed since then.

I have never stayed in this rickety cottage more than a week. Yet, a train whistle echoing through the valley, the smell of river mud, the whine of a flat-bottomed river-boat crossing a slough or the rumble of barges carrying wheat to New Orleans resonate more deeply than anything from places where I have actually lived.

Someone who is chronically late is, of course, from Naples.

My family’s connection with this place goes back to the 1850s, when my great-great grandfather arrived straight from college in the East. He saw a bright future. The town where he chose to settle was busier than Chicago. Steamboats crowded its shores, unloading passengers and cargo. Thousands of covered wagons arrived from the ferry crossing the Mississippi and rambled west, down the town’s main street. As the town’s first lawyer, my great-great grandfather laid the town’s plats and organized its government.

Barely a decade later, the boom went to bust. The new transcontinental railroad crossed the Mississippi downriver at St. Louis, and took all the traffic and business with it. The town emptied before my great-great grandfather’s disbelieving eyes. He hung on for another decade before surrendering and decamping to a bigger Iowa town, his dreams of glory as a U.S. senator and potential presidential candidate tattered.

His final concession to defeat was sending his daughter — my great grandmother — away to college in Chicago. She had always chafed against the small-town’s strictures and swore never to return. But in the 1930s, the town’s beauty and her memory pulled her back. She bought land on a bluff overlooking the river and built this cottage. It still has the curtains she hung eighty years ago.

We only come here once a year. It is falling apart and visits are filled with work. In about three days we have done everything and seen everyone in the town (there is only one other original family left). I quickly have my fill of the awe inspiring landscape. Nostalgia soon sours from pleasure to melancholy to soul sickness.

We should get rid of the place, we tell ourselves. It has the best site on the hill and several people have made standing offers to buy it. But we cannot bring ourselves to sell.

I guess there’s more “somewhere” in me than I realize.