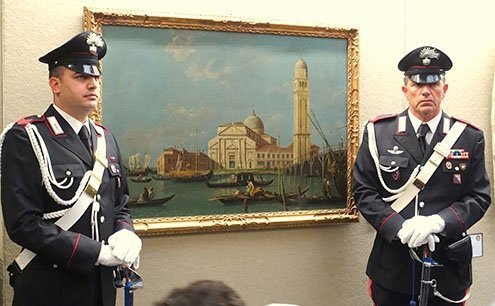 Carabinieri at the ready beside a recovered 18th-century Canaletto.
I

had a front row seat for the recovered artifacts display show at the Museum of the Carabinieri in Rome in June. I was impressed with those brightly uniformed, even tough-looking Carabinieri (Italian paramilitary police) — with their signature white shoulder belts and hands on their swords — standing in “ready” position next to a framed painting attributed to the 18th-century Venetian artist known as Canaletto. The message: these are the cops who have brought Italy’s cultural heritage home, often from the United States, as in the infamous Getty and Metropolitan Museum cases in which trafficked art was wrested from those museums.

But the facts behind the show and its message are more complex. Yes, Italy has a crack art fraud investigative unit — The High Command for Protection of Cultural Patrimony (Comando per la Tutela del Patrimonio Culturale, or TPC), a division of the Carabinieri. Yes, their work has seen more than 100,000 objects valued at half a billion dollars seized in one year alone. Yes, the U.S. Department of Homeland Security assists in these efforts. “There is constant cooperation … on many levels,” says Daniel Berger, an American with the title of consigliere, or advisor, to the Italian Cultural Ministry.

The more telling question, however, is whether the U.S. should be as cooperative as it appears to be in helping Italy with the recovery of these artifacts. The matter came up before the renewal earlier this year of a Memorandum of Understanding (MoU) between Italy and the U.S., a document that imposes import restrictions on ancient artifacts.

Italy continues to be rightly criticized in the art world for its inability to take proper care of its patrimony. A recent government cash infusion after nearly a decade of budget slashes addressed some of the concerns. Yet Italy still seems unable to prevent widespread looting of archeological sites. Nor has it been able to deter tourists from chipping away at the Coliseum or kept soccer vandals from damaging Pietro Bernini’s Old Boat Fountain at the foot of the Spanish Steps. Italy’s museum system is in dire need of reform. Museum visiting hours remain limited and art works are poorly rotated.

What will happen to the Greek krater repatriated from the Minneapolis Institute of Arts and shown in the Carabinieri exhibition? There’s a good case to be made that the arts might be better served were objects on display in Minneapolis, even if stolen, rather than stuck in storage for long stretches in Rome.

The Association of Art Museum Directors (AAMD) had asked the U.S. not to extend the 2011 MoU without changes. It noted that cutbacks left many of Italy’s treasures desperately exposed to looting. The AAMD also claimed that the U.S. risked harming the general interest of the international community by agreeing to import restrictions. Unless Italy could rigorously and consistently enforce export checks, works might end up in other countries, often in private hands.

The U.S. and Italy have acknowledged some of this. Reports from the TPC suggest looting remains a “severe problem,” while the sheer amount of Italian material on the market indicates that the country’s archaeological heritage “is being pillaged to meet the demand in the international trade.”

The central article of the MoU was rewritten in 2016 to address some concerns, but the language remains precatory — lawyerese for “weasel words.” For example: “[Italy] shall endeavor to use the opportunity of exhibitions of returned objects to educate the Italian and the international public about the damage caused by archaeological site looting and the loss of knowledge wrought from such looting.” The Carabinieri exhibition of fewer than a dozen artifacts, while fascinating, hardly fulfilled this obligation.

Berger has a more sanguine view: “All told, the MoU is a success story and evidently has approval on both sides, evidenced by its being renewed twice.” He also emphasizes that Italy has taken steps to increase the exchange of objects via loans to major global museums.

The MoU’s dependence on precatory language remains disturbing. Statements such as Italy “agrees to continue” its work in supporting archaeological work are fine — so long as one has the budget to do so. Elsewhere, the document says Italy will “create and pursue innovative and effective ways to detect and stop the looting of archaeological sites.” Vagueness is the rule.

I would ask an underlying question, more ethical than legal: Do recovered works belong to Italy in the first place? Many artifacts were returned to Italy because the Romans had taken them as plunder from societies they defeated. As one of our Italian friends said, “Well, those were the rules then.” Yes, we have better “rules” today, dating to Italy’s 1909 Antiquities Law and to the UNESCO 1970 Convention on illegal transport of cultural patrimony (from which the MoU stems). Italy is proud of whatever is found on its soil or in its seas and of its enormous cultural treasure trove. But its inability to prevent looting and to maintain and even exhibit a reasonable portion of its holdings means the time may have come to rethink some of our modern “rules.”

— American lawyer Dianne Bennett is co-author with William Graebner of two alternative guidebooks to Rome, including “Modern Rome: 4 Great Walks for the Curious Traveler”, as well as a blog Don Carroll returns in September.