When a Bra Was a Bra 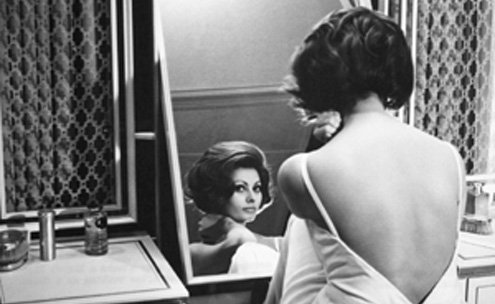 he women who run Treppiedi, a tiny shop in the center of Rome, have over the years made custom lingerie for the world’s most glamorous women. Sophia Loren, Marlene Dietrich, Anita Ekberg for her role in “La Dolce Vita” and Elizabeth Taylor in “Cleopatra,” to name a few.

I’m neither glamorous nor famous, but on assignment to check out the custom-made trade, I landed on Treppiedi’s doorstep — a little afraid to enter.

I’m not much of a lingerie shopper. The discounted cotton briefs on Victoria’s Secret tables serve me just fine. There’s also the language issue. I speak Italian well enough, but it’s moments like these that you realize how limited your vocabulary really is.

As I stood there checking out the bustiers and negligees in the shop window, I struggled to think of the word for brassiere, the item I had decided to have custom-made. In fact, I couldn’t think of any boob-related words. For example, how to explain I wanted cleavage?

Spotted by the shopkeepers, I went inside. There were no other customers. Just two serious-looking women behind the counter who in seconds sized me up as one, a tourist, and two, a size C in a size B Warner cup.

Treppiedi has changed a lot over the years. Back in the 1970s, it was in a more fashionable square in Rome, Piazza San Lorenzo in Lucina, in a building that now houses Louis Vuitton. It was a grand old salon filled with pictures of the famous women who shopped there. In 1989, founder Marcella Trepiedi retired and le ragazze, the four “girls” now in middle age who had worked there since their youth, added a “P” to the store’s name and moved to more affordable quarters on Via del Teatro Valle near Corso Vittorio, in an area known for its artisans.

If you weren’t looking for the shop, you would walk right past it. It’s small, and something about the bright lighting, all those fussy little boxes on the shelves, and even the manikins in the window make it look dated. But some things never change, and the service offered is still remarkable.

The artisans at this bustaia are among a dwindling tribe of corset-makers who still make brassieres, corsets, bustiers and even bathing suits to order. While luxury as a category cheapens each year — with designers pandering to everyone with products that scream rich, but are mass-produced in China — the luxury of having something that’s one of a kind and made especially for you never goes out of style.

I didn’t have an appointment and, as it turns out, didn’t need one. The language wasn’t a problem. I kept it simple. I explained that I had a slender back for my bra size, and had trouble finding ones that fit.

Rosanna Di Napoli, who has worked at this business since age 16, actually required a fair amount of convincing that I needed a custom-made bra. In addition to making items from scratch, they alter already-made bras and also off-the-shelf bathing suits to make them fit better. She said this option would cost me less and work out just fine. The expense of having a bra custom made, when it wasn’t for a wedding or some special anniversary, wasn’t necessary. She pulled out bras from boxes on the shelves to explain what she meant. In the end, I opted for one of each — a custom-made bra and a refit. The decision made, the custom-making process began.

First, though, a few caveats for the would-be buyer. Number one: these women speak only Italian. Although they have customers from England, Germany and even the Middle East — and insist that women, no matter what language they speak understand each other perfectly when it comes to lingerie — it’s best to take along a translator if you don’t speak Italian.

Second warning, and perhaps this goes without saying: you can’t be in a hurry. Discussing your body and its short-comings, your views on lingerie, your lover’s views, your time in Rome, and also hearing their stories, is all part of the process. If these women offer you something to drink, you should accept. “Sophia Loren was so down to earth,” says Catarina Severini who started with Treppiedi as an assistant seamstress at age 12. “She sat like everyone else and had a coffee with us.”

This experience is not for the timid. Here’s what happened next. After we decided on a few general styles and shapes I liked, I went into the fitting room and tried on already made bras to give them an idea of my shape, and what I would prefer it to be like. In those tiny quarters, I spent the next 45 minutes or so, trying on off-the-shelf bras and being measured, while Ms. Di Napoli altered the straps, stuck pins in the fabric, added padding, and helped prod me into shape.

Delighted to be finished with that task, I returned to the center of the store to pick fabrics and colors. This process required more discussion. For what occasions would I be wearing them? With what style outfits? Coffee was offered. Finally, everything decided and with other customers milling about, I left my phone number, a deposit, and said goodbye. Although they said it could be three weeks before I heard from them again, less than a week later they called to say they were ready for my fitting.

On a clear autumn day, I returned to Treppiedi. This time I wasn’t alone. Lord and Lady Glentoran were in the store. They were over from London, enjoying a weekend of custom-made shopping. Earlier in the day, they had been at My Cup of Tea, a studio near the Spanish Steps that features custom designers and their clothes, shoes and jewelry. Lady Glentoran, who says she has a “black belt in shopping” was having a shirt with custom-made cufflinks created at the studio, and also a satin skirt and a kimono. She’s been buying custom-made items for years, including dresses, shirts, skirts, trousers and jewelry. The items fit and she says, “At least I don’t walk down the street and see a dozen women wearing the same thing.”

Unlike most husbands, Lord Glentoran, a conservative member of the House of Lords, plays an active role on these excursions. (My own husband took off at the mere mention of undergarments.) That morning at the My Cup of Tea studio, Lord Glentoran had asked if anyone there knew someone who made lingerie. “I’ve always been frustrated at my wife’s inability to find suitable undergarments that do justice to the clothes we’re buying,” he says. They were told about Treppiedi and went straight over.

I helped with the translating, and when they left, took my turn in the fitting room. I tried on the altered bra first. Ms. Di Napoli simply adjusted the straps and we agreed that the refit was a perfect fit. You couldn’t even tell it had been remade. I tried the custom-made bra next. Still a work in progress, she added another pin to smooth out a seam, tightened the back and made a note to add another set of clasps. I would have to come back, meaning a third trip to Rome.

Not long after, I made my final visit to Treppiedi. The custom-made bra fit perfectly. I was delighted. This bra I would save for special occasions, such as events I planned to attend with cleavage. “It’s like surgery with silicon,” quips Ms. Di Napoli. “But you save €2,000.”

Even still, it wasn’t cheap. The bill: €90 for the refit bra, and €200 for the custom-made one — four times what I might pay in the U.S. for a bra off the rack. (More complicated bras and corsets can cost a lot more.) The price tag didn’t include three trips to Rome, hotels and meals. No matter. That night I wore a low-cut wrap dress over my new brassiere to dine al fresco at an elegant restaurant in Rome. On the way out, my husband noticed that a table of Italian men stopped eating, smoking and talking on their cell phones to watch me pass by. That’s worth any price.