What’s in a name? 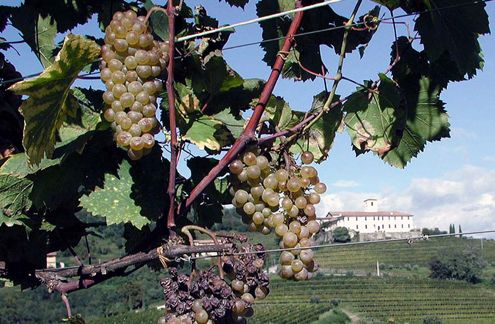 I’ve always loved tocai, the medium-bodied, aromatic, dry white wine produced in Friuli-Venezia Giulia in sub-alpine northeast, Italy’s third most important wine producing region after Piedmont and Tuscany. Stretching almost from Venice to Vienna, the area — little-known to Americans — has been a wine growing region since Roman times. By the end of the 19th century, more than 150 varieties of grapes were cultivated there.

With a growing zone that benefits from both alpine and Adriatic air currents, the region is internationally recognized for its fragrant and elegant whites. The tocai grape, also known as Sauvignonasse, is the most widely planted. Eight million bottles of tocai are produced annually, a testament to how many people approve of its floral aroma and rich flinty mineral taste. Recently, though, the crisp wine has fallen afoul of the European Union.

In 2005, as part of an agreement governing Hungary’s EU entry, the European Court of Justice in Luxembourg ruled that the name tocai was too similar to the Hungarian wine tokaj. Tokaj is a honey-colored sweet or semi-sweet dessert wine made using Furmint and Haréslvelü.

Though the two grapes are entirely different, the court ruled that the Italian tocai “does not qualify as a geographical indication” because “it has no special quality, reputation or characteristic that is attributable to its geographic origin.”

Tell that to the folks in the area (and this romantic wine writer). The ruling has placed Fruili producers at the mercy of a confusing tangle of regional laws, ministerial decrees, and both regional and EU documentation. No new name has emerged to replace tocai and local growers don’t know what to write on this year’s etichetta. Meanwhile, regional chambers of commerce (who must register the 2008 vintage) are exasperated. “It would almost be comical if it was not so serious from so many points of view,” said a representative of the Friuli-Venezia Giulia branch of Federdoc, an association of quality wine producers.

At the heart of the tocai controversy is the wine’s name and sentimental origins. Producers trace the grape to 1632, when Countess Aurora Formentini, engaged to a Hungarian count, included 300 tocai vines in her dowry. While its first recorded mention is of noble origin, the grape’s bounty met with immense success among simple folk.

Tocai’s name comes from the word tajut, which in local dialect means a juice-sized glass, the kind tocai was traditionally poured in. Friuli wine growers drank the wine at local fransche, a precursor to the neighborhood osteria. These locales were marked with tree branch signs that hung over the gate or doorway. Frasche were informal gathering places where farmers and their families enjoyed simple yet hearty home-cooked meals after a hard day’s work harvesting. They ate patate in tecia, boiled potatoes in salt water, or frico, a kind of cheese fritter, and washed them down with tocai. When the harvest ended, the makeshift frasche closed until the start of the next growing season.

The tree branch tradition has since been adopted by more permanent eateries and agriturismi throughout Friuli-Venezia Giulia. If you look hard, however, you can still find a scattering of the original seasonal frasche. Of course they serve tocai, Friuli’s signature contribution to the world of white wine.

Whatever name tocai eventually goes by, it will remain a favorite of mine. My advice? Buy a bottle now, before the fall of Western civilization, for old times sake.

2001 Scarbolo Tocai Friulano, Grave DOC: Rich and lingering, this represents one of the best values in Friuli. Almost viscous, with a flinty, mineral finish that lingers, I love its white flower and lemon scent. Made just south of Udine, it’s among the richest tocai’s you’re likely to find, and comes at a reasonable price.