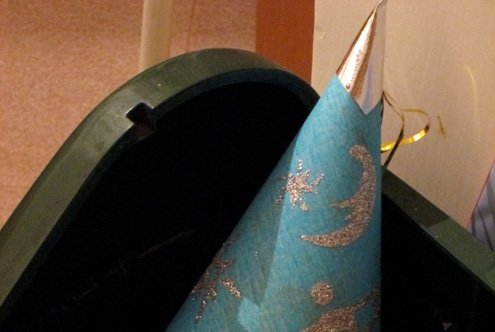 Party hats can be a one-off when relationships snap.
N

ot so long ago I ended a brief relationship with a woman more than half my age. She was Croatian, from the Adriatic seacoast, and we first “met” on a website, with spirited chitchat eventually leading to several weekends together.

The age difference matters because the prying court of public opinion resents such gaps. Older men are traditionally tied to younger woman under a scarlet hood of sexual scorn. They are seen to wield power and money to which some young women flock if beckoned. Many are pigeonholed as predators in search of physical and emotional refueling before mortality’s singsong settles in. Their impulsive antics can end otherwise durable marriages.

But I’d be a hapless predator. I am unmarried, childless, and live alone as an American expatriate in Rome. For whatever reason I was never drawn to primal conquest. I liked Eva. She was at home in both English and Italian. She was cheerful, smart and sincere, a youthful — if not sometimes childish — combination. Not all youth is so carefree. I’ve known old souls of 26, myself included.

That we were cultural opposites seemed oddly promising. Though she’d never been to the United States, she had more in common with emoticon-powered North American culture than I did, whether the subject was celebrity culture, TED lecture superstars, or online protocol (“How can you not have WhatsApp!”) Her English teachers were the fictional Carrie Bradshaw, the very real Taylor Swift (another child of 1989), and the “House of Cards” incarnation of Kevin Spacey. Whenever she agreed to anything, her combustive response was, “deal!” She loved the fact that my Warsaw-born mother had once been a princess.

While I grew up as a mid-20th century only child who reveled in his Washington, D.C. solitude, she was reared in Croatia’s 1990s war years by middle class Catholic parents — a housewife mother and a religiously devout doctor father — who demanded years of piano lessons. After that, a mobile phone became her soul mate, a generational necessity for the post-1989 crowd. At 18, she had Chinese ideograms tattooed one atop the other on her upper back, “a stupid thing” she now regretted. She called her mother “tiger mom,” had a twin sister, and two younger brothers, one a boxer, the other a math whiz. Her too-conventional family pushed her to seek a more eccentric identity. She came to revere chic rule-breakers (Serge Gainsbourg, of “Je t’aime… moi non plus” fame), amassed and posed in an array of stylish and provocative clothes, shifted hair color whimsically, and eventually became addicted to the unapologetic narcissism of selfies, each of which she meticulously graded.

Last fall, on her first visit to Rome, I quipped that she probably took more pictures of herself in a day than I’d had taken in a lifetime. She smugly agreed, explaining them as a necessary part of her “aesthetic” as well as an act of rebellion against the banality and vulgarity around her. She rarely smiled in these photos, unhappy with her “tiny” teeth, and also with her snub nose, which I found exotic but she did not. Working to get the light right was a constant concern. With a nose job, “I’d be perfect,” she told me. Who was perfect, or close, I asked her? Charlotte Rampling, in her 1970s “Night Porter” prime, Eva Greene, and Olivia Wilde, but only from the top up (“…ignore the legs.”) Her closest friend was a gay fashion designer who had left the suffocating Croatian social and sexual scene to study art in London. She visited him often.

But a hardnosed side flanked this chatter. When I praised her cheerfulness, she shot back, “I can also be manipulative,” five words spoken deadpan candor while munching on an unripe apple in my kitchen. “I have never been hurt,” she said on another occasion. “I will not let it happen.” Had there been other older men in her life? “Yes, but I am not an escort. I don’t care what men think of me.” Did her mother know about out relationship? “No. I lie to her. It is better that way, better for her” (perhaps true).

That her pregnant sister intended to name her daughter Aurora stirred contempt, since for whatever reason she found the name “hilariously stupid.” She was dumbfounded by her boxer brother, “he cares about people,” a sensitivity that to her contradicted his craft. Time and again, she preached the doctrine of “chill,” as if sticking to aloofness might immunize her against criticism or condescension.

I ignored these brambles.

Ours was a generational high wire act, and a challenging one. Her Smartphone was a constant companion, even on New Year’s Eve, when asking the hotel restaurant wait staff for Wi-Fi coordinates seemed entirely natural to her, crass to me. At times, my preference for conversation got in the way of the phone-driven distractions she’d come to see as essential. So it was that a middle-aged man found it difficult to compete with the digital compass his thoroughly 21st-century partner depended on for emotional, intellectual and photographic sustenance.

Constant handholding aside, our romance was heavy on adrenalin and low on logic. She once compared us to the odd couple duo of Jean Reno and Natalie Portman in the 1994 Luc Besson movie “Léon: The Professional,” a film that ends badly. “He’s not my father, he’s my lover,” sasses the teenaged Portman in the film’s best verbal graffiti. But the sass doesn’t last.

Not surprisingly, competing visions of honesty, respect and entitlement would eventually divide us. Before a New Year’s Eve dinner at a five-star hotel restaurant I’d booked at her request (“Tell them you’re bringing your fiancée…”), she sought luxurious clothing to suit her “hot girlfriend” status, a first-ever request that froze me in my pauper’s haunches. If I do this, I told her, things change: you do not walk away, you do not waver. Though middle-aged men can be punch drunk, I was not.

What a “strange and wonderful” man I was, she replied with text message swiftness. Of course she’d never walk away; 2016 would be our year, we would travel together, and she sealed the promise with a kiss.

When she left my Rome home after her third visit in two months, I basked in the irrational but confident conviction that my improbable friend and lover was someone who for whatever reason seemed to care a great deal for her awkward elder companion, paradoxically making our intimacy both plausible and fragile.

My parting request, part of the larger pledge, was to ask that she stay in touch, which modern technology makes easy. But she did not, beginning a silence that two weeks later unraveled into a Skype announcement that while she liked me “a lot” she was not in fact attracted to me — “I did not expect it to pass so fast…” — and that short of friendship, what had been had been and was no longer. Less than 15 days after trips to Valentino, Max Mara and New Year’s Eve fireworks the pulsing emoticon in the shape of a kiss suffered a massive heart attack.

“I should have known better with a girl like you,” starts a memorable 1960s Beatles song. My friend would probably opt for Taylor Swift, who sings, “You look like my next mistake,” before moving on to yet another. But it’s worth remembering that romantic misadventures exist outside time, gender and age.

In fact, what may be more interesting than my weakness and her opportunism, both of which are common enough, is the emotional metabolism of the gap between us.

I belong to a Boy Scout generation that sees pledges between caring people as a bond or an oath, with gifts an exclamation point. She belongs to a separate one for which a promise is opportunistic means to acquire material fruit that might otherwise be denied. Sharing pictures of glittering gifts produces envy that makes the how of their obtaining beyond reproach, if not irrelevant. The “don’t walk away” pledge I saluted she saw as “in the moment” means to much-desired ends, part of a misdemeanor-filled digital logic that pushes the successfully acquired up against the deserved. It’s an old con lubricated by near-instant fulfillment, and equipped with “I’m sorry” button if anything goes wrong.

My kind sees her kind as venal. Her kind sees my kind as unbearably naïve. There is no shelter from that storm.

At a political level, the gulf between us also helps explain why concepts of fair play and conflict of interest fail to make lasting inroads in states where personal cleverness and financial rewards come ahead of the civics and principles of restraint.

Italy, Greece, the Balkans and Russia remain crippled by ethical dyslexia. They resist embracing integrity in the same way gangsters and their molls resist being made to distinguish between the expensive and the stylish. Wardrobe aside, carpetbaggers would laugh at the “Roman Holiday” version of Audrey Hepburn. What princess puts pledges ahead of self-gratification?

Since the end of the affair I’ve been haunted by my lapses. I ran a dozen red lights. “Take a look at men,” wrote Argentine journalist and novelist Roberto Arlt in 1929, “Probably they have wives, children, houses. Perhaps they’re all losers. But if anyone tries to break into their home, to steal a cent from them, or lays a finger on their wife, they turn into wild animals.” True. Betrayed or infatuated men are the mulish total of their wildness, whether what emerges is relief, rage, resolution or remorse, or a chemical amalgam. Testosterone is anything but user friendly.

I no longer speak to Eva. I chose not to pursue a friendship. Our impact left a scar that “please forgive me” could not repair. She will soon push into her 30s and with luck earn a degree in marketing that may help her get the fashion industry job she so craves.

My first language was French and I still remember a remark Parisians once applied to contemptible acts: “Ça ne se fait pas,” literally “It’s not done.” But between literal lines is, “How could you?” and it usually comes after the damage is done.

Strangers in the night are very much like ships in the night. The glitter is arousing. Mesmerized, you run below deck in search of the Ark of the Covenant, which you know must be down there. Until you see the snakes.