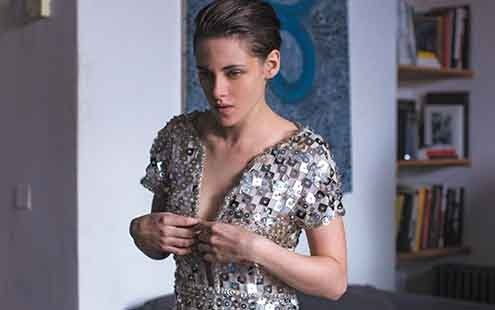 portrait of millennial angst, “Personal Shopper” is the second film to feature the tag-team of French indie director Olivier Assayas and A-list actress Kristen Stewart, and the second — after “Clouds of Sils Maria” (2014) — with Stewart in the role of personal assistant to a difficult, self-involved woman. The film earned Assayas a share of best director honors at the 2016 Cannes festival.

The personal shopper of the title is Maureen Cartwright (Stewart), whose job is to scooter around Paris selecting fashionable and expensive outfits for her arrogant, celebrity employer, Kyra (Nora von Waldstätten). Though she finds her work boring, she’s good at it, able to select five outfits and three purses in a matter of seconds. Unlike Kyra, and despite her striking good looks, Maureen is an unassuming tomboy, apparently satisfied with an appearance that includes sneakers, unwashed hair, and, day after day, the same sweater. She tolerates her irritating boss, chafing only at one rule: that she not try on Kyra’s garments.

That she wants to don Kyra’s spangled dresses signals a major theme in the film: identity. Despite her shopping skills and self-confidence, Maureen desires different work, though she seems incapable of imagining what that might be, and unable go after it.

She flirts with changing her physical appearance by secretly breaking the rules, donning Kyra’s clothes, some of which border on S&M. And she explores a new, mildly deviant sexuality (her boyfriend is a sexless techno nerd). Maureen confesses she wants to be someone else, even if her efforts in that direction are halting if not trivial. Indeed, Maureen does not so much attempt to construct a new identity as she does muse about the possibilities of doing so. Most film narratives would focus on Maureen finding a more exciting mate, but “Personal Shopper” has no man worth caring about. The couple will not be made. In the tradition of the horror film, Maureen is frighteningly alone.

What does it take to bring zest to this bored beauty’s life? Ghosts and a stalker. Apparently, the ghosts are real. One of them, seen, resembles a Degas dancer; another, invisible, drops drinking glasses from mid-air. Maureen watches a longish video of a Victor Hugo séance. Life is interesting!

It becomes even more interesting when an unidentified person enters the story, but only through text messages to Maureen, further distancing her from human contact. (The telephone once played this role, most notably in 1948’s “Sorry, Wrong Number.”) The texter knows details of Maureen’s personal life. Who’s the sender? There are clues, but Maureen herself is clueless, imagining that this ghost-like communicator might be her dead twin brother communicating from the grave — a gene for psychic “medium” runs in the family. A real murder interrupts this fantasy, and Maureen must deal with a dangerous stalker. Scarier still! I might be murdered, therefore I am?

The film may lack intellectual coherence as an interrogation of the concept of identity, but that doesn’t mean it can’t be enjoyed, viscerally. For those who believe in ghosts, or can muster a dose of old-fashioned “willing suspension of disbelief,” “Personal Shopper” can be appreciated as a curious sort of mystery-thriller built around Stewart’s low-affect but still magnetic and nuanced performance. Although surrounded by stock characters, among them the insufferable, unctuous guy in the garden, she holds the production together with subtle modulation of emotion and expression. Hold the analysis. Sit back and … be tense.