What you can and cannot see 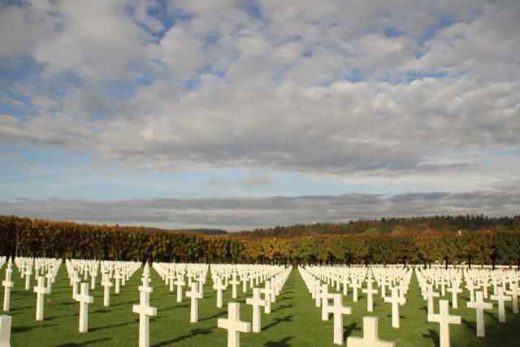 he highlight of my 2018 was a trip to France to commemorate the centenary of the World War I Armistice, signed on Nov. 11, 1918.

I was in a group with 13 other descendants of U.S. Marine veterans who fought in that war.

Our guide was Gilles Lagin, Honorary Marine, all around mensch and encyclopedia of everything “Devil Dog” (as the World War I Marines became known). Gilles, who grew up near Belleau Wood, site of the June 1918 battle that made Marine legend, has made a name for himself escorting Americans through the battlefields where their ancestors fought. (French TV recently dedicated a documentary to his efforts).

The trip and my friendship with Gilles grew out of my own research into the life and times of my grandfather’s brother, Lothar R. Long, who was an intelligence officer in the Marines’ 6th Machine Gun Battalion. Several years before, I had retraced Lothar’s war with Gilles, who also helped me uncover the sad story of Lothar’s 1920 suicide in France.

Everyone in our group still bears the traces of the time our ancestors, who all survived combat, spent on the battlefields of France. Some were third-generation Marines, carrying on a tradition that began in 1917. For others, like me, the trip was a voyage of discovery into a mysterious, but critical parentheses in our families’ lives.

Within the group, hidden bonds from the past helped to forge immediate friendships. At every stop, we shared unspoken thoughts as each of us interrogated the landscape for clues into what our ancestors had seen or felt.

The military men shared insights into artillery or logistics from the Gulf War and Vietnam. After years of reading about these battlefields, this was their chance to evaluate the terrain with their own eyes.

I finally cried. I cried both for what I had seen that day, and for everything I had not.

Gilles repeatedly reminded us that everything we saw — the command posts, the trench-lines, offense and defense — were not inanimate dots on a map. They were the sum of individuals who had names and faces, some of whom we knew.

The camaraderie within the group was magical. Over seven days, we shared French food, history, humor and hikes through muddy fields and underbrush-filled trenches.

Just as magical was the hospitality offered by the still-grateful French. A farmer showed us a quarry on his land where Marines had sought shelter from artillery fire. When the rain arrived, he invited us to eat our picnic food — and try homemade pâté — in his huge, warm kitchen. A local historical society let us lunch in a schoolroom housing an exhibit about the American liberation of the town from German occupation 100 years ago.

The land and monuments also cast spells. In Belleau Wood, we saw the tangle of brush and rocks that made the hand-to-hand fighting so brutally intimate. From the monument on Blanc Mont Ridge, we saw the vista of deadly ridges, each one a threatening military objective. Today the water of the Meuse River flows placidly. A century ago it coursed with the futile blood of Marines who crossed only hours before the Armistice.

These battlefield regions of France exert a melancholy magnetism, which can be at once strangely comforting and fearsome. We felt its pull the evening we visited the American Battle Monuments Commission Cemetery at Oise-Aisne. Superintendent Hubert Caloud explained it was a place of peace and pride, not sadness. His “boys” fought nobly and were now safe in the earth forever.

This tumultuous terrain often leaves me feeling numb, perhaps because you steel yourself against pain. Or perhaps the struggle to reconcile what you can see with what you cannot drains emotional energy. A picture post-card French landscape of happy cows and haystacks surrounds you. It takes effort to imagine the now-invisible carnage of the war or the poison that still lurks in the earth below; tons of unexploded munitions and chemical residue that continues to maim and kill.

Occasionally, something fuses seen and unseen. And when it does, it shocks with the high voltage of a suddenly-completed emotional circuit. It happens when you least expect, as it did when I visited Auschwitz and was unmoved by the piles of hair and eyeglasses but snapped in two by abandoned railroad tracks we saw outside the camp on our way home.

On the last day of our French trip we visited the Marines’ Meuse crossing point and the house where my great-uncle killed himself. We ended the day at the American Meuse-Argonne cemetery where there are 14,246 white crosses. My numbness persisted.

At the cemetery, one of our group, John Cleaveland, asked us to visit the grave of Army soldier Freddie Stowers. We were happy to comply with what seemed a nice enough gesture. At the grave, John began reading a simple text about Stowers written by historian Brian De Toy. It told of Stowers’ service in a segregated African-American unit and his fatal act of heroism that went unrecognized until 1991. As John read, dusk rushed into the cemetery carrying with it the burden of the day’s events. It was then that I finally cried. I cried both for what I had seen that day, and for everything I had not.