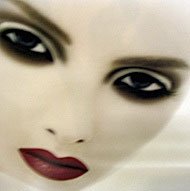 “When I go out with my girlfriends,” she says, “I slyly mention that there are some guys tagging along. Of course it’s not true. But what does he know?”
I

t dawned on me the other day that women have it hard. Especially when it comes to relationships. According to Fabio’s mother, there’s a laundry list of things a women must do to keep a man on his toes or run the risk of having him look at another woman or, worse still, leave you. Fabio’s mom and sister were having the “man” debate the other day at home. No one in particular, mind you. Fabio’s mom offered some rules of thumb she thought all women could learn from. “In generale,” she said, though I couldn’t help but wonder if in generale really meant me. But I listened.

A woman should always try to look her best. That, she says, is because there’s always a woman out there ready to steal your man. But if you always make yourself look attractive, you’ll keep your man interested. This means also fixing yourself up when you go to the supermarket. Yes, the supermarket.

— Give a man some breathing room.

A woman needs to let her man be libero. If he wants to go out with his friends one night for beer or to play calcietto, let him. “There’s nothing worse than a controlling, over-possessive woman that tries to keep her man under lock and key,” she said. The more a man thinks he has freedom, she said, the less he’ll want to rebel. “Besides, it’s good for a man and a woman to have their space every now and then. They’ll have more dialogue. And believe it or not, the more independent a woman is the more attractive she becomes to a man.”

For that reason, a man and a woman should always have their own friends.

Still, I couldn’t help wondering if men sat around having the same conversation. If so, what were their secrets to keeping women on their toes? My suspicion was there weren’t any. I could hardly picture Fabio saying to his friend Domenico, “I keep Nicole on her toes by watching calcio all day on Sunday.”

Fabio’s sister uses her own tactics for keeping her boyfriend in check. “When I go out with my girlfriends,” she says, “I slyly mention that there are some guys tagging along. Of course it’s not true. But what does he know?” The “little white lie,” she explains, “makes him just a little bit jealous and then he wants me more. And everyone’s happy.”

I decided I’d try her tactic on Fabio. He was in Calabria for work when I got him on his cell.

“Ciao Amore. Yeah, I’m out and about with amici.”

Notice, I said amici and not amiche. I left it very vague. Smart move on my part.

But that’s when my smarts ran out.

“Um, amore,” he answered after a moment, “did you forget you’re calling me from home?”