What men do in bed 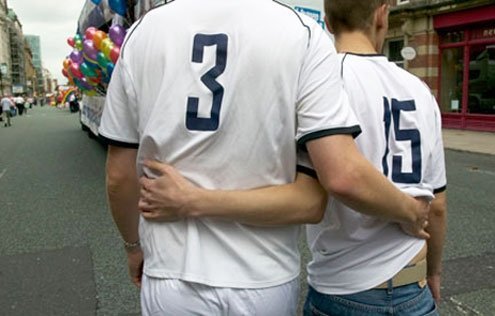 Love the one you're with.
I

s it my imagination, or is there an abundance of self-proclaimed holy messengers (most indignant) preaching about what happens when a man lieth with another man? How so many strangers to gay life are so profoundly informed on the topic I don’t know. Yes, there’s Google, which doesn’t exactly respect privacy. But online can be like the movies: It’s not always real.

Ironically, gay people have always had access to information about just what happens when a man lieth with a woman. Many gay men have slept with women, sometimes with a lot of woman. It’s also impossible for anyone, regardless of gender, to get through a city day without being assaulted by billboards, commercials, magazines and videos that display heterosexuals (perfectly groomed and never-sweating) in an endless array of sexually themed positions.

So, in the interest of the free flow of information, and personal candor, I’ve decided to describe what my partner Alberto and I do in bed (and elsewhere). Call it the inside story.

To start with, we do it a lot, whenever and wherever we can, mostly in bed, but sometimes at home on the couch in front of the TV, certainly while on vacation, and even at work if we can find a way to avoid discovery. And if sleeping were an Olympic sport, Alberto and I would be on the on the Italian national team.

According to the universal law that opposites attract, “fluffers” — the messy — and “tuckers” — the neat — usually end up in bed together. I’m fluffer while Alberto is a tucker. My feet and legs must hang from covers in order to breath. In the morning, my side of the bed looks like a gorilla cage. Alberto, on the other hand, sleeps like Dracula. When he rises, his side is as wrinkle free as Sofia Loren after a facelift.

As with any couple, basic bedroom etiquette is essential. Farting under the covers is strictly forbidden. This is for obvious reasons; it smells bad and can lead to loud complaints as well as uncontrolled laughter. Neither is conducive to sleep.

Alberto and I like “spooning.” He lies on his side with his knees slightly drawn in, and I move in closer. We’re two spoons in a drawer. When the outside world is a hash, I feel safe and warm curled up with my backside against Alberto’s belly and his arms wrapped around me.

Italians are reputed to have substantial noses and Alberto is no exception. When spooning, no matter how careful I am to tuck the covers in around me, Alberto’s nose is pressed against the back of my neck. In the winter, he blows cold air, in the summer it’s hot; in both cases I feel it on my neck and under the sheets. In winter, Alberto suffers from a sad condition known as “dead man’s toes.” I have to be constantly vigilant to avoid his worming icy feet towards me in search of a place to thaw out.

If you’ve ever seen a fish flip-flopping at the bottom of a boat, you know what “fish fingers” are. Fish fingers incidents usually occur just as I’m drifting off to sleep. Alberto’s hand, which is resting on my head, flopped across my stomach, or wedged between my legs, suddenly starts flapping like a fish gasping for air. It lasts only a few seconds. But just as I’m sure I can go back to sleep, the fish returns to flapping.

As for me, I’m a tooth grinder. I can sound like a beaver gnawing on a large pine tree. I don’t snore much but I do exhale with the ferocity of a surfacing whale.

At times I have nightmares and I cry out in my sleep. I can also wake suddenly in tears. That’s when Alberto holds me, tells me it was just a bad dream, and rubs my back until I fall asleep again.

When Alberto has his once-a-week hospital night shift and I have the bed all to myself. There are no dead man’s toes, no fish fingers, no farts, no snores and no north wind on my back. And I have trouble getting to sleep. I wake often and reach over to his empty side of the bed.

Humans spend a large part of their lives in bed, often asleep. We publicly scrutinize who’s in bed with whom ad nauseum. Let this serve as a small reminder that whether a man lieth with man, a woman with woman, or a woman with man, spending those acres of time lying with the one you love is and always will be a wonderful thing.