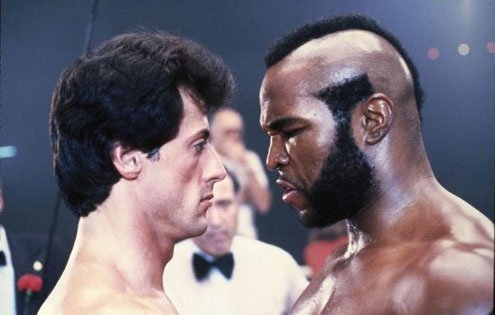 The Eye of the Tiger, but it doesn't always work.
Y

esterday three doctors sat down with two people to discuss one child. The doctors were specialists in pediatric development. The people were my husband and I. The child we were talking about was my first-born. After evaluating my preschooler in every sense of the word, the professionals were finally ready to weigh in. And after months fraught with worry, I was ready for answers.

Note: Anxiety is a verb for me. It’s an activity, something I do in my free time, for sport or as a creative outlet. I don’t just concern myself with existing problems, I also conjure up problematic scenarios. In other words, I invent causes for concern.

My mother always told me not to worry about life’s “what ifs.” But since I rarely listened to my mother (I was the rebellious type), I often think…

What if… I get to that corner, and that late model Toyota crashes in to the Mercedes and the Mercedes jumps the curb and hits us.

What if… someone tries to steal my Irish passport and I can’t go through the faster EU line at the airport.

What if… the next time I am in the U.S., I eat too many doughnuts and end up with some type of doughnut-binging digestive problem.

This is ridiculous. I know.

My mother also told me never to worry until there was something to worry about. But when it came to my son, the worry had turned real. Born premature, he spent his first weeks in an incubator that beeped and whistled. Tubes sprung from his belly, his foot, his arm and his head. Though not the picture of health, he was a feisty little guy. I helped him along by providing him with an unlimited supply of my maternal milk and by quietly singing him the anthem to “Rocky 3.” To this day, “The Eye of the Tiger” still brings a tear to my eye. My left one. (I also have seasonal allergies.)

This year it became clear that his speech delay wasn’t a result of his bilingual culture nor was his behavior the result of the “terrible twos” phase. As his peers surged ahead, he remained a hard-to-handle toddler. While they asked questions and told stories, he was isolated and irritable. While they drew pictures and painted images, he refused to hold anything in his hand. I worried about every possible scenario and any possible solution.

I made calls and pulled favors. I had him seen by several doctors. After five minutes, one said, “I would say he is autistic.” This hasty and irresponsible opinion haunted me.

I pulled another favor where two other doctors observed him at length and said, “He is not autistic.

A third set of doctors then told me, “It’s too soon to say anything.”

“Good news his hearing is perfect.” Was it good news?

“His eyesight seems to be normal.” Yippee. Sic.

The more good news I got the more panicked I became. I wanted a physical ailment, something I could squarely blame. I didn’t get one. He was healthy.

Finally they called us in. Yesterday. I thought the time had come for them to lift the veil and reveal what we had been waiting for: answers.

They didn’t. They told us what we already knew: That our son was developmentally delayed and they didn’t know why. They suggested continuing the therapy and gave us a “let’s wait and see” prognosis.

I wanted to kick and scream and hail a cab for the U.S. I wanted to help my son. I felt like I was spinning my parental wheels. Then I remembered what a new friend had told me, “Think of every doctor appointment like it is a video game. You don’t ever finish, you just get to the next level.” I hated video games (except for a brief relationship with Ms. Pac-Man and Frogger in the fifth grade), but what she said made sense.

Diagnosing a child with special needs is not like a childhood game of Atari pong. One match… one opponent … game over. Diagnosing a preschool child with any kind of neurological delay is more like playing the latest PlayStation Grand Theft Auto.

Sure, there are no cars involved (or hookers or guns either), but the game is complex and lengthy. I am anxious to see where the next level takes us, grateful for now to have mothers around me to offer their wisdom and support.