What a Time it Was: The Best of W.C. Heinz on Sports 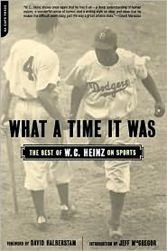 In the 1952 story “G.I. Lew” about Lew Jenkins, a former lightweight champion who enlisted in the Army and won a Silver Star in Korea, W.C. Heinz shows his mettle. Reporters laid into Jenkins after an awful bout, but Heinz knew the fighter had three broken vertebrae following a motorcycle accident and a drinking binge. “They knew a lot about Lew and they put it in the papers, but they didn’t know the half of it.” Heinz was in the business of filling up so many halves in a time when writerly imagination was at most at home with simple, declarative sentences. He listened hard, took notes, and used Salinger-style vernacular to distill the honor and loyalty between the lines of all the sports he covered.

The fiction in this vital volume includes an excerpt from MASH (few know Heinz ghost wrote it) and a gorgeous and brief baseball story published in Colliers and called “One Throw,” in which a veteran scout disguises his identity to measure the moral principles of a prospect.

Some have called Heinz America’s greatest sportswriter. Ernest Hemingway and David Halberstam tipped their hats; David Maraniss is a fan. Heinz got to the so-called “New Journalism” before anyone even had a name for it. That’s how it is with naturals. Heinz died in 2008.