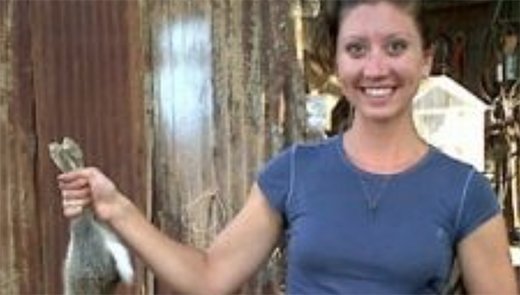 Hunting was all in the family.
I

t’s hard being a granola-eating, fair-trade buying tree hugger. So many rules, so many hoops to jump through. And each one matters.

Consider the Korst family, which decided to live trash-free for one year (they ended up with three pounds of total trash). They based every decision on that one goal. Should I buy that dress? Should I have fast food or pack a lunch? Should I get popcorn at the movies? Should I recycle this? Should I lug around reusable grocery bags?

Though the Korst story focuses on trash, tree-huggers are concerned with much more than what they get rid of. It’s “Reduce, Reuse, and Recycle,” in that order. First you reduce what you buy, then you find ways to reuse, and when the milk carton-cum-plant waterer-cum-detergent container-cum-science project runs out of uses, you recycle it.

These days I add “responsibly acquire” between “reduce” and “reuse” — which makes tree-hugging taxing and simple to-do lists complicated.

I want you to close your eyes and imagine the lives of people in sweat shops who produce our one-season-only dresses and assorted casual wear. Really. Picture it for one minute before reading on.

Suddenly, #3 on your to-do list — get flip-flops for beach — requires research and two-weeks planning.

Okabashi offers affordable honorably made flip-flops, but other purchases can be head-scratchers.

If all shelving I find is made in China, then I have to make my own. But where do the wood and the nails come from? If I buy second-hand merchandise made in Thailand am I still supporting the chaining of small children to machines as they work 12-hours for their suppers?

There’s more: The best computers are Chinese-made. Is supporting the American economy really worth the hassle of owning a virus-ridden, pop-up plagued PC?

The path to pure-zen-via-hippiedom contains conundrums, some incidental, some less so.

Where, for example, does the word “cobbler” come from (I pause on this while waiting in line with my ancient Camper deck shoes)?

Answer: No one really knows.

Do leather products come from strictly leather-producing animals, or from the hides of animals who are slaughtered to eat?

Answer: Generally from the latter.

Since fossil fuels were produced during a period in the Earth’s evolution when carbon didn’t decompose, could we create a new supply of fossil fuels millions of years down the line from the plastics in our landfills?

Should I feel guilty about my decorative band-aid collection since they were probably all made in China?

Answer: No. You have to draw the line somewhere.

About a decade ago, in line with my sweatshop-economy boycott, I decided that I’d only eat “happy meat” — meat that comes from roaming animals. But then I read some books, most-memorably “Fast Food Nation,” and any involvement with it seemed… icky.

Enter my brother, a seriously large, camo-wearing, bow-toting, Midwestern hunter. He “catches” a deer for me yearly (a lovely euphemism, “to catch,” which I borrowed from killing fish). Some people accuse my brother of cruelty, since he’s a hunter. I gently call them ignorant for eating animals without paying attention for how their meals get to the table.

But my self-righteousness was recently put to the test. My cousin Ian and his girlfriend’s father Jorge pounced on me for the likes of “catching.” What, they said, was the point of going on a hunting expedition — which I’d promised to do — if I couldn’t do any actual hunting?

I told them that I didn’t know how to shoot a gun and didn’t want to maim a poor rabbit. This worked for a few hours until they recommended target practice. I knocked two lemons and a shotgun shell off of a table from fifty yards on my first few shots. Beginner’s luck.

They didn’t bite. I sighed, and off I went with Ian and my .177 caliber Benjamin Dual Fuel PCP & CO2 rifle coolly slung (or so I thought) over my shoulder. Twenty minutes later he said a prayer of thanks over my first kill, a rabbit, and we headed back home to prepare and cook.

With great patience, Jorge showed me how to clean an animal properly. He then gave me some whiskey (for my pallor) and handed me my rabbit. Rabbit stew is tastier than people will have you believe.

The moral of the story may go something like this: Young ladies like myself shouldn’t advocate for any processes they won’t for see themselves and participate in. Also, people should probably stay away from wearing “What Would Jesus Do?” bracelets (or their equivalents) if they aren’t ready to seriously alter their lifestyles.