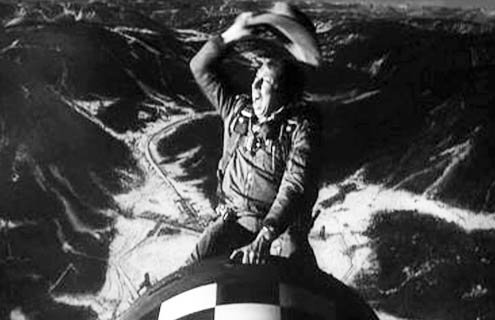 Slim Pickens: Off the get the Russkies.
W

hat to do when everyone’s fretting about nuclear annihilation? Stanley Kubrick’s reply was an epileptic satire as disorienting as an orgasm. It’s as if the end-of-the-world invited him to make fun of it — which it does, sort of. In fact, when “Dr. Strangelove” was first released in 1964 he billed it as a “Hot-Line Suspense Comedy” (full title: “Dr. Strangelove or: How I Learned to Stop Worrying and Love the Bomb.”) But what’s all-out comedy now was wildly nervous comedy then.

But the Russkies have a “fail safe” (see Sidney Lumet’s so-named 1965 movie as a counterpoint): it’s a “doomsday device” that will trigger global conflagration if tickled. The predicament leaves U.S. President Merkin Muffley (Sellers again) to work out (fallen) mankind’s fate in a war room that includes über-coiffed former Nazi mastermind Dr. Strangelove — suddenly, it’s a Sellers triple-header — and overwrought Gen. “Buck” Turgidson (his majesty George C. Scott). Scott and Hayden, though never on screen together, seem locked in a grudge match over who can pull off the wilder military caricature. They both win.

What’s lost to the pitch-black hilarity is how scary this all was. Two years before the film’s release, Moscow and Washington had nearly exchanged gone to war over Cuba. JFK had just been assassinated. America seemed in no mood for artsy caricature.

But Kubrick’s cast flanks covers his flanks beautifully They take and hold the citadel that lies between earnestness and absurdity, patriotism and folly, driving audiences into defensive guffaws and disbelieving howls, just the cocktail Kubrick sought. Somehow, he whittled all this down to 96 minutes, an inadvertent representation of a more circumspect, non-blog world where blabbering self-indulgence usually cost you big-time.

This is great ad for the American version of the free world: only a functioning democracy would allow and absorb its antic drive. It seems hackneyed to say, “One of the greatest accomplishments ever,” but there you go.

Louis Malle couldn’t have been less interested in Kubrick-style bluster. His filmmaking put micro ahead of macro. In the 1971 “Le Souffle aux Coeur” (“Murmur of the Heart”), we meet 15-year-old Laurent Chevalier (Benoît Ferraux), who is coming of age in Dijon of the early 1950s. That understates it, since Laurent is the bourgeois son of bourgeois parents with two sexually mischievous older brothers.

He’d like to think he’s older than he is. So would his priest, who’d love to fondle him, and his young and beautiful mother Clara (Lea Massari), who can’t get enough of her youngest son even though she’s having extramarital affair.

When Laurent is diagnosed with a heart murmur, he’s sent to the seaside. There, Mom Clara talks to him, tends to him, and befriends him in a way that suddenly and non-salaciously merges the mother-son bond. She seized with a genuine desire to “settle” an outstanding piece of her son’s adolescence.

When released, Malle’s partly autobiographical movie got its share of shock and awe. But the incest, stunning because it’s territory usually reserved (on film) for fathers and daughters, is Malle’s uncanny way of providing crowning insight into the peculiar but loving family he’s created. It’s hugely a benevolent film; perhaps Malle’s finest and most sincere.

Sincere but not entirely benevolent is John Cameron Mitchell’s 2001 “Hedwig and the Angry Inch,” which its maker called a “post-punk neo-glam rock musical.” That’s ferociously cool but not terribly helpful.

Meet Hansel, a gummy bear-loving East German boy who endures a botched sex change operation to head West with a gay American sergeant (Maurice Dean Witt). America, however, is cruel to Hansel-turned-Hedwig (Mitchell). In order, the Sarge dumps her, she-he starts a band, turns tricks in Kansas, and has an affair with wannabe rock’n’roller Tommy (Michael Pitt), who ditches her (he also steals her songs and makes it big).

The adult Hedwig is Dietrich-bitten transatlantic trans-sexual pitching screechy ballads in backwater dumps with a band called “The Angry Inch,” which is what Hedwig got out of her surgery.

The campy outrageousness of the premise doesn’t change the focus on gender, longing, and hysteria. It’s also an extended rock’n’roll outtake that makes rock culture into a suicide weapon. Mitchell, who did his Hedwig show off-Broadway, tops himself time and again in a cult performance for the ages.