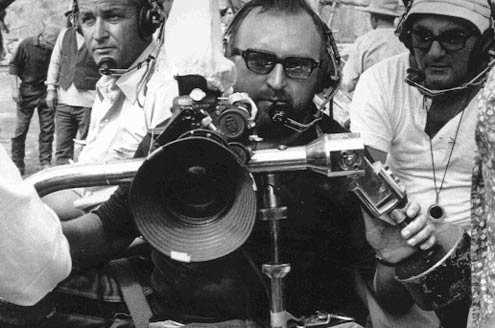 Sergio Leone on the set: "It is a great shame if 'America' is always to be left to the Americans."
I

The international blockbuster success of Leone’s 1960s Clint Eastwood films, including “Fistful of Dollars,” “For a Few Dollars More,” and “The Good, The Bad and The Ugly,” along with the 1968 epic, “Once Upon a Time in the West,” were instrumental in revitalizing the floundering Western genre. Leone’s operatic and violent stories, acclaimed by film lovers for their stylistic and narrative verve, as well as for composer Ennio Morricone’s quirky, heroic scores, ushered in a slew of low budget, Italian-made Westerns unkindly dubbed “spaghetti westerns.” Some 600 were made.

His solo break came in 1959 when he stepped in for ailing Mario Bonnard in “The Last Days of Pompeii.” Filming took the crew to Andalusia in southern Spain, where Leone, who had already been considering making a Western, saw the rugged Almerian desert as a dead ringer for America’s frontier landscape.

All the while, Leone never forgot his parents’ involvement in “La Vampira.” Biographer Christopher Frayling suggests Leone’s fascination with the West stretched back to his childhood, a time when his matinee idols were Errol Flynn and Gary Cooper. “America was like a religion,” rhapsodized Leone, who grew up in Rome’s Trastevere neighborhood. “I dreamed of the wide open spaces of America. The great expanses of desert. The extraordinary ‘melting pot,’ the first nation made up of people from all over the world.”

This idealized vision of America changed abruptly during World War II, when American GIs advanced north through Italy. “They were no longer the Americans of the West,” lamented Leone. “They were soldiers like any others… materialists, possessive, keen on pleasures and earthly goods.”

With Hollywood’s saccharine fading, Leone resolved to make films that would “show the cruelty of that nation. I was bored stiff with all those grinning white teeth.”

When the first of Leone’s Eastwood films, known popularly as the “Dollars Trilogy” or “Man with no Name Trilogy,” debuted in American theaters in 1967 (they had already set box office records in Italy), Westerns were still considered by Hollywood to be a uniquely American genre.

Leone’s gritty Western approach veered away from the romanticized Hollywood take offered up by the likes of John Ford, whose films were praised by New Yorker film critic Pauline Kael for their “pastoral beauty and evocative nostalgia for a simple, basic way of life.”

Leone made ruthless outlaws into Wild West heroes and transformed the terrain into a barren and inhospitable place where banditry is handsomely rewarded, misogyny is unapologetically rampant, and cold-blooded killers inflict violence indiscriminately.

In “Once Upon a Time in the West” with Henry Fonda and Charles Bronson, the violence includes child murder and rape. In “The Good, the Bad and the Ugly,” the Civil War rages on in the background as Eastwood and fellow miscreants Lee Van Cleef and Eli Wallach race to outsmart and outkill each other on a hunt for buried loot. Violence is inescapable.

“The cowboy picture has gotten lost in psychology,” Leone, who also co-wrote several of his films, once observed. “The West was made by violent, uncomplicated men, and it is this strength and simplicity that I try to recapture in my pictures.”

As Leone’s action-packed, two-hour-plus spaghetti westerns grew successively bigger and badder, it became clear that an Italian director had masterfully wrested the sacred reins of the Western from Hollywood’s hands. In 1972, Crowther’s successor, Vincent Canby, wrote that Leone’s pictures “always have the strange look and displaced sound of an unmistakably Italian director’s dream of what Hollywood movies should be like, but aren’t.”

Now, decades later, critics and film buffs alike consistently rank the “Dollars Trilogy” and “Once Upon a Time in the West” as among the top Westerns ever made, spaghetti or otherwise. They blazed a new trail in Italian filmmaking and for more than a decade kept an entire industry afloat in Italy and Spain. They also inspired a tough-minded group of future directors, including Sam Peckinpah, Quentin Tarantino and David Lynch. In 1992, when Clint Eastwood won Best Picture Academy Award honors for his own Western, “Unforgiven,” he dedicated the prize to Leone.

Leone directed just four more films after “Once Upon a Time in the West,” three more spaghetti westerns followed by 1984’s extravagantly bloody, nearly four-and-a-half hour long gangster epic, “Once Upon a Time in America,” which he famously turned down “The Godfather” to direct. Starring Robert De Niro and James Woods, the Italian director’s final film — he died in 1989 — rounded out two decade’s worth of plumbing America’s outlaw soul. “It is a great shame,” Leone once said, “if ‘America’ is always to be left to the Americans.”