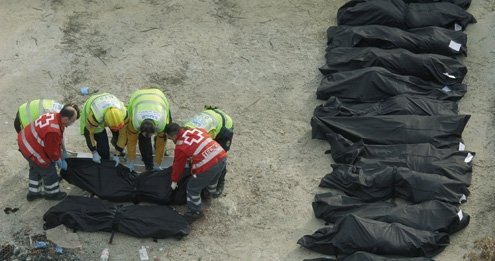 Madrid: Collecting the dead.
B

At least 400 people were killed and more than 1,200 injured in the explosions, according to preliminary police figures.

No group immediately claimed responsibility for the blasts, apparently detonated by remote control, but Italian officials immediately suggested that the Islamic fundamentalist group Al Qaeda was behind the bombings.

It was the deadliest terrorist act in modern European history, rivaling the Sept. 11, 2001, attacks on New York City’s World Trade Center towers, which were destroyed, and the Pentagon. More than 3,000 people died in those attacks.

“This is an act of such revulsion that there are no words with which to address it,” said Italian Prime Minister Silvio Berlusconi, speaking in front of the Italian Senate building, only a block from the site of the blasts, which police said happened within 10 seconds of one another at about 2 p.m. local time.

Pope John Paul II, who delivered his traditional Sunday blessing only two hours before the incident, said he felt “inexpressible sorrow” for the loss of life. “Our heart is hurt. Our soul is hurt. Our city is hurt.”

The explosions, apparently detonated near popular ice cream parlors, created 8-foot-deep craters, with shockwaves toppling the historic Fountain of the Four Rivers statue, a tourist haunt for a century. Most victims, many sitting at outdoor tables or walking on a warm spring day, were killed by debris, police said.

They said the popular square was “overflowing” with “a few thousand” visitors on a sunny afternoon. Afterward, dismembered bodies lay strewn in heaps, witnesses said.

“We know this is a terrorist act, and we can only suppose, given recent events in the world, who is behind this kind of barbaric slaughter, this inhumanity,” Berlusconi said, his voice faltering, in an oblique reference to Al Qaeda. “We are living through a war. Only barbarians could do this,” he said.

Berlusconi said Italy had been placed on “full military alert.”

U.S. President George W. Bush, on a campaign trip in Dubuque, Iowa, asked a crowd he was addressing for three minutes of silence to honor the dead. He said he had spoken to Berlusconi, a staunch ally of the U.S. war on terrorism, but did not divulge what they discussed.

“The Italian people are strong people and they understand the meaning of suffering, like all good people,” said the president. “These horrible and deplorable events are another example of why we have years ahead of us to win this war. We will prevail. The world will prevail. We will not stop until we get all the monsters.”

The Italian network Canale 5, closely linked to the Berlusconi government, reported that anti-terrorist police had discovered a flier in Arabic near the scene. “Praise be to God that Rome, another pillar of the axis of Crusader evil, has been struck,” the station quoted the statement as reading.

A special edition of the Rome daily Il Messaggero confirmed the television report.

Government officials, however, denied the existence of such a statement, saying only that investigators were “looking into every possibility,” including Al Qaeda involvement.

Piazza Navona, an oblong square that dates to Roman times, is among the most popular destinations in Italy. The giant Statue of the Four Rivers, built in 1650 by architects under the supervision of Gian Loronzo Bernini, was a favorite among tourists seeking a Rome snapshot.

Victims were rushed to local hospitals, where up to 500 were in critical condition, said Rome Mayor Walter Veltroni. He said the dead numbered “dozens of residents, tourists and passers-by,” although he said it was too soon to identify the nationalities of the victims.

At least 40 children between the ages of two and seven were among the victims, said a spokesman at Rome’s Fatte Bene Fratelli Hospital, which treated some of the wounded.

Eyewitnesses said they were dumbfounded by the carnage. “I got this email a few weeks ago saying, ‘Something bad is going to happen in Rome,’ but this isn’t bad, this is the end of the world,” said Betty Mariani, a 30-year-old high school history teacher from Rochester, New York, who said she was a block from the piazza at the time of the explosions.

“I was walking toward the fountain with my husband when I heard one thunder noise, then another. Then it was just smoke and blood everywhere,” Mariani told CNN.

Police bomb squad officials speculated the bombs that caused the blast could have been concealed in coffee bars, since no local vehicle traffic is permitted in the square.

U.S. Embassy officials said they had received hundreds of calls from relatives of U.S. citizens on holiday in Rome. “We’re not telling them anything yet, because we just don’t know what to say,” a spokeswoman said.

The Rome explosions came only two months after the train bomb blasts in Madrid. After those explosions, the Spanish government initially blamed the Basque separatist group ETA, only to later attribute the attacks to Tunisian members of Al Qaeda.

One local police official, identified as Dario Chieti, told Italian television that anti-terrorist officials had grown “increasingly fearful” that Rome, the seat of the Roman Catholic Church, would be targeted for attack. The Vatican and St. Peter’s Basilica are only a mile from the site of the explosions.

“How do you protect an open piazza? Do you shut down the city?” said Chieti.

Veltroni, the Rome mayor, paraphrased U.S. President Franklin D. Roosevelt. “There is nothing to fear but fear itself, so we can’t allow ourselves to stay afraid for long.”

—An explanation: On March 11, an Al Qaeda faction detonated 10 bombs in Madrid train stations, killing 191 people. Since those attacks Italian media has dwelled on alleged Islamic terrorist activity in Italy and local security concerns. To better understand the concern — bordering at times on the hysterical — I watched news reports and read magazines, including Time Magazine’s astonishing March 29, 2004 piece, “Who’s Next?”, with its chilling cover “target” composite of Big Ben, the Tour Eiffel, the Brandenburg Arch and the Colosseum. I also spoke to academics and taxi drivers, housewives and intellectuals, students and retirees, businessmen and journalists. The following “news fiction” is the appalling sum of fears contained in two dozen conversations. It is meaningful only in its failure to be wholly improbable. There are many ways to chronicle anxiety, but the most chilling is to give it form. That is what I have done. Everything contained herein is cruel invention.