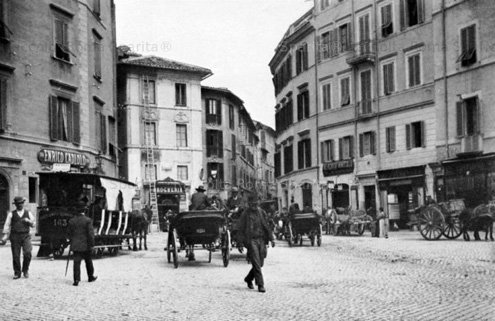 Rome life in the mid-1800s was all about buggies and carriages.
C

laudio has lived in Rome for most of his life and is among my mother’s last remaining cousins. Though we’ve always been a close family, daily life can push some relatives into the background. You rarely see them. By chance, I recently had the chance to spent some time with Claudio, now well in his 80s, and mentioned how much family history intrigued me. It was as if I’d open a magic portal. He started telling me amazing stories about the life and times of his grandfather and my great grandfather Vinceslao, or Wenceslas. Out of the blue, he created whole portraits of long-gone Rome with Wenceslas at the center of both action and anecdotes. I immediately decided to spend my next few columns putting together these stories, with Claudio as the first man up on the podium.

“Wenceslas was a big man with a big heart,” Claudio began. “He was two-meters tall (six-foot-five) and had enormous hands. He worked in the Rome horsemeat business and owned two slaughterhouses, which naturally meant he had a lot of horses. In his youth — this goes back to Rome at the end of the 1800s — he’d ride around the city in a brown buggy with a white hood and polished chrome lamps. He’d always dress up and wore gold rings on each of his fingers.” Looking elegant was vital in those days. If you made a good first impression, said Claudio, you immediately upped your chances of commercial success, since most of the city — barely free of centuries of papal rule — was desperately poor.

“One day,” Claudio continued, “Wenceslas met his Uncle Umberto at Caffè Castellino in Piazza Venezia, a place that still exists. The whole family saw Umberto as elegance personified. The second Umberto saw Wenceslas, he told him, ‘With all those rings you look like the Madonna of Divine Love,’ which made sense, since she’s always portrayed as draped in jewelry. Wenceslas was so upset by the comment that from then on he only wore a ring on his pinkie. Impressed by this change in approach, Umberto gave him a Borsalino lobbia, a Homburg made from felt.”

The lobbia, Claudio explained, got its name from politician Cristiano Lobbia, who in 1869 was mugged and stabbed three times in Florence, then the capital of Italy. The knife attack, later revealed as staged, put a deep crease in his hat. From that moment on, or so the story goes, hat-makers actually built a crease into the top of their hats.

The Rome meat business, Claudio continued, was bitterly competitive at the time, with Wenceslas locked in a battle with a pig meat butcher from the Umbrian town of Norcino who had a store at Piazza della Rotonda (Norcino was renowned for its pig butchers and norcini remains a synonym for butcher in Roman dialect).

“Wenceslas would kid around with his clientele, telling them that the Norcino’s sausages were made from the body parts of the man’s female customers. To prove his point, he’d tell them a strange but true story dating back to the mid-1600s, when Rome was a Vatican state and Urban VIII was pope. A married couple from Norcia sold delicious and popular sausages near the rotonna, or rotunda, of the Pantheon. They also never seemed to run out of meat. Apparently, that’s because it was human meat. The two were arrested, tried and decapitated. The story made the rounds and there are still a few people left who, whenever anyone’s late or just doesn’t show, say, ‘They ended up like the norcini da’ Rotonna.'”

But telling hat particular story backfired on Wenceslas, said Claudio. One day, one of his grandfather’s regular woman customers vanished. Some of his more impressionable clients, remembering the old story, started pointing fingers at a butcher located near the Pantheon. Police got involved and searched the butcher’s store top to bottom, all but shutting him down. Then, of course, the “lost” customer turned up. “Wenceslas was so upset at hearing this that he actually helped the norcino get his business back on its feet.”

But Claudio was just warming up.

“In 1911,” he went on, “Melelik II, then the emperor of Ethiopia, gave Pope Pius X a gift of two lions as a peace gesture. Wenceslas had a store on Via del Panico, just across the Tiber from the Vatican, and sold plenty of meat to the Church. Some of that meat went to feed the lions.

“Well, the two lions mated and had cubs. At this point the Church, sensing it might have a potential scandal on its hand, was stumped, so it had the lions and their cubs killed. Officially, it said the lions had died because they ate tainted meat from the butcher on Via del Panico. Wenceslas read about this in the paper and decided to do something. He had a friend who worked in the Vatican and knew what had really happened. Wenceslas hired a lawyer and sued the Vatican. He ended up not only saving his business, but also getting 5,000 lire in damages — a lot of money at the time. He used it to start his own his own restaurant, Osteria Cavallaro, on Via delle Sette Chiesa in the Garbatella neighborhood.”

According to Claudio, Uncle Wenceslas served only traditional Roman cooking, based mostly hand-me-down family recipes. “He was completely responsible for getting the meat and the wine, which came from Marino, in the hills outside Rome.”

The Marino trips were their own adventure. “He’d leave in a horse-drawn carriage, and, once in Marino, load up some barrels. In those days, you had to pay customs to bring wine into Rome. So he’d pack most of the barrels with grain and hay. Only one actually contained white wine. When he’d got to the Rome checkpoint on Via Appia, he’d get out, which you had to do by law, and the customs agents would hammer on each barrels to make sure there was no liquid inside.

“What they ignored was the barrel Wenceslas was hauling under his arm. They just assumed it was empty like the others. That’s how he’d get his white wine to the restaurant duty-free!”

Still, it seemed strange to me that the customs officials would simply overlook the barrel Wenceslas was carrying.

“A barrel of wine usually weighed at least 50 kilos (110 pounds),” Claudio explained. “But Wenceslas was so big and strong he carried the barrel around like a baby. No one in the world could have believed he was hauling a full barrel of wine. This was a man who could kill a donkey with a straight punch to the face, and he did that a lot since he also butchered contraband meat in the restaurant basement. Butchering a horse at the slaughterhouse meant losing half the animal’s value to taxes.”

At the restaurant, Marianna, Wenceslas’s wife, did most of the cooking, said Claudio. He’d focus mostly on jerky, or coppiette (couples), strips of dried donkey meat skewered and grilled. The strips were tied in pairs (hence the name) and hung to dry and aged in a hearth. The dish still exists, now made mostly from pork.

“At the time, coppiette were served in baskets on a bed of straw, tied together with red laces. People loved the ones that Wenceslas made because he took time out to marinate them in Marino wine for days before serving. He had repeat customers who came for the coppiette alone. They have a glass of red wine and listen to stories from the man who put donkeys out of their misery by punching them in the nose.”

You can still get coppiette at most local salumerie, Rome meat delis, but I’ve find my own way of honoring Wenceslas at home — without dead donkeys and hearths, which rarely come with Rome apartments.

These ingredients form part of a meat marinade.

— Mix everything together and make sure the sugar dissolves completely. As the mixture dries, the soy sauce will gradually have a caramelizing effect.

— Once that’s done, place everything in a tightly sealed container and stick it in the fridge for at least 48 hours. Open the container at least twice a day to ensure the marinade uniformly covers the meat.

— After the marinating process, the meat should still have its rosy color, darkened slightly by the soy sauce. Take the meat out, stick it on metal or wooden skewers, and place it over the grill.

— Pace the skewers in an oven heated to 60C (leave the oven door open slightly). The skewers should roast overnight, between 6 and 8 hours. The low temperature will keep electricity usage under control. To avoid splatters, place aluminum foil on the oven floor.

Coppiette go well with any number of Lazio wines, but I’d recommend Cesenese del Piglio or dry Marino white, available in most supermarkets. These days you don’t need to worry about a cart or fooling customs agents.