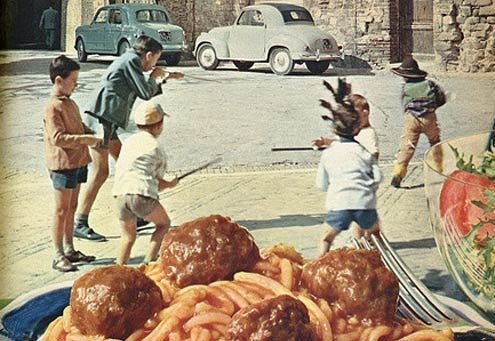 Detail from a 1964 Chef Boy-Ar-Dee ad: "Fill a plate with energy and real Italian flavor."
A

lberto and I are strapped into our seats. It’s an Air Canada flight to Frankfurt and then on to Milan. We’re stuck in the center aisle (we had to swap with three people just to be seated together). We’d reserved months in advance, dutifully checked in online, and gotten to the airport three hours early. The least they could do was seat two traveling partners together. The check-in guy assures us it has nothing to do with us being male couple: the airline indiscriminately treats everyone like shit.

The jet engines fire up, the pilot releases the brakes, the stuff in the galley rattles, and we’re off and rolling toward the takeoff runway. I play with my video screen but they keep interrupting with annoying safety instructions, which I have a hard time taking seriously. Should I survive the free-fall from 30,000 feet, I just don’t see myself using the inflation device stored under my seat so that I can float around in the North Atlantic in late December waiting to hitch a ride with some passing fishing boat. Maybe I’ll watch “Titanic” on video later.

It’s been seven years since I last visited Canada and I feel as if I am passing through a hiccup in the time-space continuum. I find that a lot has changed, but I still know where to find light switches, which way doors open, and how to buy subway tickets (none of which, after more than 10 years in Italy, comes easily). When I speak with people in the street I sense something indefinably familiar and comfortable about them, as if we might share kinship ties, even if their faces suggest ancestry from all over the globe.

Most of all, Alberto and I are struck by the enormous sense of pride Canadians feel about being a tolerant multicultural society. In Canada, gay people have equal rights and are protected by law. We see a small graffiti patch on a wall that reads, “Fear is a disease.” Maybe in Canada a gay person can now live without fear. Be that as it may, Italy is now my home.

I begin daydreaming about how imagined Italy while growing up. Though I now view these memories through the eyes of an adult, they were once understood and recorded by the mind of a child.

It was the 1960s and wild, crazy, radical ideas — such as eating yogurt — were coming to my middle-of-nowhere village. I remember asking what yogurt was and being told it was just sour coagulated milk that, for some unknown reason, Europeans (meaning not British) liked eating.

One memory triggers another. I recall my grade five geography lessons about Europe and how strange it all seemed at the time. Though the most of the kids in my village came predominately from the English/Scottish/Irish gene pool, Great Britain was not our idea of Europe. Holland had cool windmills and dykes and Germany had highways without speed limits, but Italy was generally the favorite. First of all, it was shaped like a boot and a football, so even the dullest kid in the class could find it on a map test, whereas Great Britain could easily be mistaken for Iceland or Norway.

But most of all Italy had spaghetti and pizza. Homemade “Italian” spaghetti was a favorite at meal times (not to be confused with the canned stuff, where the four meat balls looked like dog food). The truth is most of us had never eaten pizza but American TV had convinced us that next to McDonalds (which most of us had never tried, either) pizza was the greatest food on earth. I remember one boy asking why Italians ate spaghetti and pizza all the time. The answer was simple, at least for those of us who grew up on farms. The meat was often rotten so the Italians had to disguise the flavor with lots of spice and hide it in a pizza or in a pile of spaghetti.

Our geography books showed gorgeous photos of Naples with Mount Vesuvius in the background, of Pompeii, Mount Etna, the Coliseum, and the canals of Venice. At Sunday school the well-informed kids were always more than happy to share their knowledge about the evil Coliseum where Christians were fed to the lions. Venice made us imagine that Italy was in a constant state of flooding so people had to use boats to get around. But for most of us, Pompeii was the biggest mystery: how could everybody have been sitting around eating one minute and be covered with lava the next. Oh the horror! Perfect for a 10-year-old’s imagination.

I remember another boy asking how come anybody lived in Italy if it was so full of volcanoes? The answer: they had nowhere else to go. They were trapped between sea and volcanoes.

Over the years, I heard all kinds of fascinating myths about Italy. I was told that all Italian men pinched women’s bottoms (I’ve since run into a few North American women who seemed disappointed they didn’t get their bottoms pinched while visiting Italy). I was told there were no public washrooms, just small holes in the street. Out walking I’ve been desperate enough at times to wish I could find one of the mythic holes. And, of course, Italians were maniac drivers. Personal experience has taught me this last one is more than a myth.

But I’m suddenly jolted back to reality. The flight attendant rolls the dinner trolley down the isle and crams it into my knee. So why, I now ask myself, did I leave my old Canadian home, with its 70-below winters, its year-round snow, its free-roaming bears, to go live in Italy with its flooded streets, pizza, and volcanoes?