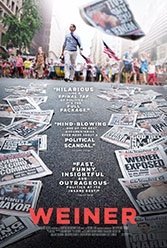 “The punch line is: I did the thing.” Anthony Weiner’s words open this extraordinarily powerful documentary that follows the Democratic politician’s 2013 campaign for New York City mayor, a run he began two years after he resigned from Congress for sexting a photo of his bulging underwear.

That Weiner would welcome these documentarians into his campaign, his house, his fatherhood, his marriage suggests his desperate need for the spotlight, and to watch himself in that light — on his cell phone, his computer, his television. It’s even more surprising because, as we discover while watching this film, he continued to sext as the film was being made, as he was campaigning for mayor, as he was doing his mea culpas. “I learned some tough lessons,” he says in a campaign ad. But he didn’t. Not only did Weiner sext in the middle of the campaign, he was caught at it again in August, with his toddler asleep next to him.

The first time I saw “Weiner,” I had mixed feelings about the protagonist. He seemed irredeemably egotistical and narcissistic, but also open and engaging, and an effective, passionate liberal politician. Viewing it again, after the latest sexting scandal when his wife, Huma Abedin, a top Hillary Clinton aide, finally decided to leave him, I saw an agonizing portrayal of a woman betrayed. There was no room for empathy for Weiner.

It’s the gorgeous, sad-faced Abedin who comes to the fore in the film. A clam, refined and smart woman, she’s the one who agrees to campaign with her husband and repeatedly gets up and vouches for him: “I love him. I’ve forgiven him. I believe in him.” She’s also the unsmiling one sitting on the floor of the baby’s room, or eating pizza at the dining room table by herself while Weiner proudly watches himself on television. He garnered less than five percent of the mayoral vote, if anyone cares.

Abedin paces, looks away, taps her fingers. Finally, when one of her husband’s sexting partners is about to chase them to the room where he’ll give his concession speech, Abedin says, “I’m not going to face the indignity of being accosted by this woman.” And we feel her pain. Deeply.