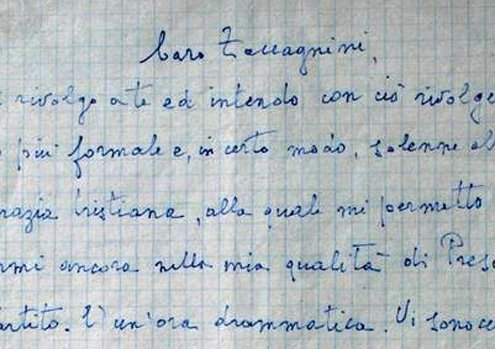 n March 16, 1978 Red Brigades commandoes abducted the president of Italy’s ruling Christian Democratic Party after intercepting his Rome motorcade and gunning down his six bodyguards. The brazen kidnapping of Aldo Moro set off an eight-week ordeal that would culminate in his assassination.

The attack also solidified sinister reputation of the extreme left Red Brigades, already responsible for dozens of shootings throughout Italy in the previous two years. The Red Brigades were a disenchanted spin-off of militant left wing organizations determined to bring down Italy’s parliamentary democracy — labeled as corrupt and imperialist — and replace it with a Marxist-Leninist “people’s” system. Their violent strategy was developed by ideologues convinced the response to terrorist violence would be wholesale repression that would in turn trigger a national uprising.

At the time of his abduction, Moro had been advocating a so-called “historic compromise” that encouraged the Christian Democrats to work more closely with the country’s powerful Communist Party, the largest in the West. Militant groups felt betrayed by the idea of such an agreement and kidnapped its chief advocate as a result.

Most intriguing about the drama, however, was its evolution, as thousands of Italian police units mounted a fruitless national search. From captivity, Moro wrote a series of letters, some indicting his party, others reflecting on his “trial,” and a few angrily admonishing the insensitivity of his political allies. Copies of these letters — which represented a kind of epistolary blog — were usually dropped off in city trash bins, with newspapers notified where to find them.

The letters gradually acquired the power of a soap opera, as Italians wondered if Moro was in fact the author (they were hand-written), the extent of his duress, and how seriously to take his criticism of fellow politicians. They served up a master class in psychological warfare in which the ruling Christian Democrats were put on the defense for failing to negotiate for his release. Some public opinion turned toward conspiracy theories, suggesting Moro’s party had orchestrated the kidnapping to derail his political moderation. Others believed he’d been abducted to discredit the mainstream Communists. Still others though Italians could not handle such a sophisticated operation and assumed it was being coordinated by the CIA or the KGB (in fact, all his abductors were Italian).

In one letter Moro suggested “American or German” efforts might be behind his kidnapping, a reference to U.S. and West German opposition to his middleman role in bringing the Communists into the fold. “Weigh your actions carefully,” he wrote to his friend, then-Interior Minister Franceso Cossiga, who would later resign. In another, he wrote, “I cannot prevent myself from underlining the wickedness of all the Christian Democrats who did not agree with my position,” suggesting palace intrigue and attacking the party’s chairman and his backers (“My blood will fall over them.”) The ruling party responded by suggesting Moro had been “morally compromised,” or brainwashed.

In one of the Red Brigades’ final communiqués before the group “executed the sentence to which Aldo Moro has been condemned,” the former prime minister attacked the Vatican for its failure to intervene, leading an ailing Pope Paul VI to publicly beg for Moro’s life — an unprecedented act by a pope.

In a pre-reality show age, the Moro letters were water-cooler-style theater that evolved through installments until, on May 8, Moro wrote to his wife: “Dear Norina: they have told me they are going to kill me in a little while… I kiss you for the last time.” He asked members of his party not to attend his funeral and insisted the government “could have done something if it wanted to.”

The next day, his body was found in a car in central Rome. While the Red Brigades successfully accomplished one objective, weakening the mainstream Communist Party, their efforts did not produce the intended backlash. Christian Democratic hardliners who had long opposed Moro’s mediation saw his absence as a way to increase their influence. Socialist leader Bettino Craxi made political hay from the ensuring recrimination and later became prime minister. The “historic compromise” was set aside and the Italian Communist Party lost traction in the 1980s.

Moro’s prison was later revealed as a Rome apartment, and one of his Red Brigades captors, Mario Moretti, arrested in 1981, insisted the 55-day ordeal shook up even the terrorists. “I felt infinite compassion for Moro,” he wrote in a later book. “Nobody in the world should ever have to feel as alone as he did. Here was a man who knew the most powerful people on earth; the men in the government were his men, the interior minister his friend, and not a single one of them lifted a finger to help him, or made the slightest move to step forward from the pack. This was what Moro could not accept.” Moretti was sentenced to life imprisonment but released on conditional parole in 1997.

The 1978 Moro incident, and the insidious and divisive role of his letters, led to the revising of anti-terrorism policies that placed a greater emphasis on the concept of non-negotiation, now the watchword the response to most abductions.