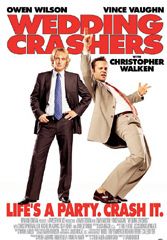 Jeremy Grey (Vince Vaughn) and John Beckwith (Owen Wilson) are thirtysomething men who crash weddings to get laid. Long and short of it, they raid one ceremony too many and are entrapped by love and commitment. This lewd buddy movie can’t decide whether it’s gag-fest or a conventional romantic comedy.

The early going is an adolescent romp in which Jeremy and John are Laurel and Hardy frat boys and their cartoon women stupid and sex-starved. “I am a cocksman,” says Jeremy. OK, whatever. It’s sleazy, vulgar, and guzzles tits to establish lowbrow credibility. Then, director David Dobkin switches gears, or tries, with John smitten by Claire (Rachel McAdams), a politician’s pretty daughter. Dobkin tries for a “Meet the Parents” feel, but he lacks the character depth to go with all the gooey feel-good.

The painful part is that, gross gags aside, there’s little that’s funny and nothing that’s clever. But, then again, I’m not a spring break kinda girl.