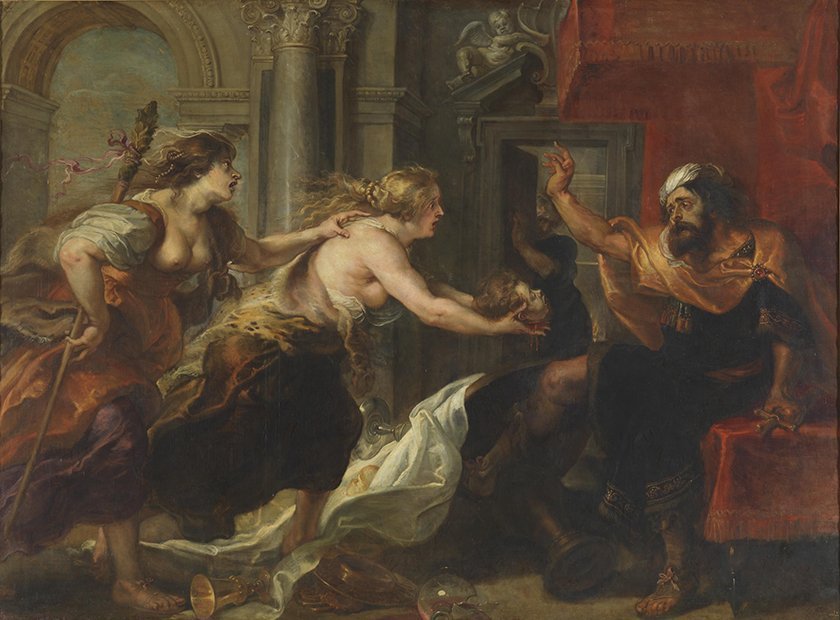 Revenge as a meal best served hot: Procne delivers her husband the head of their son to avenge her raped sister.
S

torytelling is intrinsic to humanity. Since the dawn of time, people have felt compelled to tell stories, whether those stories are myths, legends, folk tales, orally recited parables, religious doctrines, or literature. These stories, which reflect the human perception of the goings-on in the world around them, have been central to life on the planet for millennia.

The process of story-making contains fundamental cultural ingredients that, when woven together, mesh into what we call plot. It is no accident that the patience and industriousness associated with the process of narrative development has often found an analogy in the act of weaving. There are several (and recurring) examples of the bond between weaving and narrative, but here I’ll focus on three Greek myths.

In the Greek pantheon, a number of figures are responsible for elaborating the key threads of life. They include the Moirai, the goddesses of fate, Clotho (the Spinner), Lachesis (the Allotter), and Atropos (the Inflexible).

Each thread of life is then predetermined and no one, not even the gods, can interfere with this mastered order.

They destiny of every person is determined by Clotho, who spins the thread of all that lies ahead in life. Lachesis measures this thread and weaves it into the textile of the person’s worldly actions. Finally, Atropos cuts the thread, establishing lifespan, because all must end. This system permits the Moirai to stitch the life story into the endless tapestry the world represents. Each thread of life is then predetermined and no one, not even the gods, can interfere with this mastered order.

A far more disturbing example of this protocol is the myth of Procne and Philomela, the two daughters of the king of Athens. According to Ovid’s “Metamorphoses,” Procne was married to Tereus, king of Thrace. On the fifth year of their marriage, Procne, who dearly missed her sister, asked her husband to bring Philomela from Athens to pay a visit. Tereus agreed, but on the journey back to Thrace he stopped in a cabin in the woods, where he raped his sister-in-law. She should tell no one, he said threateningly. But Philomela was defiant and determined to seek revenge. Aware of this, Tereus cut out her tongue, left her in the woods, and told his wife that she’d died. Although unable to speak, the mutilated woman nonetheless found a way to make her story known. She escaped the woods, and once home wove a tapestry detailing all that had happened. It took her an entire year to finish the detailed textile work, and when it was finally ready, she travelled to Thrace and brought it to her sister.

Shocked and enraged, Procne plotted revenge against her husband. She killed her own infant son, Itys, cooked the corpse, and served the macabre meal to an unsuspecting Tereus, who ate his dinner with gusto. Only when he had finished did Procne and Philomela enter the room, offering him the severed head of the child as a ghastly present.

Last but not least is the myth of Arachne, a maiden from Lydia (in modern Turkey) known for her extraordinary weaving skills. According to Ovid, Arachne was so proud of her skills that she refused to acknowledge they had been vested on her as a gift from the goddess Athena, patron of wisdom and craft. Instead, she actually claimed her talents were greater than those of the goddess herself.

Anyone familiar with Greek mythology knows Athena is not a lenient divinity. Arachne’s arrogance enraged Athena, who challenged her to a weaving contest.

And here comes the interesting part: In her cloth, Athena chose to depict the power of the gods and filled it with several scenes of the Olympus deities punishing humanity for its wrongdoings.

Conversely, Arachne chose to portray lascivious acts the Olympus gods often indulged in, including the frequent metamorphoses that allowed them to participate in sexual relations with humans, many of them non-consensual.

At the end of the contest, the perfection of Arachne’s work could not be denied. It was in fact flawless.

She killed her own infant son, Itys, cooked the corpse, and served the macabre meal to an unsuspecting Tereus.

Athena became so livid she destroyed it, and repeatedly struck Arachne until she hanged herself.

Only at that point did Athena take pity on the girl and decided to save her from death, transforming her into a spider, hence condemning her to weave forever. Arachne’s name is still present in the etymology of the word “arachnid” (spider).

It is generally assumed that what triggered Athena’s wrath was finding out that the quality of Arachne’s work was superior to hers, which makes absolute sense in the context of the myth. It is also commonly assumed that the moral of the story is to never challenge the gods. Still, I find it interesting that whereas Athena chose to depict her fellow gods and goddesses as respectable entities focused on punishing the wrong-doings of arrogant humans, Arachne told the more bitter truth, rendering them as they were: bullies who took advantage of their position to constantly abuse and violate humans.

I like to think that the power of Arachne’s storytelling may well be the real cause of her punishment.

Ancient Greece was undoubtedly a very male-centered society, and yet, if we patiently unravel the thread of its myths, much female influence emerges. As such, weaving, an activity traditionally linked to women and often seen as passive, suddenly becomes, at least in ancient Greece, the epitome of power.

— This is the third of a ­series of columns on subject concerning facets of ancient history.