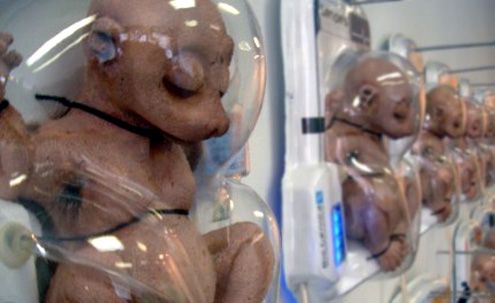 f dog is man’s best friend, then the Internet is a girl’s pet drug. It’s a fix. I must have it. And it’s well worth it.

Consider the high I got the other day when I found LifeGem, a website that offers “a certified, high-quality diamond created from the carbon of your loved one.” As in your cremated loved one. The process is simple: You ship the cremated remains to LifeGem’s Elkhorn, Indiana office. The remains are heated until the carbon is converted into a diamond, whose cut, color and setting you’ve already chosen.

I was intrigued. I easily imagined a LifeGem infomercial with two best friends gossiping over mocha lattes. Best Friend A notices a diamond ring on Best Friend B’s left hand.

“Whoa! A diamond ring? I thought Bobby was gay?”

“Wow, that is really sweet. I wish my dad would give me some bling.”

Bella looked up as me as I was pantomiming the infomercial in the bathroom mirror. Her eyes sparkled knowingly, making me wonder if my little dog could sparkle on my ring finger as well? According to LifeGem’s FAQs, yes, she could someday be a Precious Pets LifeGem ring, pendant or earrings.

For the past few years, pet trends have given me a creepy crawly feeling. Particularly the post mortem category in which a pet can be perpetually preserved in your favorite pose by traditional taxidermy or freeze drying. The rise of affordable technology has given way to more creative pet trends, like LifeGem, cloning and bioengineered pets.

In the spring of 2004, John Sperling, an American billionaire and octogenarian, financed Genetic Savings & Clone, a company that offered commercial gene banking and cloning for any animal. The price tag on a kitty clone was $32,000. Although there was some success (the first cloned kitty even had a litter of her own), demand was low. Genetic Savings & Clone closed in 2006. The Website, a splash page, has since pushed visitors to Viagen, an Austin, Texas-based gene banking company. For $1500, you can deposit your pets genes with CryoSure, a gene banking service that will hold on to your pets’ genes until Viagen or another company can clone them.

Though I prefer the idea of future years with Bella facsimiles over, say, a frozen foot-stopper of my favorite friend, I’m not yet banking on the idea. Looks can be cloned, but so far not personality. Bella’s “I only have eyes for Erica” attitude has taken five years of love and spoiling.

Perhaps the surest thing in the world of pet trends is uber-trendy GenPet. The “living, breathing, genetic animals” and bioengineered buddies arrived on the scene in 2005, shortly after the “Pet-as-accessory” craze that Paris Hilton ignited by popularizing the teacup-sized dog. Unknowingly, Hilton caused thousands of puppy mills across the globe to breed genetically defective mini-dogs whose presence is a must-have in pet stores and purses.

Bio-Genica’s GenPet is a safer bet. The hairless GenPet is a mixture of proteins from several different species. It has programmed personality traits and a built-in shelf life of either one or three years. Cuddly, homely, and hypoallergenic, the GenPet has you “covered on all bases.” You can choose your pet’s personality — “athletic and energetic” and “imaginative and spiritual” — and life span. Genpets hang on retail shelves while “in a chemically induced type of hibernation controlled by a protein in the packages’ nutrient supply tubes.”

Hours perusing GenPet Website for a European distributor yielded no results (I think it’s better to meet my future GenPet in person rather than opting for impersonal online ordering).

I did, however, come across another site that adds to my daily fix of Internet delights: Museum of Hoaxes.