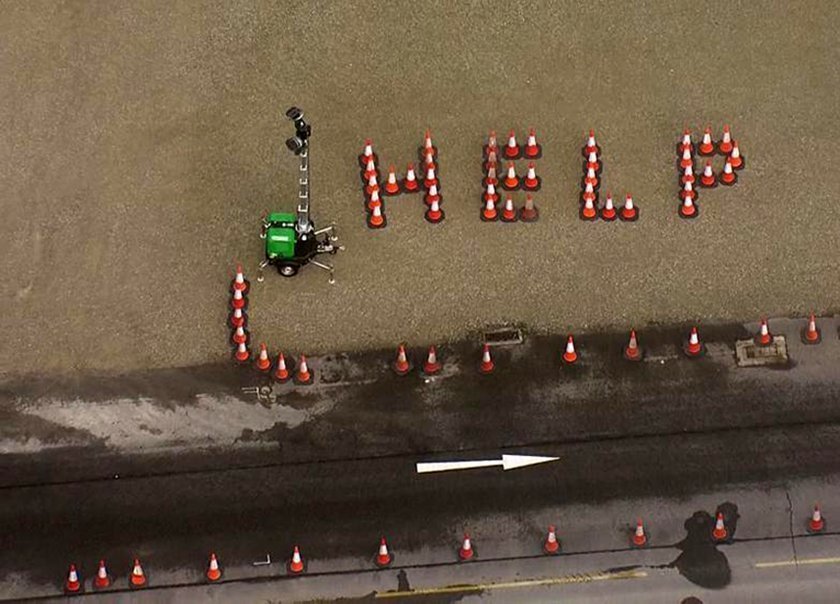 Stranded British truckers, barred from entering the EU when COVID tests failed to arrive, lined up to spell out their message.
T

he following account, while fictional, is based on two newspaper dispatches, one Frencch, another Polish. Details have been altered but the spirit of the dispatches, on the subject of random hotel and restaurant health inspections, remains intact.

They enter the hotel in four, three officers in uniform and a woman who wears an official blazer. They ask me to immediately stop what I am doing and to listen closely. They are searching for details and information. They have been authorized by the latest decree. They wish to know how many people are in the hotel.

From above, in descending order, December images taken in Rome, Paris, London, and Berlin.

I tell them only seven.

They then ask for the identities of these seven people and their provenance.

I say I cannot release this information but they immediately remind me of the decree. I must comply.

The woman and one officer stand before me while the other two say they are going to inspect the three floors as well as the kitchen and any closets.

I tell these two officers that no one is around. There is but a skeletal staff.

No matter, one replies. They know what they are looking for.

The female agent looks at the furniture in the lobby and asks several questions about who has been where, and what happened after, questions I find bewildering with only seven guests.

She asks if any of the guests have used glasses or teacups or cutlery of any kind.

I remind her we are at war. The dining hall is not open.

But is it cleaned and inspected, and am I sure no one can find their way into it.

Yes, I reply. I am sure. The door to the hall is locked.

Good, she says, reminding me of the penalty if this is not the case.

I tell her that because of the curfew, most guests dine in their room, their food ordered directly from the kitchen, which keeps strict hours, and the food itself brought to the doors of the guests and left there. The staff does not even knock.

But have any of the guests left after 8 p.m.?

Of course not, I reply. All are aware of the curfew. No one circulates. I see a woman from time to time reading a newspaper in the chair at the corner of the lobby.

Has this woman been checked? Is she in order? Have all procedures been followed?

Yes, yes, yes, I say swiftly. It’s just that she tires of being in the room and enjoys reading.

But have the books been checked and put through the proper tests, both the inside flap and the outside, and if it is a device, has it been bathed?

Yes. I tired of saying yes.

The female officer senses my discomfort and for the first time shows a bit of remorse.

We are just following the letter of the decree, she says. A restaurant I probably know, and she tells me the name, was closed because it attempted to serve outsiders outside the normal time, and with no permit. The owner was detained and fined. She wishes nothing of the sort to happen to me.

I thank her and say I have diligently followed all rules and even considered closing but then thought of my few guests: those unfamiliar with the city would have nowhere to go.

They should not be traveling, she tells me. In war, it is regulation, not whim, that matters, all the more so now, when the peril is so great and the opponent so crafty.

The two officers return from their rounds and ask a question about a broom closet on the second floor. They have found a mop and some sheets but nothing to suggest the use of detergents, a detail that troubles them.

I tell them the detergents are set aside at the end of the day, so they cannot be abused by rogues who would empty the supply.

Good, says the female officer, but at the same time detergent must always be present, along with collars and hygienic tissue. Otherwise a future inspection team might be compelled to issue a fine.

One of the officers laughs out loud, saying he found a cleaning closet at the airport completely empty, as if a room for a guest, with a faucet, and the rest of the airport empty as well.

The female officer does not laugh.

She wishes to know about the sources of juice and milk, have they been purchased from the state-licensed stores with the green protection seal.

Yes, of course, I tell her. My son goes weekly to get such supplies.

Only weekly? she says.

As often as is necessary, I say. We try to keep costs at a minimum. We are one of two hotels still open, as she no doubt knows.

She does not reply but under her breath says nothing should be open. Nothing. Decrees are not to be trifled with.

I must again have a look of sadness, of defeat, on my face, which I feel and have felt in recent times, and this must compel her to speak.

All we do, we do on the grounds of humanitarianism. Our goal is to help all and create the safest and most secure world possible. We wish no more than that and have no desire to cause upset for its own sake.

In other times, she continues, we could all ignore the present situation or make light of it or believe in a magic cure. Now, as I must know, no such cure is possible, so the checks must go on.

She asks if there are any animals on the premises.

I say no, and she yet again says good: they are not all safe and cause movement.

There are no such worries here, I insist.

She asks how the guests are doing, if any have shown signs of weakness.

I must be careful with this answer, I know. They might seize on anything.

Well, I say, almost cheerfully, no one complains that they don’t have a roof over their heads or a bed, even if the maid service has been suspended, as demanded by the decree.

I cannot and will not tell her that the mood of my guests is erratic, at once hopeful and sour, depressed that they no longer recognize much around them, let alone feel at home in the semi-vacant hotel.

The four officers prepare to leave, but before that the woman asks about the swimming pool.

It was long ago placed off limits, after the one-guest rule was eliminated.

But has it been checked? Has hygiene been applied? Has the tarpaulin been refreshed?

There is no such tarp but I take a risk, Yes. All has been checked.

The officers all nod and leave, the woman reminding me she will need the identity of the guests and their status for the next check.

I promise to comply.

They leave and I take a deep breath. I remember that last year at this time we had no vacant rooms and I was junior on the staff. I am now in charge by default.

I think of what the officer said about humanitarianism, and thank my lucky stars no one went so far as to ask me about the basement, where three adolescents live and eat and sleep. Mostly watching video games. They are illegal, I know, but they would be homeless otherwise. They are the children of parents in the neighborhood who ended their lives in this period.

They are my secret and my pledge to humanity, so I can remember the meaning of the word.