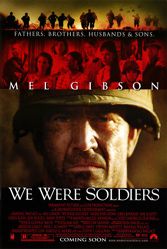 What distinguishes director Randall Wallace’s tale of battlefield decisions gone wrong from Ridley Scott’s more pyrotechnic “Black Hawk Down” is the way he personalizes lost-cause honor. Mel Gibson plays Lieutenant Col. Hal Moore who in 1965 led the First Battalion of the Seventh Cavalry (once Custer’s command) into Vietnam’s Drang Valley, known as the “Valley of Death.” Moore acted against his better judgment. As he predicted (the brass didn’t listen), his troops were ambushed and picked apart.

Wallace bases his film on a book by journalist Joe Galloway (played by Barry Pepper) who survived the battle. Moore (a Harvard man) and his tough no. 2, Sergeant-Major Plumley (Sam Elliott), are skeptical patriots who do their duty. To his credit, Wallace also includes the Viet Cong commander who plays a cat-and-mouse game with Moore’s outmanned troops from a tunnel bunker.

A good war film balances portrayals of madness against entertainment’s desire to leech on the adrenalin of male camaraderie. Wallace at least attaches smart and cynical faces to these good dogs of war.