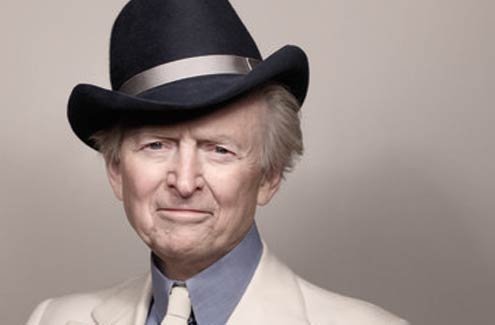 Back to Blood revels in the American Dream gone sour in Miami, where greed and sex take no prisoners.
R

ace-rifted Miami is the extravagant backdrop for Tom Wolfe’s “Back to Blood,” the fourth novel in the “New Journalism” genre he (maybe) invented half-a-century ago. TW again shafts the American Dream, ferociously ridiculing the country’s upwardly mobile aspirations, as well as its politics and greed. Add to that list whatever Wolfe views as corruptly “modern” — in this case art, psychiatry, the news media, and cash-driven social class.

Wolfe is in full attack mode. His 777 (!) pages provide a deafening package of inner and direct dialogue that comes out in sound blasts. This, for him, is over-the-top “Mee-AH-mee.”

Despite the noisy prose, Wolfe quietly gives readers a key actor and top voice, its gold standard. He’s police officer Nestor Camacho, a second-gen Cuban-American from the all-C Hialeah “ghetto.” He made it off the streets and into the cop shop. And that’s enough for Nestor. No plans to exit his neighborhood, or make millions. In this, he’s a pure archetype of America’s all-time favorite hero: heart of gold, honest, slightly bumbling. Modestly ambitious. Here’s a guy who can’t recognize the flawed, surreal hopes and fractious hatreds that trouble his fellow cast.

For if this town is violent, and porn-iferous, its rainbow-hued population does share two huge goals, both of them the all too probable outcomes of the American Dream. No. 1 is upward mobility, often without limits. No. 2 is unswerving identity by blood, thin in a city drowning in racial variety. The survival trope is clear: “In this world there’s nothing left to believe in… except the bloodlines that course through our very bodies, to unite us.”

Nestor forgets that most other Miamians don’t just observe these two rules, they swear by them maniacally.

As Wolfe’s secondary narrative voice, Magdalena’s take on the American Dream is light years ahead of Nestor’s. Gorgeous, and hot, she’s learned it’s not her nursing skills that link her to wealthy men. She’s our guide to the extravagance of Miami’s riches, vice, and crime.

Given his own limitations, Nestor never really got Dr. Norman greed-is-good angle and Magdalena’s role in it. He thinks she’s moved in with a girlfriend.

While Nestor fumbles over his romantic conundrum, he’s ordered to a major bridge. His task: save a schooner stowaway (Cuban) who’s clambered up a 60-foot mast and is now stuck. Gawking crowds and halting cars snarl bridge traffic. Nestor’s told to “climb that mast and get him down.”

But why is the crowd on the bridge calling Nestor a “Traitor”? Because the Cuban crowd there expects him to help the bloodline: i.e. get the Cuban to land, and to visa status. Good cop, Nestor brings him to the police schooner — and extradition. Miami’s Cuban population and media label him traitor. His father evicts him. All he’s got left is the “heaven” of being “a real cop.”

Let’s say TW wants to show how down, dirty and volatile the town can get. No place for dreamers. To prove it, he’ll eventually drop both Nestor and Magdalena off the wheel of fortune.

You-Tubed as he busts a black, crack dealer house, Nestor (wrongly) appears as racist. He’s dumped from the force. Magdalena is also out of job and home. She dumped Norman for Sergei. Who quickly exits her bed, and the country, after his art fraud is exposed.

Pre-novel, TW made an “investigative journalism” visit to Miami to check out his Am-Dream coordinates. Unhappily, all his “insider” info is available to anyone who reads a newspaper or watches TV. It’s no surprise that Miami has a 10 percent white minority, with blacks and Cubans running government and police, or that there’s constant race tension that lap over into war.

Bottom line? Wolfe’s Miami is just one more target in a career-long argument that the Am-Dream is the sum of false illusions. What’s new is the locale: a brawling, sprawling city, whose dollars and demographics help drive a fast-paced tale.