“We are pleasantly reminded…” 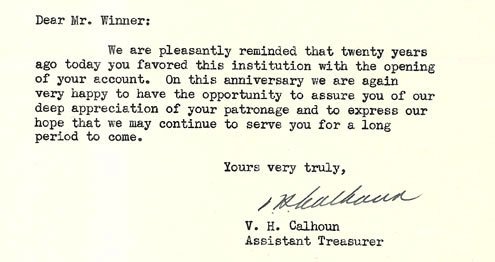 Letter from a Chase Manhattan Bank official to mark a 20-year anniversary.
C

ustomer service and human resources are now staples of the commercial and employment workplace. They have institutionalized a culture of manufactured greetings and sales pitches as well as helped to buttress office etiquette that was previously governed only by good sense, education and personal sensibility.

Both operations are fairly new, dating from the middle of the 20th-century, and prototypically American (the polite UK was less active in this regard, hindered by the sweep of its class system). The saying, “The customer is always right,” though rooted in the 19th-century European hotel trade, was adopted, promoted and finessed by pioneering American department store retailers including Marshall Field and John Wanamaker.

But before retail businesses turned relationships with customers into a stylized ritual, it was up to individual establishments to cultivate their ties to customers, whatever their standing. This was often left up to employees of the institution themselves, who were tasked with checking on customer history and loyalty to then forward the information to more senior members (just as editors and professors, before admissions committees, were charged with weighing candidates to join newspapers and attend colleges).

The “loyalty” letter on this page is a good example of a now-dead (or now-automated) link between establishment and customer — in this case between a bank and its client. It reflects the more intimate ethics of slower, personalized workplace in which transactions were often conducted face-to-face, in a restaurant-like way, and both stores and banks came to know their regular customers.

While such an ethic persists in smaller towns the world over, it has all but disappeared in cities, where employee turnover makes it not only impractical but also improbable.

What distinguishes this brief but tailored 1957 note from a Chase Manhattan Bank New York central branch official to a longtime account holder is that the client had extremely modest total bank holdings at the time, less than $500. That fact, however, failed to deter a thank-you note that some highbrow institutions once considered the backbone of common courtesy — a widely used phrase that has since fallen from grace.

The account mentioned in the letter was opened in 1937 and would remain active for another 27 years, until the death of its holder.

We are pleasantly reminded that twenty years ago today you favored this institution with the opening of your account. On this anniversary we are again very happy to have the opportunity to assure you of our deep appreciation of your patronage and to express our hope that we may continue to serve you for a long period to come.