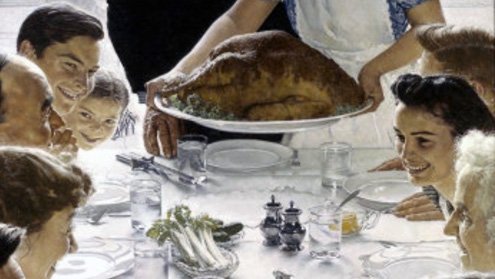 hile on holiday in the United States, I enjoyed time with my children, watched interesting films and lectures, and got in some great skiing. But what stood out was time spent at the table with several generations of families and friends. I listened to a 96-year-old who’d escaped the Gestapo on skis, to college students just back from abroad, to 14 year-olds who’d never left home. The stories were funny and tragic. We shared laughter. We compared new and old slang. We enjoyed the many perspectives brought by people of different ages and origins.

The topics weren’t always light. We argued about domestic abuse and the rising use of heroin in New England. We aired inevitable differences about the candidates running for the U.S. presidency. Some conversations weren’t easy. But the difficulties didn’t arise from touchy subjects or strong disagreements

The hardest dinners I had included children whose parents viewed their offspring as oracular, household gods. Spoiled by reverential parents awed by their words, these young people often embarked on exhaustive speeches that eventually left awkward silences when they finished. They failed to notice when listeners lost interest. Interruptions flummoxed them and disagreements made them pout. Their contributions were like stump speeches composed to settle a point rather than fuel further discussion. Constantly approved of by their parents, they were unprepared and even offended by friendly challenges.

High intelligence made little difference. Many were surprisingly slow on their feet. They expected optimum joke telling conditions from their listeners — theatrical silence — but were always a beat behind on the quips. Unused to good-natured contradiction, they seemed to take dispute as a personal value judgment rather than another perspective.

These young people wouldn’t have lasted long at my own family’s table. We children were treated like adults. While it was a privilege to join adult conversation, being on equal footing could also be painful. It hurt when adult fact checkers howled when I insisted that walrus tusks were 14-to-16 feet (not inches!) long or that Jackalopes really existed. Sloppy reasoning was swiftly dismantled. Rambling jokes sank ignominiously when more nimble speakers grabbed the microphone.

There was a tacit understanding that conversation was like a game. If you played, you had to keep the ball in the air. If you were fast and skillful, it could become a round robin and you got to enter and exit the other roundtable conversations at will. You were also expected be like a good jazz musician whose riff provided a hook for the next person to grab.

Recent studies have dryly linked shared family meals to better eating habits, lower rates of depression and academic and professional success. But many of these studies struggle to distinguish between the characteristics of families who share meals — higher socio-economic levels and stable households — and the actual impact of sharing a meal. Both the studies and the ambitious parents of the Ivy League children I dined with seemed to focus only on limited and quantifiable benefits.

Food and wine soften disagreements. Sitting at a table flattens hierarchies and age differences. Learning to be a good guest means knowing disagreements are not cause for loss of respect. Accepting and understanding the unfamiliar or hostile is easier around a table. No wonder that meals shared with guests have been hallowed throughout history and across cultures.

Statistics-based American studies can miss so much. Dining with my parents and their friends brought me a lot more than improved eating habits or heightened defenses against depression. My father’s storytelling gifts enlivened history. He spoke of Depression-era Detroit when he drove a milk truck at age 14 (delivering to a fugitive named Leon Trotsky, or so he claimed). He talked about World War II and Vietnam during the 1968 Tet Offensive. I sharpened my arguments with my parents’ lawyer and professor friends. The 1960s brought many opportunities for learning how to defuse the histrionics of adults who’d had a few too many. Along the way, I acquired a bit of humility and learned to feel comfortable with people of many generations and backgrounds. When I moved to Italy, the hours spent around a table with no discernible purpose helped me fit in and find friends quickly.

The surveys and the awkward American children missed one important thing; the same thing overlooked by foodies always striving for the next hot thing or wine aficionados eager to give point scores to wines. They all forget that the important part of it all is pleasure — shared.