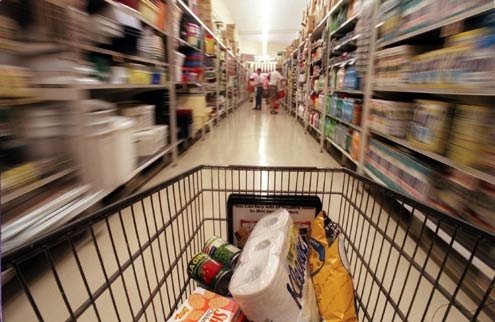 American aisles can give you an anxiety attack.
E

very time I go home to Miami, I go into shock. It’s usually in amazement over how things have changed since my previous visit. During my 2007 trip, for example, I was overwhelmed by the abudance of choice. By that I mean the selection and variety just, well… stuff.

When my mom asked to please get some chips and soda in my local supermarket, a simple walk through the aisles nearly gave me an anxiety attack. After being away for nearly a year, even the chip aisle can induce panic.

For starters, my grocery store dedicates an entire aisle to chips. The chip aisle.

Okay then. Once you’re there, you not only have to decide which brand you want but how you want them packaged.

In Rome, I’m lucky to find three shelves dedicated to chips. I was actually pleasantly surprised lately when I noticed Uncle Ben’s tortilla chips in my supermercato. Weren’t they the rice guys? Who knew.

This trip, I was hit by niceness.

From the moment my plane touched down in Philadelphia, my first stop, it was all good morning, good evening, please and thank you.

My American expat friends in Rome argue that this is especially true when people work in the service industry and off commissions and tips. The niceties can feel forced and slightly fake.

This may be true in general terms but, believe it or not, even people who weren’t making money off me were pleasant. During my layover at Philly, I was reading through bridal magazine when a nice middle-aged man asked me if I was planning a wedding. He had no reason or excuse to talk to me, nor did I feel like he was a vicido, or pervert, trying to get my phone number — something I’ve felt often in Italy.

No. This was simply just a nice man interested in striking up a simple conversation before boarding his flight. When his flight was called, he left.

Not to be denied, other strangers jumped in to take his place. They cheerfully told me all about their vacation in the Dominican Republic.

There was more niceness on the plane. Good-hearted people gave up their seat to women who wanted to sit near children or family members.

A Rome-dwelling skeptic, I was convinced I would change my mind about all this good feeling once I got to Miami. I grew up in Miami and love it. But it’s riddled with contradictions.

One morning, I took my dogs out for a walk, and everyone I met greeted me. Such politeness! Had even Miami changed? I wondered.

Later that day, as I drove to the supermarket, some man kept honking at me at the stop sign. For a split second, I thought, do I know him? Is he trying to say hi to me? The next thing I knew, he rolled down his window and shot me the finger. I’d spent too much time idling.

At least some things do stay the same.