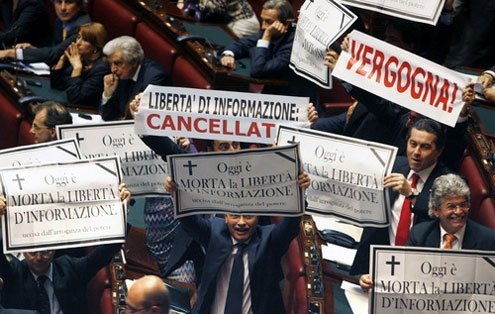 elationships, observes novelist Philip Roth, are “instinctively strategic.” So is Italy, which is a tangle of them. Afloat in a Saragossa Sea of caprice, Italy immobilizes change by howling at it. The volume is paralyzing.

A microscopic case in point comes from a recent lower house vote approving the privatizing of the state-run water industry. The nation’s most accomplished daily, Corriere della Sera, reported the outcome under a headline that read: “Brawl in the House: The decree to privatize water passes.”

The rest, to all but the most inside of insiders, was gobbledygook.

“The ‘Avoid-EU-Penalties’ decree containing much-opposed norms regarding the privatization of water is now law. It was approved 302-263. The vote sparked a row in the chamber.

“The 25 members of the Italy of Values Party (IVP) began waving poster portraying ‘dehydrated’ Italy with the inscription: ‘Hands off the water.’ Chamber President Gianfranco Fini immediately called on the lawmakers to ‘put away their posters,’ whereupon majority delegates began shouting ‘Idiots, idiots,’ at IVP members, one of whose members shouted back: ‘We kiss your hands, Don Silvio.’

“Noting that the decree helped ‘only the prime minister and his friends,’ [IDV chief Antonio] Di Pietro said he would seek a referendum against the decision. Calling for an abbreviation in the amount of time it’s taking to prosecute [Prime Minister Silvio Berlusconi, who recently lost his legal immunity; my note], Di Pietro said: ‘I want a prime minister who does not commit crimes, not a prime minister doesn’t allow himself to be prosecuted.’ As a result, he called for a December 5 protest ‘also directed against the drift toward privatization.'”

In a nutshell, this otherwise incomprehensible dispatch means that the Berlusconi majority — partly to comply with European Union guidelines, partly to generate new business opportunities — has voted to sell off its fantastically outdated sewage and filtrations plants to private bidders, putting existing contracts to some 252 state-fed companies in harm’s way.

That’s some €2.5 billion in contracts eventually up for grabs, which from the point of view of critics, 1. Trims sinecure-like state jobs, 2. Takes often-efficient township government out of the water-furnishing equation, and 3. Leaves Berlusconi in the driver’s seat to help out corporate friends (implicitly opening the door organized crime, which, for example, all but runs Naples’ utilities network).

Defenders of the measure note that the current state-run water system leaves between 15 and 30 percent of the population with inadequate sewage and water treatment facilities. Italy’s annual water costs are in fact among the lowest in the world. For quality to rise, so do prices.

While the debate is real enough, its urban portrayal is discontinuous and ideological, remote from civics or public trust. As always, most citizens have no comprehensive insight into what they stand to gain or lose.

Aside from threatened job losses, which is at the quaking center of all privatizing maneuvers, debate itself occurs mostly in the dark, often acquiring form only years later, when a trigger issue — uncollected Naples garbage, say — brings the matter briefly to the public and media forefront. Then, national and international attention erupts. Italy is again discovered as complicit in its own finger-pointing mediocrity, until the latest storm passes.

It’s not so much that Italy dislikes transparency, the in-vogue term for public sector integrity and accountability, but that enduring social and educational peculiarities prevent an even-par dialogue between government and governed. Aside from election campaigns, the two are disconnected. And even in most voting ideology prevails over issues.

When it comes to a substantive, concrete issue, in this case the fate of the country’s water system, parliamentary mud-slinging takes the place of details that most chroniclers, even journalists, consider either too arcane to explain or too charged to risk the wrath of benefactors. The estranged public is addressed emotionally, outside civics, with agit-prop condescension. Heckling is fun and easy.

In the 1970s, my social activist mother tried to find out how many of her well-off friends knew the central precepts of the Italian constitution. By that she meant their rights. The answer was a Bret Easton Ellis less than zero. Of the below-zeros many nonetheless had political views, though most were raw and conspiracy-heavy.

She obtained copies of the American Constitution, which the U.S. Embassy then published in Italian as an international public service. Many returned to her impressed by so many simple, declarative sentences. Ah, they sighed, if only Italy could speak that way.

On paper it can. But instinct and strategy inevitably get in the way.

A decade into the 21st century, Italy still habitually subordinates affirmation and clarity of purpose to “in God’s hands” submissiveness and the urge to trivialize — è soltanto un dettaglio/minor point; chi te lo fa fare?/why bother?; che ti frega?/what’s it matter to you? It’s the shrewdly poisoned water of choice.