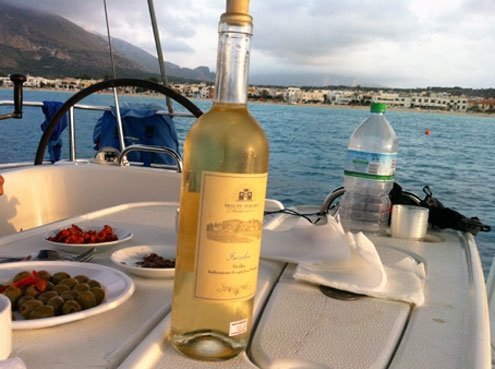 alt on your skin, wind in your face, and blue water in every direction. That’s what you most feel during a week of sailing off the Sicilian coast. Since my friends were all Italian, onboard life revolved around meals, each one accompanied by crisp, summer Sicilian whites.

Setting out from Palermo, headed for Trapani, we cruised along the rugged coast beside barren green-gray mountains and craggy cliffs that at times reached to the water’s edge. After a midday swim, with the light wind carrying us silently forward, Stefania prepared penne with fresh zucchini, garlic, lemon, parsley and Parmesan.

As we ate and sipped a fresh and easy white wine, La Segreta Bianco IGT 2009 (12.5 percent alcohol), produced by Planeta, a thriving company with vineyards located in four parts of Sicily. At €8, La Segreta Bianco is among Planeta’s most accessible wines. It’s made near Menfi, south of Palermo, mostly from grecanico (50 percent) and chardonnay (30 percent).

By dinnertime, we’d reached the beach town of San Vito Lo Capo, where we anchored. At a distance the bright umbrellas along the white strip of sand reminded me of an impressionist painting in the waning light of the afternoon. All five of us crammed into a tiny dinghy headed for the port.

After a walk around the vacationer-packed town and a visit to the fortified, 15th-century church, we dined at a restaurant with a table facing the beach. Because of the enduring Arab influence, cous cous is the local specialty. We shared bowls of it along with plates of fried and grilled calamari, pesce crudo (raw shrimp, tuna, and a delicate white fish), and pantelle (a sort of pancake made from chick peas).

Pietro recommended one of his favorite wines, Colomba Platino IGT 2009 (€8, 12.5 percent alcohol), made by Duca di Salaparuta with inzolia, the oldest native grape of Sicily, probably brought to the island by the ancient Phoenicians. It’s simplicity, acidity and slight saltiness suited the meal perfectly. (Duca di Salaparuta sells a wide range of wines among the 10 million bottles it produces annually).

The next day, we sailed to Levanzo, the smallest of the three Egadi Islands. We anchored in astonishingly bright blue water and I dove in. It wasn’t always so serene. In 214 BC, Roman galleys hid in the bay to ambush the larger Carthaginian fleet in what ended up as the decisive battle of the First Punic War.

The next day, our friend and skipper Giorgio sailed to the larger Egadi island of Favignana, known for its tonnara, or tuna processing plant, where in the 19th-century the entrepreneurial Florio family produced the first-ever tuna canned in olive oil. We toured the island on bikes, passing quarries where limestone was mined and used to anchor the tuna nets. When the midday heat stopped us, we swam in the cool, bright green water of the Cala Rossa.

Atlantic over-fishing has decimated the tuna population and shut down the tonnara, but some stalwart fisherman still forage for tuna. At a beach restaurant by the port, we ate some of most tender and delicate I’ve ever tasted, accompanied by Angimbe’ IGT 2009 (€7) produced by Cusumano, a company located near Palermo. The wine is inzolia (70 percent) and chardonnay (30 percent) and is vinified in steel vats with no oak. It is clean, fresh, with a slight citrus flavor (13 percent).

We also tried Sant’Agostino IGT 2009 (€15), vinified partly in barriques and made by Firriato near Trapani with cattarato (50 percent) and chardonnay (50 percent). It has a darker color, greater structure, with flavors of peach and mango (13.5 percent).

The calm seas turned turbulent on our last evening, a brisk wind pushing occasional grey clouds across the skies. Alessandra prepared a sumptuous salade niçoise followed by cheese and fruit. I opened two different bottles, both by Tenute Mokarta, a family wine producer in the mountaintop town of Salemi overlooking the sea near Trapani. The first, Inzolia IGT 2010 — 100 percent inzolia, €10, 12 percent — was lighter and more acidic than the second, Talia IGT 2009 — 100 percent grillo, €10, 13.5 percent — which has exotic fruit flavors and is a denser and more structured wine.

Both wind and waves were decidedly against as we headed back to Palermo the next day. Giorgio valiantly fought the sea gods with assistance from Pietro, but with the boat banging around, we managed only a Spartan lunch of cut carrots and sandwiches — not a bottle of wine in sight