Watching for a wink 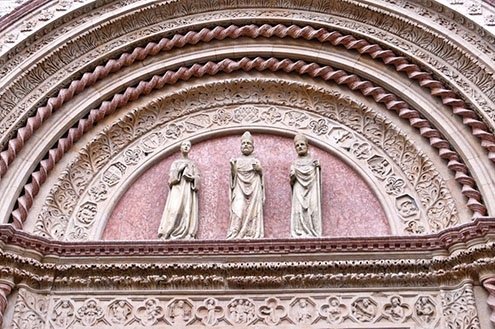 vil doesn’t stand a chance in my hometown of Perugia. We have not one but three patron saints to protect us. Meet San Lorenzo, San ‘Ercolano and San Costanzo.

Most famous is San Lorenzo. A martyr and one of Rome’s Seven Deacons, early protectors of Christianity, he’s the patron of some 200 towns throughout Italy. Legend has it that Roman Emperor Valerian condemned him to the cruelest of deaths in 258 AD, chaining him in irons and grilling him alive over a slow flame.

San Ercolano and San Costanzo, both bishops of Perugia at about the same time, endured more traditional martyrdom: they were beheaded. Clearly, humanity hasn’t learned much in the intervening centuries, since belonging to the “wrong” religion can still be cause for persecution.

The cheering side to this story naturally involves food. San Costanzo – whose name day is January 29 – is believed to have the ability to predict marriages. In the Church of San Costanzo in Perugia, an image in his likeness is the 19th-centurty altar’s centerpiece feature.

If an engaged couple enters the church on his feast day and the saint chooses to wink at the young woman (which only she can can see), the couple will marry within the year. If there’s no wink, the woman’s fiancé is expected to do the honors, giving his beloved a ring-shaped sweet bread flavored with aniseed and filled with nuts and dried fruit. This sweet bread, torcolo di San Costanzo, is an enduring symbol of Perugia’s rustic cuisine.

During San Costanzo’s feast day, which still includes a fair and a nighttime procession, Perugia is awash in freshly baked torcolo and its beautifully permeating smell of sugar and spices. Every home has a torcolo to dunk in a cup of tea or (better still) Vinsanto. It’s a joint celebration of the saint, and, with luck, an augury for a happy marriage ahead.

The result should be bread that lovingly melts in your mouth. Offer someone a slice and you might just get a wink in return.

— Combine the different flour and yeast in food processor bowl or stand mixer. Stir in the water a little at a time until the dough forms into a firm ball. How much water you need depends on the strength of the flour. Stronger flour requires more water to form the ball. Alternatively, mix ingredients by hand in a large bowl, then turn the dough out onto a lightly floured surface and knead, adding more flour if necessary, until smooth and elastic, about 10 minutes.

— Transfer in an oiled bowl, cover and keep in a warm area of the kitchen until doubled in volume, 1 1/2 to 2 hours. If it’s cold and humid, I prepare the dough the day before and allow it to rise overnight.

— Dissolve the brown sugar and salt in a small amount of water. Bring the butter to room temperature. Dice the candied citron, orange peel and nuts, then mix with the aniseed and one or two tablespoon of water (limoncello or brandy are other options).

— Move the raised dough into the mixer and add the olive oil and butter. Mix until well blended. Add the aniseed-fruit mixture and stir. Alternatively, proceed by hand. Transfer back into an oiled bowl, cover and let it rise again 3-4 hours.

— Roll the dough into a log, twist it then pinch it gently into a ring.

— Line a cookie sheet with parchment paper and arrange the bread on the paper. Let the dough rise in warm draft-free area until almost doubled in volume, 45 to 60 minutes. Whisk the egg and use it to brush the bread.

—Preheat oven to 180C (375F). Bake the bread until the top is golden, about 45 minutes. Serve at room temperature and watch for winks.