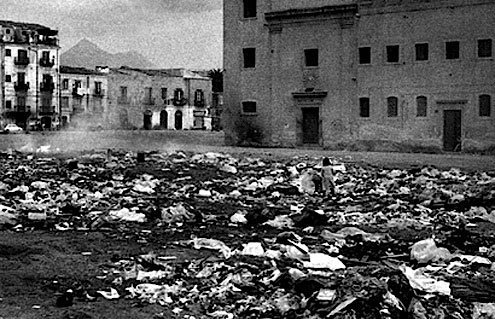 Piazza Magione in Palermo, circa 1950; before systematic refuse collection, garbage was dumped and burned. Photo by Nico Bastone.
I

was bludgeoned into going to a renewable energy exhibition the other day where an enthusiastic but intense teenage schoolgirl lectured me on the need to recycle my rubbish. I couldn’t help smiling to myself as she earnestly held forth, pinioning me to a wall chart which pointed out the benefits of processing waste in a responsible manner, and the dreadful consequences to the planet should we fail to do so.

She is quite right of course, and I am delighted that Italian schools are doing something to instill an ecological conscience in their pupils (even though it cost me a quick €10 for a T-shirt and a rather sanctimonious CD-Rom).

But I can’t help feeling a certain irony in that the Comune di Spoleto — the very same one that runs the school which put on this high-minded exhibition — has not yet managed to get itself together to provide recycling bins for its residents. When I moved here three years ago I was full of good intentions about separating all the household waste and putting it in the right bins. Those noble plans dissolved into thin air when I discovered it would involve schlepping half-a-kilometer with all my rubbish bundled up like a bag lady. Now, I shove it all in a black bin liner just like everyone else and dump it in the container near my apartment.

Strangely, the local city council spends huge amounts of money employing road sweepers to clear up every last cigarette butt and sends out an army of greener-than-thou electric eco-vehicles to wash and scrub the streets at an annoyingly early hour each morning, right under my bedroom window. Recycling is clearly a bridge too far.

Like so many things, the service you get depends on where you live, and at a weekend house we have not 15 kilometers from here, it’s quite a different picture. Our house is outside a tiny hill village, home to about fifteen families, almost all of them contadini for whom, it must be said, the future of the planet is not exactly a pressing concern. Yet they are spoilt for choice when it comes to throwing out refuse as within a half-kilometer radius there are no fewer than four separate groups of recycling containers. The bins are emptied with clockwork precision and each house is regularly issued with free color-coded (plastic!) bags. The whole exercise must cost a bomb.

Sadly, it is also a complete waste of both time and money, as no one takes a blind bit of notice of which container is for what. I don’t usually make a habit of peering into bins, but out of curiosity, I check these ones every time I chuck out my own rubbish — and without fail I find glass bottles dumped in the bin for plastic and plastic plates and detergent containers thrown in the ones for paper.

Still, that has to be a distinct improvement on the time-honored method of refuse disposal favored for many years around these parts and still used by some people — flinging the entire contents of your bin into a hedge or a grass verge. It never fails to amaze me the lengths that some people will go to in order to sling their waste and unwanted household objects into places they shouldn’t.

Out riding my horse, I go to some pretty far-flung parts of the Umbrian countryside and on the most remote trail or forest, sooner or later the chances are I will come across a rusted old fridge, a bike, a sofa or two, and sometimes even an old car.

But spare a thought for the man I saw interviewed on Italian television last week, who lives in Aversa, near Naples. He’s just received a bill for €270 for eight months’ rubbish collection. Yet the view from his apartment is of one giant stinking garbage pile. No one has collected it for almost a year.

In Rwanda, on the other hand, rubbish disposal, and the protection of the environment, appears to be a burning issue, even though you’d have thought the government might have other things on its mind. A journalist friend of mine went there recently and was surprised to find her suitcases being carefully searched at the airport. The uniformed officers who conducted the painstaking exercise weren’t looking for drugs or even alcohol. Instead, they were searching for — plastic bags, now declared illegal in Rwanda for environmental reasons.

In the capital of Kigali, police are stopping plastic-bag users in the street. You face a whopping great fine if you’re caught carrying your shopping home in one. Some supermarkets have been closed down for flouting the ban. I wonder how that idea would go down in Italy.