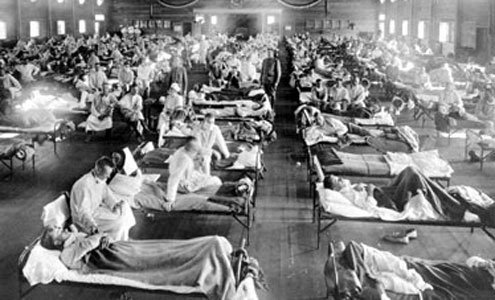 The Spanish flu, known as "La Gripe Española" or "La Pesadilla": The root of all fears.
B

efore feudalism relinquished its superstitious sway over urban Italy, the word cancer was unutterable. Obituaries spoke medievally of una malattie oscura, a “dark disease.” Announcing cancer invaded privacy; it was an admission of rape by sickness. Specifying the incurable intruded on the unsavory details of mortality that the Catholic day-to-day preferred to confine to whispers.

Doctors often withheld bleak diagnoses not only from terminally ill patients but also from wives and younger family members. Let downturns speak for themselves. Not talking death to the dying was charity. After which rite-bearing priests appeared to formally square life’s circle.

Such behavior is largely antique. The United States has made informed censorship a synonym for malpractice. Most Western and northern nations swear by comprehensive diagnoses. Attracted to privacy, Italy still maintains a peculiar rapport with illness. The prospect of disease both frightens and excites, its threatening contours nourishing a fascination once confined to prurience.

The latest example is swine flu, which thanks to preventive marketing — some of it useful, some gratuitous — has expanded into a malingering angel. Funerals of early victims are written up as harbingers.

Make no mistake: People will get sick. Some will die. Flu seasons, light or heavy, are nasty byways.

But the role-out of a pandemic in the information age produces contradiction and outright paradox. Its pre-illness stage generates an anticipatory anxiety as palpable as contagion. The susceptible fret about ailments they don’t have. They borrow from a sickly future to further secure their worried place in an edgy present.

Balancing the need for information against the risk of panic, authorities have wisely decided to shoot first. People listen to warnings. More than ever, warnings help give life its meaning.

What the warning cycle doesn’t account for, particularly in chatty places where medicine still abuts superstition, are the risks of alarm itself, and the despondence within it. Previewing menace manufactures an addictive malady that leads to collective public leakage. The adjusted fear a world run amok, the depressed are literally consumed (once a euphemistic noun — “consumption” — used to avoid describing the specific effects of tuberculosis).

The Italian media borrows from its breathless American counterparts, who since September 11 have used actual or impending calamity to support a branch of distracting and entertaining pop culture. Not long ago The Washington Post published a story written by a fearful mother subtitled “During the swine flu season, think before you share a drink with someone” (“How many micron-sized drops of infected saliva had backwashed into my glass?” she wrote at one point; how many indeed?). Children are low on antibodies, putting them most at risk. One American report has already predicted 90,000 dead by spring. The message is, “Be aware, don’t share.”

“Saliva drops,” an ANSA news agency dispatch pointed out recently, stating the obvious in the most nefarious possible terms, “are transmitted not only through coughing but through speaking and breathing.” Though Italians might discipline themselves to speak less, a breathing stoppage drop isn’t in the cards.

Though there’s nothing comic about serious illness, the old-school approach to terminal cancer offers insight into an alternative approach. White lies were intended mostly to cushion mortality’s starkness. Doctors reasoned that more alarm merely spread dread, to both the dying and their watchers.

The swine flu long ago navigated past the point of alarm. It is now detail-oriented and dread-fueled. It’s a hit.

Some three million Italians may be in bed over Christmas, reports a leading Rome newspaper. Schools may be closed to limit the spread of the virus. TV commercials will soon be aired to provide outbreak updates. European Union health ministers will meet in Brussels in October.

Even the not-yet-ready vaccine is in harm’s way. There may not be enough. It may kill some of those use it. Most vaccines do, since they contain strains of the virus they’re intended to prevent. Moreover, most of the West’s population is over-immunized, its antibodies AWOL. None of this is surprising or unexpected. Little about the virus is, except perhaps its potential scope.

What has changed instead is the way warning delivery systems feed the restless qualms of the modern mind, spreading the latest standard-bearing menace from which no one can or should relax, making some people sick with that which they don’t yet have.