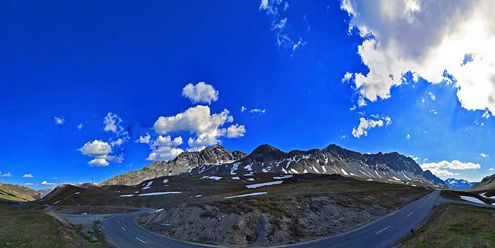 The Albula Pass.
I

t was summer and Milan was baking under the relentless summer sun. My husband, Dan, had another two weeks before he could get away for vacation. But, dammit, I couldn’t stand it any longer: the perpetually sweat-soaked clothing, the street noise from windows opened in hopes of catching a breeze, waiting for a tram in the meager shade of a sign (and sharing that shade with at least one other person) — estate is not my favorite season.

The Swiss border is only about 50 kilometers from the center of Milan, making it perfect for a weekend getaway. We had never been to the ski resort of St. Moritz. Pictures of her snowy slopes certainly were appealing, as I felt another drop of sweat roll down my back and join the pool below. I immediately bought tickets, made a hotel reservation and packed my backpack. Dan, ever-ready for a new adventure, was pleased.

The train from Milan passes to the east of Lake Como and goes right up the center of the Valtellina valley, heart of some of Lombardy’s best wine and cheese country. At Tirano we stopped to buy bread for our “movable feast” and boarded a Swiss train. Once settled, we popped open the wine and had a lunch of cheese and olives.

The train began a serpentine course up one of the hills bordering the valley. The twisting tracks required the train to proceed slowly — meno male! The scenery wasn’t something to be rushed through. At one point the train climbed a spiral trestle, gaining altitude in a short distance.

Agricultural land gave way to flower-covered, butterfly-fluttered meadows. I felt the tension ooze out of my pores, evaporating away. It wasn’t just the wine. The mountain scenery was a tonic I had been desperately needing. With our ascent, the temperature descended to the mid-twenties (Celsius), and I soon forgot that oven called Milan.

Before long, the tracks leveled as we came to Lake Poschiavo. It was the milky-green color of my mom’s jade ring. As the train snuck and rumbled along the lakeshore, we saw family picnics and couples, young and old, walking hand-in-hand or sitting on benches enjoying the view of mountains reflected in the water’s surface.

At the far end of the lake, the train began winding and climbing anew. The water below played peek-a-boo through trees and turns as the train mounted toward the peaks. Rounding a bend, we caught a glimpse of a glacier. All the passengers gasped and exclaimed in various languages. The train entered a tunnel as everyone scrambled for cameras. As we left, the glacier posed grandly for us: hundreds of acres of it, with no less than four waterfalls emptying into a smaller lake. This lake was also jade-colored. Dan, being a scientist, informed me: “The water is that color because of dissolved limestone.”

The train continued climbing until it reached the Bernina Pass at the Diavolezza ski area. Piz Bernina stood majestically before us as we paused to allow an oncoming train to pass. Several hikers were climbing Bernina Peak, and more got off our train to join them. We were content to shoot pictures from the train and let others conquer the mountain.

The train began a descent into the Bernina Valley, which was no less scenic. Our approach into St. Moritz took us by its lovely lakeshore. here were several sailboats gliding on the green waters.

We checked into the hotel and found that our room overlooked the lake, though I hadn’t thought to request a view. Once settled in, we headed for the funicular railway. I wanted to get a picture of the lake from above. We had a lovely, clear day to do it, but the sun sets early in mountain valleys, so no time to dilly-dally.

The walk to the funicular took us past several upscale and designer shops — the only thing that whole weekend to remind me of Milan. I was surprised to see that the there were few people on the funicular. Presumably shopping and sailing are bigger summertime draws than the mountains. I watched as the town shrank and the lake beyond seemed to grow. St. Moritz is a very charming little city, especially viewed from above.

After taking several pictures from the Corviglia Rifugio, we enjoyed a local beer (Calanda Brau), and took the last train back down. The next morning as we packed for our return, we saw several racing shells skimming on the surface of the lake like water bugs. It turned out that there was a race set for later that day.

Though I wasn’t eager to return to the Milan furnace, I’d gotten the break I so desperately needed — and dozens of great photos in the bargain.

You can get from Milan to Tirano by train from the Central Station. The trip takes about two-and-a-half hours. Traveling by car, take the SS36 from Lecco to Tirano*. At Tirano, take the Bernina Express to St. Moritz. This takes about the same amount of time as the train ride. Since travel will take mich of the day, pack a picnic lunch. Or snack in Tirano.

St. Moritz is small enough to visit comfortably without a car. The shopping caters to the wealthy, but the nightlife caters to the sporty, young crowd. To plan your trip, check Trenitalia, Swiss Rail or RailEurope. The Bernina Express runs year-round.

For those seeking more out-of-the-way places, Upper and Lower Engadin Valley provide some charming towns, including Pontresina, Samedan and Guarda.The Bernina Express serves both upper and lower valley with trains that run between Silvaplana, southeast of St. Moritz, to Scuol, near the Austrian border. Whether you enjoy skiing, hiking, photography, or just mountain scenery, the Engadin Valley is both affordable and lovely.