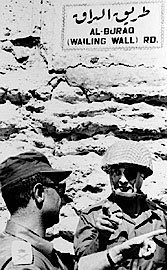 I’ll be General Moshy, he said. You play an Arab.
W

hen Petie caught the State of Isreal he gave me an eye patch as a gift before changing his mind.

That’s how it is in the desert, said Petie. They’re thrifty.

I’ll be General Moshy, he said. You play an Arab.

Petite wasn’t sure. OK, if I didn’t want to play an Arab I could be a gorilla.

The State of Isreal, Petie explained, was filled with Arabs and gorillas who came from Nassir’s Egypt and Gardania until General Moshy fought back and they retook the Gamma Strip.

It was, Petie announced, a real, live war.

In what region? I asked.

This annoyed Petie, whose father, he once told me, was a political “antapologist,“ which was a man who studied why people unexpectedly got strange faces in Africa.

Yes, he confirmed, the war between Isreal and the gorillas had happened in the East.

Anyway, I should play a gorilla.

Just jump and yell and run after me, said Petie. You know. Be scared.

General Moshy was the man was the tank boss of the State of Isreal who wore an eye-patch and pushed his enemies back to Shalom, which was near the Gamma Stripe. After that, they said a prayer and more tanks arrived. Finally, Nassir’s Egyptians, the Gardanians and the gorillas all gave up and sulked home. That was the war.

But what was it about?

The Isreal people (whose name derived from being “real”) and General Moshy believed in a Chosen God for the Amish People, with, like, lots of candles and chants. They were Hermitics, which was like, well, how when you pay attention to God and do what he says in the desert you become a nation. That’s also how you get tanks.

And the Arabs and the gorillas?

They, said Petie, had another God called Müller, which even though it sounded German wasn’t because they wore black pajamas and sang their prayers all day long and had bad skin in the morning like girls. The Arabs were mostly old, like my father, but the gorillas were younger and they had exploded planes to get back the land they thought was theirs and to amuse themselves when it got hot.

Anyway, it didn’t really matter. They were always at war.

So it was that Petie named our game “The Always War.”

He wore his eye-patch in the alley and hid behind the rock in the Gorman’s back yard. This was named Fortress Isreal behind which General Moshy schemed and prepared his rocket grenade attacks, consisting mostly of smooth stones tossed at unexpected angles over the top of the garage roof. “Got you, gorilla!” he ‘d shout, or, more boldly, “Shalom!”

As the assigned gorilla my tactics were somewhat less conventional.

I hid behind bushes or snacked on candy bars while plotting revenge. I thought about stripping Petie of his eye patch and making him complain to his father, who would then tell my father and we’d both have to go to bed early.

Little vices, it seemed to me, were the best part of war.

The only line that came to mind, this being a religious war, was “I hate Müller!”

My lack of energy demoralized Petie, who told me being a gorilla was a serious undertaking and that I wouldn’t be allowed into the war unless I took my role more seriously. I was, well, a “defeetest,” which was the worst kind of gorilla. How could General Moshy swing into action if all the gorillas were tame? This was, after all, “The Always War.”

Petie left me standing in the alley, my gorilla bandana hanging loose.

Demoralized, I walked home. My father sat in the lounge chair reading the afternoon newspaper.

Where, he asked gently, have you been?

I was a gorilla in Isreal fighting General Moshy in the Gamma Stripe during the “Always War” but Petie had called me a “defeetest” and now I had nothing to do but sulk.

My father, normally unflappable, put down the newspaper and looked like he was thinking hard.

Did I do the wrong thing? I asked.

No, not the wrong thing. But don’t worry about Petie or about your General Moshy.

Because your always war will be around for a long, long time.

Gamma, he said, was Gaza; Nassir was Nasser, Müller was Allah… and so it began, for me, and has since continued: