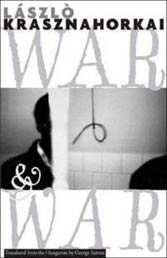 Former small-town Hungarian archivist György Korin is on the run, both literally and metaphysically. In his dull research he’s stumbled by chance on an arcane, indecipherable family manuscript that fits no known category. To Korin, at once lucid and lunatic, its discovery establishes three trajectories: First, that he must travel to the center of the known universe, its Babel, New York City; second, that he must give the words eternal residency on Internet; third, that once he’s completed these tasks he should end his own life, which following the completion the list of tasks lacks all point and purpose. To those who meet the vagrant-like Korin during his wanderings, he’s harmless but mad. They include a gang of hoodlum boys on the outskirts of Budapest, an abusive Hungarian translator who serves as his Bronx landlord, his battered Puerto Rican companion Maria, and a guard at a museum in Switzerland. All find themselves on the receiving end of parts of his Homeric telling of the manuscript’s time machine-like story, which the rapt Korin, “face like a bat,” recounts in long, beautiful, and maddening sentences rich with wave upon wave of essential ideas about human existence. The manuscript’s four wise men, he says, are at once in Crete, in ancient Rome along the Hadrian Wall, in Cologne for the building of its cathedral, in Venice for the election of a doge, and in Genoa awaiting news about whether Columbus has successfully reached the New World. These men, Kasser, Bengazza, Falk, and Toót, are like compass headings made witness to some of the most noble events in human history, but at the same time forced to realize, and Korin with them, that there’s no transcendence, no way out, “for their path leads but from war to war, and never from war to peace,” since that which is human is also “incapable, and will always be incapable, of just one thing, that is controlling that which he has created…”

In tone, texture and allegorical sweep,László Krasznahorkai is the only living European writer who can be called an heir of sorts to the late W.G. Sebald. His torrentially skilled musings dispense with the conventional moorings of narrative sequence and ordered time to illustrate a constantly evolving situational transcendence, a vivid parallel universe over which the author has terrifyingly crystalline control. His narrators, modest but stricken with illumination (Korin is “a tall, thin, middle-aged person with a small bald head, feverishly burning eyes and enormous protruding ears”) are freakishly anointed pawns in a cultural travelogue that tries to make sense of history and the many terrors of transcendent intellect. Man, who must endure life, the “mother of all street fights,” is also beholden to the melodies of the past, sounds both huge and mystifying. The two Ks, Korin and Krasznahorkai, curse a “mankind that enjoys control of the mechanism whereby it may reduce and falsify the essence of things and make that reduced false essence the cornerstones of the deepest laws of our existence…”

Here is a uniquely revelatory novel with a passport to places that entire bodies of literature can take centuries to reach, if they ever even get there. Szirtes’ translation is a masterpiece of its own.