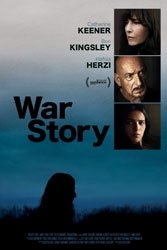 In an unnamed Sicilian coastal town, deeply traumatized American war photographer Lee (a superb Catherine Keener), fresh from watching her companion murdered during the Libyan civil war, decamps into the dank shadows of a local hotel to seal herself off. In a claustrophobic haze, she thinks she recognizes a woman she photographed, who turns out to be a young and pregnant Tunisian refuge named Hafsia (French actress Hafsia Herzi), whom she becomes obsessively determined to help.

Director Mark Jackson’s twilight-tinted, anti-sentimental tale is in fact a war story, but about two kinds of survivors: one with New York refuge, should she seek it; the other caught in the alien, dispossessed limbo that is southern Italy as faced by North African boat people.

Jackson is astute at many levels. He captures rivalries and pettiness among the Sicilian hotel women – who have no fondness for pushy Lee, as well as the double-ostracism faced by young women exiles, cut off and made perishable by rape. With greater and lesser success, he walks the tightrope between Italian anti-immigrant racism and a portrait of two shattered, grief-stricken souls, both migrants of a sort. Their rage and frailty transcends their actual circumstances, sketching out a netherworld more potent than civil war headlines could ever suggest. At one point, Hafsia asks, “Why do you think you know people you don’t know?” — to which Lee has no answer, but it is humanity of recognition, and feral empathy, that matters here. Clues, not answers, are Jackson’s means to ambiguous ends.

Ben Kingsley puts in an enigmatic cameo as Lee’s mentor (“What did they do to you?”), but by the time he appears the dye is cast. Most of the movie was filmed in the Sicilian town of Caltanisetta, making credibility an additional virtue.