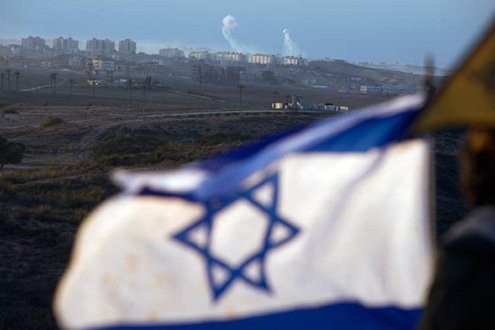 A view of the airstrikes in Gaza from the Israeli side of the border.
D

ecember is past, and with it the uncomfortable Christmas season, which for me meant too much work followed by too few days of exhausted peace and quiet near the hills of Assisi. After five days gorging on panettone and lox (but not together), my girlfriend and I returned to Rome rejuvenated and ready to begin the New Year in style. We had been off-line, in a house with no television, and we had no idea what had been going on while we had our feet up. As soon as I opened my computer I received a chat from my friend Yoni in Israel. “We’re hoping for the best, ” he wrote. “We’re at war. Again.”

Since then I have been glued to online newspapers and blogs — Israeli, American and Italian. I have had many follow-up conversations to the Second Lebanon War two and a half years ago. Somehow, as a Jew and a supporter of the State of Israel, I have become one of many unofficial spokespeople for the beleaguered little country on the other side of the Mediterranean Sea.

Many times I have been asked, “Do you think Israel is justified in this war?” Of course, most people don’t call it war. They call it “bombing” or “killing innocent Palestinians” as if that were the reason Israel is at war with Hamas.

They don’t consider how few civilians have actually been killed, or that many of them were warned beforehand, and that each of them is a victory for Hamas and a tragedy for Israel. They predictably invoke the concept of “asymmetrical” or “disproportionate” response, as if the only proper way to fight back against Qassam rockets launched on Israeli citizens was to launch Qassam rockets at Gazan civilians. Perhaps if Israeli soldiers entered Gaza with rocks in their hands people would be satisfied. Is this what they mean by “symmetrical warfare?”

Anyone who has bothered to inform themselves about the history of Israeli-Arab relations cannot feign ignorance.

Anyone who has followed the last eight years of Islamist violence in the world, from 9/11 to Mumbai, cannot pretend they do not know who Hamas is. After all, Hamas does not hide its intentions. How many have bothered reading their charter, available by simply googling “Hamas charter”? An excerpt: “Israel will exist and will continue to exist until Islam will obliterate it, just as it obliterated others before it.” It is an insane document. I can’t fathom anyone from a Western democracy thinking these people would make good neighbors. Israel is at war with Hamas, not the Palestinians.

Italy is always pulled apart by conflict in Terra Santa, the holy land. The pope, in his Angelus blessing, cannot help but vaguely invoke dialogue as the solution to all conflict. He has never met Hamas. I would invite him to go and visit Gaza for a week and try to talk to them himself. Of course, he would want an Israeli escort.

Meanwhile, Italian politics go berserk. There are the ubiquitous flag-burnings in Milan and Rome by the hard left. The established Communists then try to dissociate themselves from the radical elements it has helped to stoke. The right is unequivocally pro-Israel. The newspapers wage their own war for the public mind. What is a poor citizen to do?

There is a website called Informazione Corretta which is entirely dedicated to monitoring the Italian media on the subject of Israel. They publish anything that appears in Italian newspapers, often with corrective commentary, and the paper’s email at the bottom of the page so readers can send their own thoughts directly to the editorial offices. Whenever there is conflict brewing with the Palestinians, there is so much misinformation published that an entire defense network has cropped up in its wake.

Let’s consider these two headlines, both from Jan. 4, 2009 (the day after Israel entered Gaza): “Israel enters Gaza” and “Gaza Burning” The first describes an action that took place. The second implies that an entire territory is literally in flames. One is descriptive; the other is sensationalism. This problem becomes far more serious when you consider the vast sea of information thrust on the public. Who to listen to? Whom to trust?

We see it every time Israel is at war, every time it is pushed to defend itself. Swastikas on the walls in front of Jewish-owned businesses, Israeli flags burned in public squares, defaced gravestones in Jewish cemeteries, graffiti on the walls saying “Jews out of Palestine!” Amos Oz, who fought three of Israel’s wars, pointed out that in the 1930’s the walls of Europe were dirtied with the opposite slogan, “Jews, go back to Palestine!” This should give us some idea of what goes on in the European mind when Israel is in the news.

Antonio Polito, director of the Italian daily Il Riformista, wrote the following sentences in response to a recent article by Tariq Ramadan on Gaza. I think they sum up well the historical debt Europe owes Israel.

“We Europeans consider Israel an integral part of our history and civilization. We are always is support of its right to exist and the right of its people to live in safety; therefore, we can never accept or respect anyone who contemplates its destruction.”